They Saved the Worst for Last: Why Trump's Impending December Tariffs on China Should Be Rolled Back

The on-again, off-again nature of President Donald Trump’s trade war with China makes it hard for spectators to keep up with the action. As we approach a possible “Phase 1” deal, though, it is useful to see why Americans should welcome a rollback in the impending final rounds of China tariffs.

In August 2019, the Trump administration divided the previously announced final set of China tariffs into two batches. The first batch was implemented on September 1, when 15 percent tariffs were placed on clothing and accessories, among other goods. Meanwhile, the second batch of tariffs—this time taking direct aim at toys, laptops, cell phones, and other electronic devices, the so-called Part 4B tariffs—was delayed until December 15.[1] The administration took these actions to punish China for preventing US access to the Chinese market and for violating US intellectual property rights, as alleged in a Section 301 investigation report released in March 2018.

Trump administration members have stated they believe that some US tariffs must remain in place to promote Chinese compliance with whatever deal is finally reached. However, they have suggested a willingness to remove some tariffs that have already been imposed or are already teed up. Beijing is reportedly demanding that impending December tariffs be dropped before they sign any deal. Indeed, China seeks a rewind of tariffs back to those imposed before October 2018 on the original $250 billion in US imports.

A quick review of the way in which the Trump administration chose goods for earlier tariff rounds, and the nature of tariffs left for last, shows why the scheduled December round of tariffs should be among the tariffs negotiated away.

No serious deal is in sight on the complaints that initially fueled the trade war, especially China’s violations of American intellectual property rights. But the December tariff round would largely hit products designed and marketed by multinational firms, mostly with components from the United States and its allies, and assembled in non-Chinese-owned factories.

Before September 2019, the administration’s tariffs hit relatively hidden targets—boilers, hoses, motors, etc.—products that voters do not buy directly or that other countries can also ship to the United States. This strategy delayed potential consumer backlash, theoretically allowing political space for the administration to make a deal with the Chinese. In these earlier rounds, tariffs were placed on 82 percent of imported intermediate goods (inputs that manufacturers use in their US-based activities) but on only 29 percent of final consumer goods imports from China. While US-based companies were clearly disadvantaged against competitors manufacturing outside the United States, even those using Chinese-made parts, the pain for American consumers was obscured and delayed.

Only in September 2019, with few options left, did the administration’s actions hit consumers directly, with tariffs placed on 87 percent of textile and apparel imports from China.

US imports from China are largely concentrated in a few manufacturing industries (table 1). These sectors include computers and electronic products (36.5 percent of 2017 total US imports from China), electrical equipment, appliances and components (8.7 percent), miscellaneous manufactured goods (8.2 percent), machinery (7.0 percent), and apparel and accessories (only 5.8 percent, contrary to popular perception).

Three of these sectors account for 55 percent of the administration’s actions against China in retaliation to allegedly unfair practices. Trade taxed up to September 2019 is largely in computer and electronic products (29 percent of the original $250 billion list), electrical equipment, appliances, and components (13.7 percent), and nonelectrical machinery (12.5 percent), while apparel was largely untouched (table 1).

Another round of tariffs in September and those planned for implementation in December are also focused on a few sectors: apparel and accessories, which account for about a quarter of the value newly taxed on September 1, plus computer and electronic products, and miscellaneous manufactured commodities. If the December tariff round occurs, tariffs will be imposed primarily on US imports from China of computer and electronic products, with more than half on just two products—cell phones and laptops!

Table 2 column 1 shows that the combined September and December tariffs will result in new taxes on 92.5 percent of apparel and accessories imports from China. Also seen in table 2 is the broad coverage (88.2 percent) of imports classified as miscellaneous manufacturing (which includes toys). These new tariff rounds would impose tariffs on an additional 63.5 percent of computer and electronic products imported from China.

Importantly, the sectors that are going to feel the full brunt of the Trump administration’s trade war are dominated by US-based companies dependent on parts and components made through global value chains. While seeking to punish Chinese behavior, these tariffs will harm and handicap US-based activity. Table 2 column 2 demonstrates this self-destructive aspect of US policy.

Affected transactions include a heavy dose of those that occur between US-based companies and related-party enterprises in China, including their subsidiaries and affiliates.[2] This related-party trade accounts for 38.7 percent of US imports from China in computers and electronic equipment, 31 percent of nonelectrical machinery, and about 20 percent of electrical machinery and miscellaneous manufactures. Impeding this trade through tariffs is unlikely to impact Chinese firms suspected of intellectual property violations.

Also affected by this self-destructive approach is trade carried out by multinational firms operating in China but heavily dependent on product design, engineering, and marketing by US-based entities. This type of trade is exemplified by Taiwanese subcontractors, such as Foxconn, who assemble devices designed and engineered by American companies using suppliers chosen by the US company. Table 2 provides an estimate that captures these exchanges in addition to related-party trade, showing each sector’s imports shipped by a foreign-invested enterprise (FIE) in China (column 3), including wholly owned foreign enterprises (column 4) or joint ventures (column 5).[3]

The share of trade in each sector that flows from FIEs operating in China is derived from China Customs Records for 2013, the most recent year available.[4] We then apply these shares to US trade values for 2017.[5] Finally, each product identity (HS 6 sector) is mapped to a unique industry classification (NAICS code) and aggregated using trade shares as weights.[6]

Accordingly, column 3 of table 2 shows that more than half of US imports from China in each included sector, except apparel, come from these FIEs. The most important flows by value, imports of computer and electronic products, are largely shipped (88.6 percent) to the United States from China by a multinational firm operating there. Moreover, we estimate that wholly owned foreign enterprises provide 68.5 percent of computer and electronic products shipped to the United States while Chinese-foreign joint ventures ship another 20 percent. Less than 12 percent of exported computer and electronic products are shipped by entirely Chinese-owned firms. Almost half of imports of electrical equipment, nonelectrical machinery, and miscellaneous manufactured commodities are shipped by wholly owned foreign enterprises.

One possible complication may be that the targeted products within these sectors are perhaps less likely to originate in FIEs than these averages suggest. Information on ownership derived from China Customs Records, combined with US lists of products subject to each tariff round, leads to several conclusions. Figure 1 column 2 shows that the September 1, 2019 tariff round covers most imports of apparel and accessories and a little more than a quarter of miscellaneous manufactured commodities. The December tariffs will land squarely on miscellaneous manufacturing and computer and electronic devices. These targeted imports are primarily from foreign affiliates operating in China, and to an extent greater than suggested by averages for all imports in these sectors. 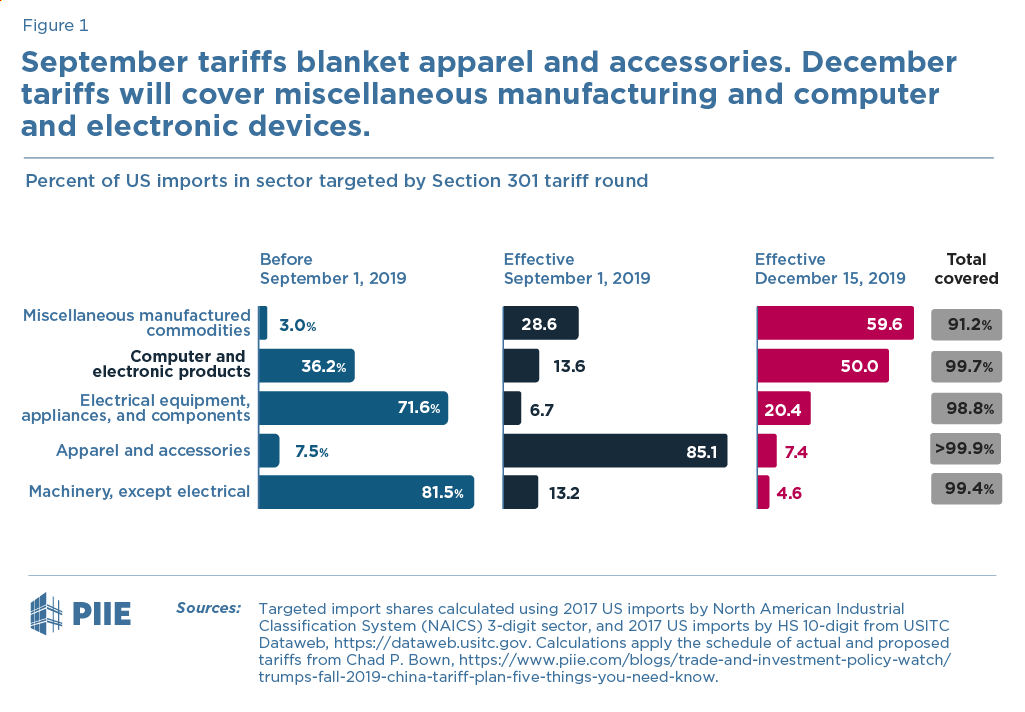 Figure 2 shows that imports in the two sectors hit hardest by the December tariffs are shipped mostly from multinational-owned factories. Indeed, an estimated 95.2 percent of computer and electronic products scheduled for new tariffs in December are from multinational enterprises. 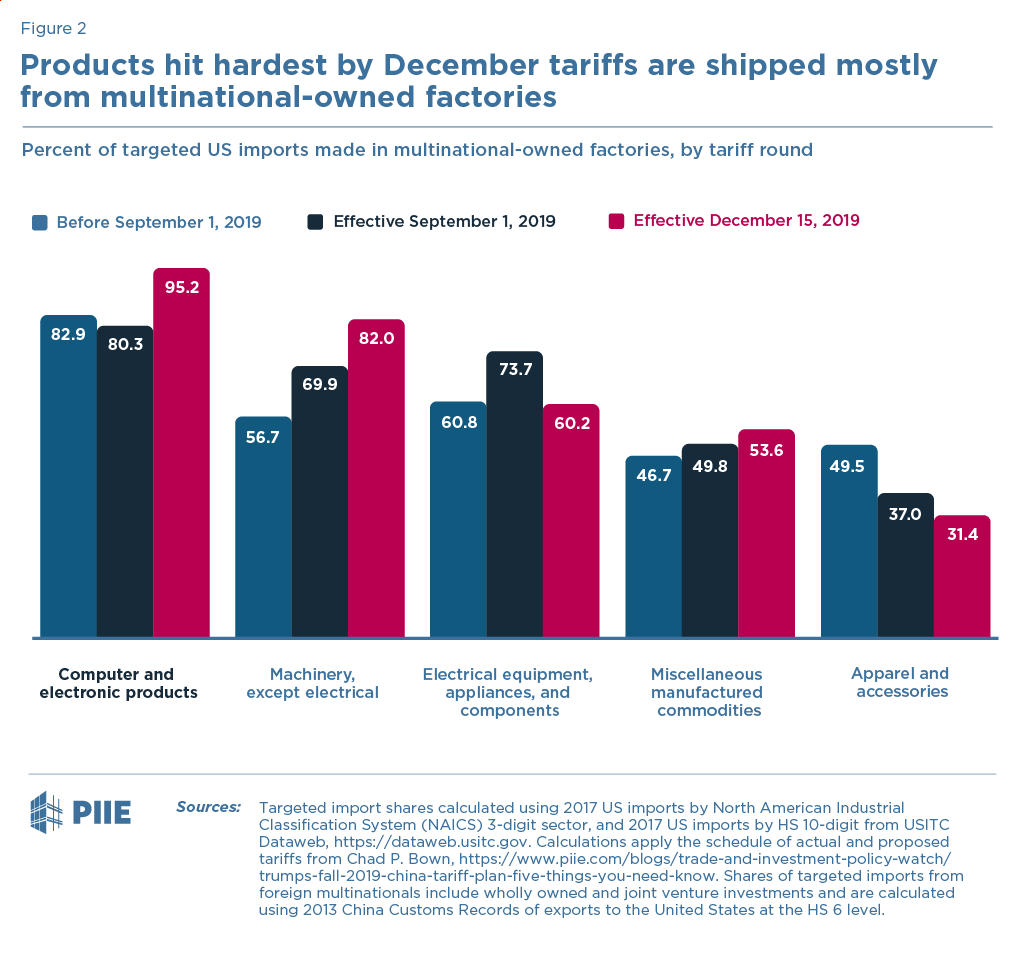 Bottom Line: Trump’s December Tariffs Will Be Costly and Ineffective

The research presented here shows that 60 percent of the estimated $160 billion of imports scheduled for new tariffs in December will be computers and other electronic devices, mostly cell phones and laptops. Who will bear the burden of these rising costs? Some subcontractors in China may end up swallowing the cost. But most of these exporters are non-Chinese-owned multinationals operating in China, such as the Taiwanese firm Foxconn, and many are affiliated with the US-based importers. Any burden they bear reduces earning for US-based companies or those of our allies and will do little to motivate Chinese reforms.

Unavoidably, some American businesses and households will pay more for the phones, laptops, and tablets on which modern life now relies. Recent research suggests that this happened in earlier tariff rounds, as prices rose to fully reflect the new taxes.

It is possible, of course, that American technology companies absorb the cost of tariffs and do not raise retail prices, eroding their profit margins compared with their non-US competitors. Added together, these possibilities demonstrate that Trump’s tariffs leave no place to hide the rising costs for Americans. Rather than placing pressure on the Chinese beneficiaries of misappropriated American technology, the tariffs burden US consumers and the companies where they work.

1 In mid-September, President Trump deferred an announced increase in the duty rate for other previously taxed imports, as a goodwill gesture for restarting negotiations.

2 Related-party trade includes transactions between (a) a parent company and its subsidiary; (b) subsidiaries of a common parent; (c) an entity and its principal owners; and (d) affiliates.

3 One aspect of the Section 301 investigation is the contention that China forces investors to transfer technology to domestic partners within joint ventures. Access to detailed China Customs Records allows us to estimate the share of trade in each sector that originates in joint ventures between a domestic Chinese enterprise and a foreign enterprise and the share that comes from wholly owned foreign enterprises.

4 China Customs Records provide the FIE share of trade at the most detailed, internationally shared level of disaggregation, Harmonized System (HS) 6. We use them to calculate the share of Chinese exports to the United States in each HS 6 sector that originate from a foreign-invested enterprise. These shares update those reported in the May 2018 study, PIIE Policy Brief 18-12, “Trump Tariffs Primarily Hit Multinational Supply Chains, Harm US Technology Competitiveness.” While our earlier analysis relied on China Customs Records from 2006 to calculate FIE shares of Chinese exports, we now calculate these shares using more recent China Customs Records from 2013. As noted in the May 2018 study, the overall share of US imports sourced from foreign-invested enterprises did not fall between 2006 and 2014. In 2006, 60 percent of US import flows originated from FIEs, a share that was virtually unchanged by 2014. Our updated method assumes the 2013 shares are a good proxy for actual 2017 shares.

5 US trade data are from USITC Dataweb. Concordance between different versions of HS provided by Justin Pierce and Peter Schott.

6 The concordance used to map between HS and NAICS is provided by Pierce and Schott.

Anatomy of a flop: Why Trump's US-China phase one trade deal fell short