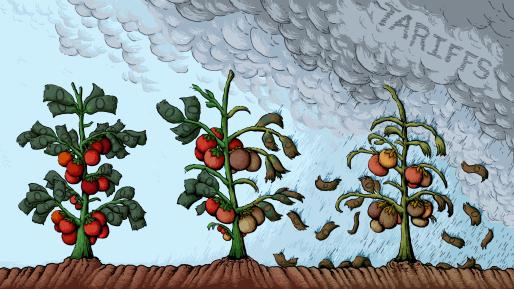 President Trump’s drive to raise tariffs on imports has shifted money from the pockets of consumers to the profits of producers in the manufacturing sector—notably steel, aluminum, and autos. These actions have now inspired farm state lawmakers, in alliance with local agricultural producers, to seek their own barriers, raising the price of tomatoes, bell peppers, blueberries, and other produce.

First, tomatoes. On May 7, 2019, the US Department of Commerce (DOC) announced that it had terminated the Tomato Suspension Agreement with Mexico. Under the agreement (in effect since 1996), DOC promised not to launch trade protection cases against tomato imports from Mexico, so long as Mexican exporters sold tomatoes at or above minimum price levels, which are $0.25 per pound during the period July 1 to October 22, and $0.31 per pound during the period October 23 to June 30.

Following termination of the agreement, US tomato growers will be able to file petitions at the DOC and the International Trade Commission to seek antidumping (AD) and countervailing duties (CVD); if approved, the resulting increase in import prices will allow US producers to raise their prices well above the previous minimums. Indeed, even before the petitions are adjudicated, the DOC will apply preliminary penalty duties of 17.5 percent on imports of Mexican tomatoes. That’s just a start. If the petitions are approved by sympathetic officials at the DOC and International Trade Commission (ITC), American households will pay far more. According to Arizona State University, if US penalty duties slice Mexican tomato imports in half, US prices will rise between 42 and 80 percent.

Then bell peppers, blueberries, and more. Farm state legislators did not stop with tomatoes. Senator Marco Rubio (R-FL) is leading Florida and Georgia lawmakers to facilitate penalty duties on other seasonal and perishable produce such as bell peppers and blueberries. They want Congress to enact a new bill titled the Defending Domestic Produce Production Act (S.16/HR.101). The bill would more accurately be titled the Household Pickpocket Act. It would enable growers in a single region of, for example, Georgia or Florida, to raise national prices of bell peppers, blueberries, tomatoes, and other produce at a moment’s notice.

The US-Mexico-Canada Agreement (USMCA) as leverage. Florida and Georgia lawmakers were keenly disappointed when the USMCA text did not change the US laws to facilitate penalty duties on seasonal and perishable produce. Mexico rightly objected to such changes: They are contrary to common sense as well as rules in the World Trade Organization. Why should a few farmers in a single region dictate national trade policy? But in their renewed legislative push, Senator Rubio and his supporters now threaten to withhold votes on the USMCA. To ratify the agreement, Trump needs a majority in both the House and the Senate. A close vote gives the lawmakers a second shot at laws that would shift money from national consumers to local farmers.

Disrupting supply chains. If successful, Senator Rubio will seriously disrupt the food supply chains fostered by the North American Free Trade Agreement over three decades. Grocery chains like Giant and Safeway, as well as franchised restaurants, now contract with distributors to purchase agreed volumes of fresh produce at specified times during the calendar year. Distributors in turn buy the agreed volumes from contract growers in Mexico and the United States. But once an AD or CVD preliminary order is imposed, distributors must immediately deposit estimated penalty duties for subsequent imports. In their contracts, neither the distributors nor the grocery chains nor the restaurant franchises will have planned for the sudden surprise. Estimated penalty duties imposed at a moment’s notice will create havoc in fine-tuned supply chains. American consumers will pay the price.