In the run-up to the 2016 US presidential election, candidates on both the right and the left have been taking strong anti-trade and foreign investment positions. One assertion on the campaign trail is that globalization is responsible for the decline of the US manufacturing base.

Donald Trump lamented that Americans “don’t make things anymore,” claiming “we have to bring Apple—and other companies like Apple—back to the United States…. We have a great capacity in this country.” Addressing constituents in Flint, Michigan, Bernie Sanders claimed, “Unfettered free trade turned a prosperous middle-class city…into a place where good jobs are scarce and extreme poverty is high,” attributing lost manufacturing jobs in Michigan to “failed trade policies.”

What Is Happening to the US Manufacturing Base? 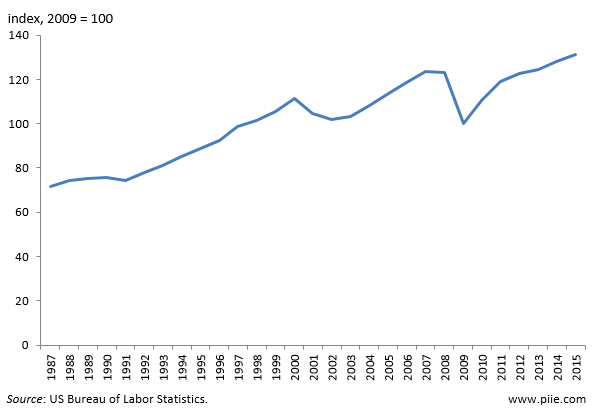 In 2015, the absolute size of the US industrial base—total value added in manufacturing—surpassed the all-time high from 2006–07 and has continued to grow in 2016.

Baily and Bosworth (2014) argue that this US manufacturing output growth has been driven primarily by one subsector: computers and electronics. However, we find that this assertion about computing as the sole driver of US manufacturing productivity is incorrect. Computers are not the only manufacturing subsector exhibiting high growth during the 1990s and 2000s. Other industries, including transportation equipment, medical equipment, machinery, semiconductors, communications equipment, and motor vehicles, all grew at rates well above the manufacturing sector average (Moran and Oldenski 2014).

What Is the Relationship Between Globalization and the Evolution of US Manufacturing?

Global engagement is an important element of US competitiveness. Here is the third surprise: Increased offshoring of manufacturing by US multinationals is associated with increases in the size and strength of the manufacturing sector in the United States.

That is, an increase in outward foreign direct investment (FDI) by a US firm is associated with an increase in domestic US activities by that same firm. Specifically, increases in four variables (employment, sales, capital expenditures, and research and development or R&D) in foreign affiliates of US firms are all positively associated with increases in five variables in the United States (employment, sales, capital expenditures, R&D, and exports).

Imposing penalties on outward FDI by US multinationals will not expand domestic investment or stimulate more R&D at home, let alone make US firms more competitive.

Trade and Good Jobs in the United States Looking Forward

Trade or no trade, the absolute number of jobs in the manufacturing sector is indeed declining. So where will more good jobs be found in the US economy of the future? The answer is high-performance service jobs.

Looking first at the manufacturing sector, we find that the areas for greatest job growth will not be production occupations. Instead, demand will more likely increase for more highly skilled manufacturing workers in areas such as engineering, management, finance, computer and mathematical occupations, and sales. In 2014, traditional production occupations accounted for only about 52 percent of total manufacturing employment (Oldenski 2015). In coming years, we expect that share to fall further. Overall, meanwhile, the manufacturing sector as a whole is not large, only 8.8 percent of total US employment in 2014, and as noted earlier is steadily shrinking. So while the US manufacturing sector is extremely productive and internationally competitive, it is not the most effective area to focus on when looking for sources of widespread job growth.

One of the most promising routes to expand high-performance service jobs in the United States is to pursue service sector liberalization in trade agreements. Here the United States already has a strong international comparative advantage and runs a trade surplus. Hufbauer, Jensen, and Stephenson (2012) argue that US exports of services could amount to 20 percent of sales if tradable business services were sold abroad to the same extent as manufactured goods. But actual US exports of business services amount to less than 5 percent of sales because of sky-high barriers to services trade and investment. The Trans-Pacific Partnership, Transatlantic Trade and Investment Partnership, and other trade and investment agreements will enhance US global presence in high-performance services. Refusing to ratify the TPP or calling for a stand-still on trade agreements will prevent the United States from exploiting its comparative advantage in high-performance service jobs.