Hardly a day goes by without a reminder of the high youth unemployment rates in Greece, Spain, Italy, and other parts of the European periphery, which are in excess of 50 percent. Sometimes the reminders are in the form of rants by economists or pundits about the moral deficiency of euro area demands for austerity and the risks of a lost generation of young people. No doubt the labor challenge for European youth is an outrage, and demands for government action are long overdue, especially in liberalizing the pronounced insider biases making it hard for outsiders to get jobs. The situation is illustrated in figure 1, with measures harmonized to account for differences in methodology, depicting youth unemployment rates in the 15- to 25-year-old age group in the Organization for Economic Cooperation and Development (OECD) countries in Q1 2011, compared with the latest available data. 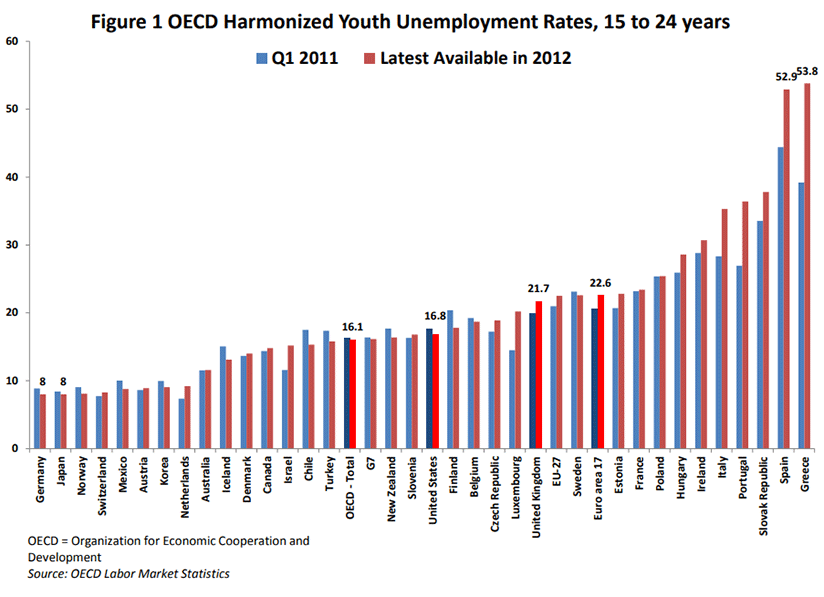 The current OECD average is 16 percent, with the US average marginally higher at 16.8 percent, while the UK and the euro area average lies around 22 percent. Meanwhile, the intra-euro area range is remarkable, with Germany at just 8 percent, the lowest youth unemployment rate in the OECD. Spain and Greece indeed exceed 50 percent in the latest data. Youth unemployment rates have, moreover, increased in the last 18 months in the OECD, and in the four “Club Med” euro area countries of Italy, Portugal, Spain, and Greece. With these remarkable youth unemployment rates, it is striking how limited the social unrest has been.

But as pointed out by Steven Hill in the Financial Times earlier this year, youth unemployment rates are a flawed basis for outrage because of their methodological shortcomings. Unemployment rates are calculated as the share of people in the labor force (i.e., employed or looking for work). But a large share of the youthful cohort is still in school and hence not in the labor force, at least in industrialized countries where educational opportunities are widely available. This means that the actual percentage of unemployed youth is lower than it appears. For example, if 70 percent of the age group from 15 to 24 years in Spain and Greece are enrolled in education,1 and just 30 percent are employed or actively looking for work, a 50 percent unemployment rate would be estimated as 50 percent of the 30 percent in the labor force, or just a 15 percent share of the total. That is not healthy by any means, but it is a lot better than suggested by a 50 percent headline number. It also helps explain why there has not been more social unrest.

Despite the “true level” of youth unemployment in a given country, the poor job opportunities for youth in many countries are a serious concern, because of the negative impact on lifetime earnings and career paths that an early spell of unemployment might inflict on affected young people (the so-called “scarring effect” in economic jargon).

At the same time, several dynamics can affect the impact of a severe crisis on an entire generation of youth. In countries with ample and affordable educational and training options, especially those that went through a cyclical boom before the crisis, one would expect a high movement from the workforce back into education/retraining after the crisis hit. Such a movement would cause a significant decline in the size of the youth workforce. In general, a decline in the size of a country’s workforce is a bad economic development. But if large numbers of youth go from relatively low-skilled jobs into education, the long-term effects are harder to predict. Higher skills could lead to better future career paths, and a school offers a chance to sit the recession out in a safe place.

To better calculate the true idleness and “wasted youth” phenomenon in advanced economies, the OECD calculates the share of youth “not in employment, education, or training” among the total in the 15- to 24-year-old age group. This is the so-called NEET ratio, which comprises “idle youth” in the labor force (looking for work, but unable to find it) and outside the labor force (inactive). Figure 2 shows the developments in the NEET ratio for available OECD countries from pre-crisis Q1 2007 to the latest available data from Q1 2011. 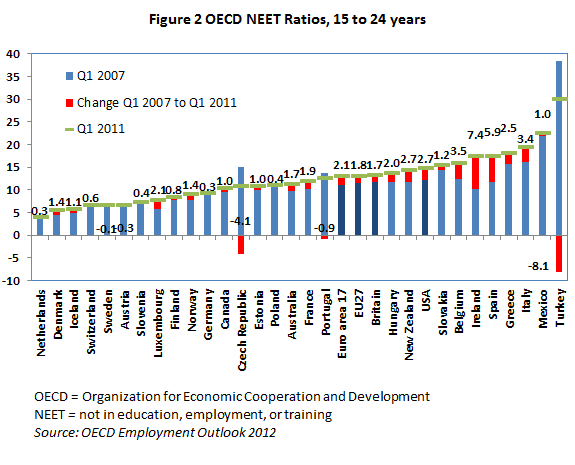 Figure 2 illustrates several important trends. The range within the OECD for NEET ratios goes from less than 5 percent in the Netherlands in Q1 2011 to 30 percent in Turkey, even after Turkey saw an 8 percent decline in its NEET ratio from Q1 2007 (most likely as a result of its economic boom and better access to education). In almost all OECD countries, the NEET ratio has gone up as a result of the crisis. The increases have been most pronounced in some euro area peripheral countries—Ireland at a 7.4 percentage point increase, Spain with 5.9 percent, Italy with 3.4 percent, and Greece with 2.5 percentage points.2. Remarkably, however, Portugal’s NEET ratio has dropped by 0.9 percentage points during the crisis, likely indicating a substantial increase in Portuguese youth going back into education.

It is also clear from figure 2 that—measured on this more genuine measure of “idle youth” with associated long-term “scarring effects”—the euro area peripheral countries look less bad than other OECD countries. Yes, there have been significant increases in Ireland and Spain during the crisis, but the Q1 2011 NEET ratio of these two countries was still only 2.8 percentage points higher at 17.6 percent than the corresponding 14.8 percent in the United States. It is indeed noteworthy that the US NEET ratio in Q1 2011 is higher than for the euro area, the 27 members of the European Union, and the United Kingdom. With an increase of 2.7 percentage points over the crisis, the US rate has increased more than these countries.

In the aggregate, therefore, American youth is today idler and worse affected by the crisis than their euro area and British counterparts. This result likely reflects the depth of the labor market contraction in the United States (which has been worse than the euro area and UK aggregate) and the fact that many American youth have fewer education and training opportunities than in Europe—especially following the dramatic cuts to US state and local government education budgets during the crisis.

Too bad neither President Obama nor Mitt Romney wanted to discuss this outrage in their first debate!

2. Note that figure 1 shows that only in the euro area peripheral countries have youth unemployment increased/decreased markedly since Q1 2011, meaning that it is only in these countries that one might expect the NEET ratio to have increased between Q1 2011 and today.