Despite recent unflattering jokes, France is not an economic basket case. Blessed with numerous competitive high value-added industries, France is also visited by more foreign tourists than any other country in the world. It has also performed far better than the euro area periphery and the islands off the coast of the Continent on the metrics that really matter—real GDP per capita—since the last cyclical peak in early 2008. 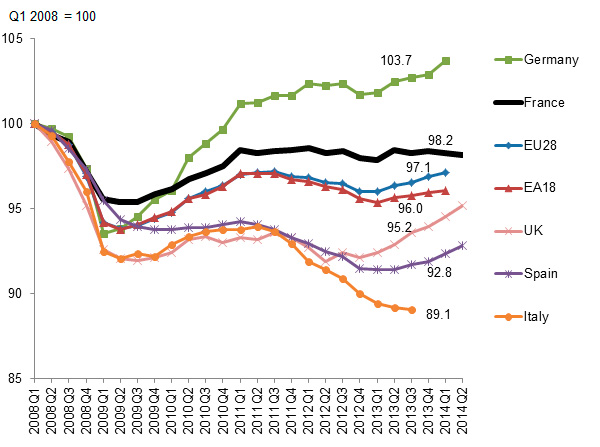 Figure 1 shows how French real GDP per capita, though stagnant since 2011 and not yet fully recovered to precrisis levels has nonetheless remained above Italy (Europe's true large country disaster), Spain, the United Kingdom (for all of Chancellor George Osborne's crowing), and the European average.

Yet France faces plenty of important economic issues that must be addressed. Figure 2 illustrates the toxic French combination of an excessive public sector and sclerotic labor markets. 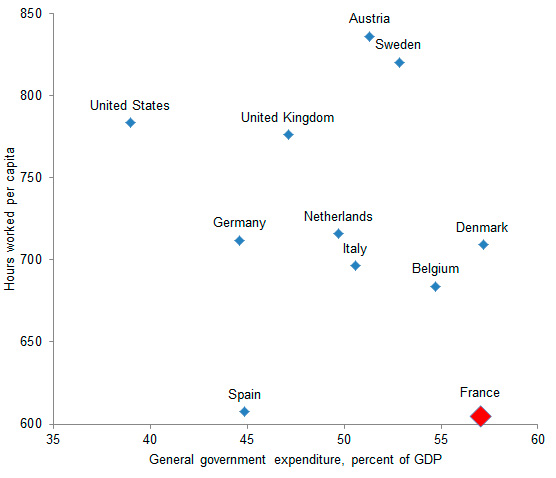 At 57 percent of GDP, the French public sector is larger than anywhere, bar Scandinavia. Yet the French work less on average than any other advanced economy to finance their government (hours worked per capita is the broadest metric available for labor utilization in an economy and takes into consideration inactivity rates, retirement ages, work-sharing from part-time work, and average full-time hours worked). Remarkably, at just 605 hours worked annually per capita in 2013, the labor input of the average French citizen was lower than the 608 hours recorded in Spain—a country with more than 25 percent unemployment at that time!

France's love of leisure is often cited as the reason for this behavior. Yet France has no more legislated and paid vacation and holidays than most other European countries—about 30 a year —and the political system has not responded more than elsewhere in Europe to citizens' demands for leisure. It is also sometimes heard that the French can afford to work less because of their productivity. True, French GDP per hours worked is high, but this assertion overlooks the fact that the figure is an average and many low-productivity workers are inactive in France. If the country managed to improve labor input and employ more young people, older workers, and lower skilled people, average recorded productivity would decline. Ultimately, labor utilization in France is poor because the French labor market is poorly regulated and biased in favor of prime aged "labor market insiders." If this system is not changed, France cannot restore economic growth.

Cut the Presidency Down to Normal European Ceremonial Size

France's semi-presidential political system stands out in Europe, where all other EU members have variations of parliamentary systems, and where the head of government is chosen by a majority of parliamentarians,1 leaving the head of state as president/monarch as a mostly ceremonial figure. The French directly elect their president, who wields considerable political power. The French president chooses the prime minister, though the candidate must command majority support in parliament. Only parliament can dismiss a prime minister who does not resign voluntarily. The president can dissolve parliament and call new elections, and is the commander-in-chief of France's armed forces and its nuclear deterrent. All in all, the president generally dominates French politics, and winning the office is the ultimate prize in the country's political process.

In large heterogeneous countries like the United States, it probably makes sense to elect a powerful executive president to function as a single unifying figure for the nation. But although Charles de Gaulle in 1962 asked "How can you govern a country which has 246 varieties of cheese?", it is highly questionable if French heterogeneity warrants such a semi-presidential system.

The straitjacket of the presidency prevents France from establishing a stable grand parliamentary coalition of the kind that governs most other European countries today. The mainstream center-right and center-left in France will never come together to pass commonsense economic reforms, as each will always try to undermine the others' chance of winning the next presidential election. Cutting the French president's term from seven to five years in 2002 and aligning it with the elected term of the parliament has ironically amplified this penchant for political sabotage, because the next election is always primarily about the winning presidency. Having cohabitation between a president and parliament of different political persuasions does not change this destructive political dynamic.

France's leadership is thus uniquely ill-equipped to deal politically with the region-wide challenge presented by new populist movements encompassing elements of both the far right and far left. The right-wing Front National (FN) in France is a classical welfare-chauvinist European populist party, which on a nationalist (right-wing) platform opposes immigration, globalization, and the European Union, while promising to maintain traditional (left-wing) welfare policies and government protection for the people. In other European parliamentary systems, these types of parties can be politically tamed through majoritarian centrist grand coalitions, typically reducing their influence to specific policy areas (usually immigration policy). In France, however, such maneuvers are not politically possible, and the FN's political challenge is unmet by the ever feuding mainstream parties.

The two-round presidential election system will help undermine the standing of future French presidents. The 2017 presidential election seems already to have become a race for second place. Though Marine Le Pen of the FN is likely to win the first round, she is still unlikely to become president in the second round. But the winner would command a negative political mandate of "not being Marine Le Pen," a leader without a popular mandate to lead or enact the change France needs.

France must change its system, preferably reducing the status of its presidency to the largely ceremonial level seen in other European republics. At the least, it should abolish articles 8, 12, and 15 of Title II of the French Constitution, removing the president's right to name the prime minister, call new elections, and serve as commander-in-chief.

The challenges of today demand that the era of regularly electing a new king and regularly tossing him out again should be over in France.

France's two-round election system for president and parliament is even more detrimental.2 The system was attractive following the frequent parliamentary fragmentation and instability of the earlier Third Republic (1870–1940) and the Fourth Republic (1946–58). But today the system helps perpetuate bizarre political movements,3 especially on the French left, as voters (ideally) vote with their hearts in the first round and with their minds in the second. Two rounds of parliamentary elections produces an electoral process and outcome akin to what happens in the United States as a result of gerrymandering and the two-round system of primary and actual elections. Just like redrawing districts creates "safe seats" for partisan ideologues in the House of Representatives, split first-round votes and often strategically distributed withdrawals in the second round of parliamentary elections ensure that districts are tailored for political utopias.4 This is especially a problem on the French left, as various leftist parties and factions, by agreeing to not stand in the second round against each other, help perpetuate ideological fragmentation electorally, as leftist tea party types on the fringe are virtually guaranteed to win seats in parliament without having to appeal to the median voter. Just as a primary election victory in a safe district ensures a candidates' election-day victory in the United States and incentivizes candidates to appeal to more uncompromising party activists, merely coming in first among a host of leftist candidates in the first round is frequently enough to secure a seat in France. Looney leftist candidates in France can often secure 15 to 20 percent of the vote in the first round, which may be enough to come in top among leftist candidates and—in left-leaning districts—win in the second round, as others on the left fail to qualify or drop out. The leading leftist candidate then faces one opponent from the right.

The Socialists have thus never been compelled to modernize and appeal to the median voter, depriving France of the sort of large, relatively homogenous and modern center-left party that exists in other European countries. Hollande may be an excessively consensus-seeking former Socialist party chair and hence a poor president, but he presides over a leftist coalition in France whose ideological dispersion is cultivated by a dysfunctional parliamentary election system.

It is, as Prime Minister Valls recently noted, time for France to "finish with the old left."5

Setting a high minimum voter threshold, perhaps similar to the German 5 percent of votes, for any party to win, would help avoid fragmentation and a proliferation of parties. Without reform, France seems unlikely to return to the pinnacles of Europe.

1. Strictly speaking, a positive majority is not always required, but at least a prime minister cannot lose an official vote of confidence in the government.

3. The 2012 presidential candidates representing outfits like the Left Front (Front de Gauche), New Anti-Capitalist Party (Nouveau Parti Anticapitaliste), and Workers' Struggle (Lutte Ouvrieve) received about 13 percent of the vote in the first round.

4. Most of these exist on the French left, though the same logic exists on the French right, which however historically has been more politically disciplined and relatively less fragmented.

France, Germany, and Italy press ahead to spur their economies