There Is No Inflation Puzzle

Some economists are puzzled over why US inflation has remained low while the economy has reached, or even exceeded, potential employment. Commentators have argued that central banks are wrong to place too much faith in the Phillips curve model, in which inflation responds to deviations from potential employment, but the policy conclusions they draw are diametrically opposed. Some say there is no need for the Federal Reserve to tighten monetary policy, whereas others say the Fed should tighten faster.[1]

Yet inflation is behaving exactly as the Phillips curve would predict. The decline in the US unemployment rate is too recent and too small to have caused any significant rise in inflation to date. Inflation is likely to pick up a bit next year, which supports the Fed’s tightening path, albeit with a considerable degree of uncertainty.

The true puzzle from the point of view of a simple Phillips curve model is the lack of much downward movement in inflation in 2010–14, when the economy was far below potential employment.[2] But this puzzle is easily explained by the fact that workers and firms strongly resist outright declines in wages and prices. Research shows that, when overall inflation is significantly above zero, the price changes of individual goods and services form a classic bell curve shape around the average inflation rate. But when overall inflation is close to zero, the bell curve is distorted at zero because there is great reluctance to cut prices. Even large amounts of economic slack fail to induce many firms to cut prices and wages. 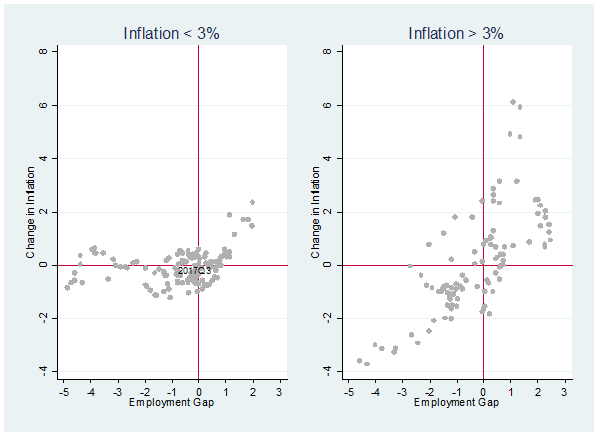 Note: Change in inflation is the four-quarter percent change in personal consumption expenditure (PCE) index prices (excluding food and energy) minus the average percent change over the previous three years. The employment gap is the Congressional Budget Office estimate of the natural rate of unemployment minus the actual rate of unemployment as a percent of the labor force. The employment gap is lagged by four quarters. The split between left and right panels is based on four-quarter inflation as of four quarters earlier.
Sources: Haver Analytics and author’s calculations.

The unexpected drop in inflation in mid-2017 is not particularly large in historical context. The figure displays the location of the latest observation (2017Q3), which is well within the historical Phillips curve experience.[5] In February 2017, the unemployment rate was equal to the estimated natural rate of 4.7 percent. By October 2017, it had dropped to 4.1 percent, implying that overall employment was 0.6 percentage points above potential. Based on the Phillips curve, we would expect inflation to rise by about half a percentage point over the next year. But historical experience suggests that inflation may end up anywhere from 1 percentage point lower to 3 percentage points higher. In other words, the Phillips curve remains an important fundamental driver of inflation, but we should not overstate the precision with which it operates.

2 My colleague Olivier Blanchard recently circulated a working paper on the natural rate hypothesis that lies behind the Phillips curve in which he examines the stability of estimates of potential employment and the formation of expectations of future inflation. Blanchard does not examine the impact of downward wage and price rigidity, which is the focus here.

3 The gap is four quarters earlier to allow for the lagged effect of employment on inflation.

4 I have constructed similar figures using GDP prices and the Federal Reserve’s capacity utilization index for mining, manufacturing, and utilities. Inflation expectations are from the Federal Reserve Bank of Philadelphia’s survey of professional forecasters.

5 Indeed, a similar figure based on GDP prices displays a small positive change in inflation in 2017Q3.

The Fed Is Looking for an Excuse to Cut Rates

Rethinking the Phillips Curve: Inflation May Rise Modestly Next Year