The Socialist Dilemma of François Hollande: To Be Schröder or Zapatero?

Despite his cultivated image of "Mr. Normal," President François Hollande of France remains an enigma on the European policy scene. What kind of socialist president will he be in the next five years? At a time when the euro area crisis has gradually forced leaders and policymakers to undertake overdue structural reforms, which have mired the periphery in crisis and recessions, a still complacent France is increasingly becoming the true structurally sick man of Europe, hampering its ability to compete internationally. The International Monetary Fund (IMF) did not mince words in its latest Article IV review of the French economy, stating bluntly in the first paragraph:

The growth outlook for France remains fragile reflecting weak conditions in Europe generally, but the ability of the French economy to rebound is also undermined by a competitiveness problem. As financial stability risks abate, and with the prospects of a gradual resolution of the euro area crisis, France's competitiveness gap emerges as the main challenge for macroeconomic stability, growth, and job creation. 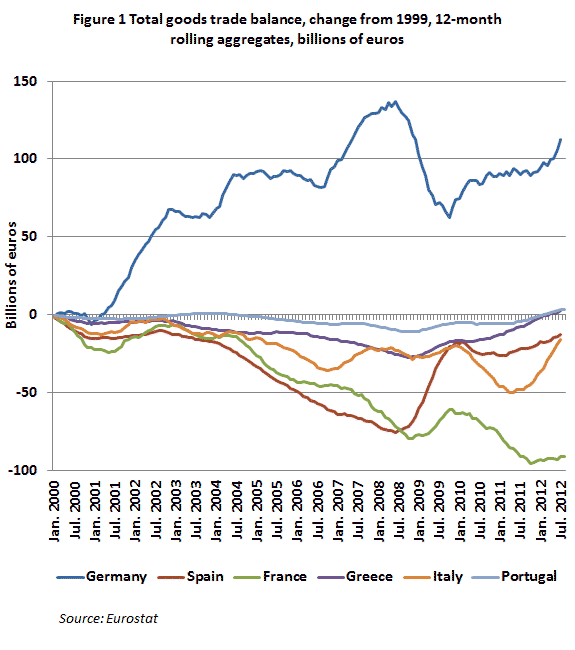 Figure 1 makes several things clear. First, Germany in the early 2000s dramatically improved its goods trade balance with the rest of the world. Second, the goods trade balances of the Southern euro area periphery deteriorated after 1999, although all balances improved somewhat after the global financial crisis in late 2008 and especially the beginning of the euro area crisis in late 2009. But for France, figure 1 is grim reading. It suffered the external deterioration of the Southern periphery during the early years of currency union and also has experienced little of the post-crisis Southern peripheral improvement. Consequently, France is today the euro area's premier deficit country.

Now a portion of the recent Southern peripheral external balance improvement is cyclical and far from welcome. The gains actually reflect a recession-driven deterioration in imports. But as figure 2 illustrates, there have been substantial increases in Southern peripheral goods exports. 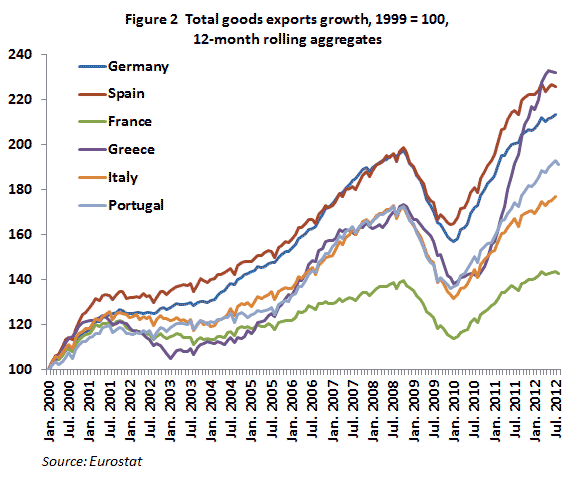 Indeed figure 2 illustrates how both Spain and Greece have experienced larger percentage increases in goods exports than Germany, when measured from the beginning of the euro era. In 1999, Germany's share of goods exported as a percentage of GDP was higher than that of other countries. Hence its increase since then has a bigger domestic economic impact. But figure 2 nonetheless illustrates the error of condemning the Southern periphery as invariably uncompetitive in the goods trade area. There is reason, moreover, to expect that structural reforms there will continue to spur these export growth trends in the years ahead. The surge in imports in the Southern periphery is now a thing of the past. (It was probably a bigger factor in the buildup of external deficits than the euro introduction.) Accordingly, external rebalancing in the Southern periphery is growing and likely to last.

All of this is (relatively) bad news for France, however. As figure 2 also illustrates. France's export performance has lagged since it joined the euro. In short, the better a reforming Southern periphery does, the worse France looks in comparison.

France's increasingly obvious status as the new "sick man of Europe" is surprising for several reasons.

1) French public debt is only marginally above Germany's at around 90 percent of GDP.

2) The French budget deficit has declined by 3 percent from the peak. The IMF forecasts it to be 4.7 percent in 2012 (in part because gradual and growth-friendly fiscal consolidation is being implemented).

3) Long-term increases in age-related spending are very small according to the IMF's latest Fiscal Monitor.1 This is largely due to pension reforms instituted by former President Nicolas Sarkozy—steps that Hollande has reversed in part by authorizing people who have worked continuously for 42 years to once again retire with a full pension at the age of 60.

4) France, with persistently higher fertility rates, has among the best long-term demographic outlooks in Europe, improving its relative long-term potential for growth.

Hollande faces a basic political choice in the coming months. Will he be a preemptive center-left reformer in the mold of former Chancellor Gerhard Schröder of Germany, who set Germany on the path to economic and political dominance following his election victory in 2002 over the center right candidate, Edmund Stoiber? (Schröder's action broke with ten years of German economic ossification after reunification a decade earlier.) Or will Hollande be forced to take the role of center-left reformer like former Spanish Prime Minister José Luis Zapatero, who for years had denied that anything was wrong in the Spanish economy and banking system, until market forces (and the European Central Bank) convinced him otherwise?

It should be noted both Schröder and Zapatero lost their subsequent elections. But history will judge Schröder as among Germany's and Europe's great early reformers. Moreover, Schröder might even have survived as Chancellor had he not called an early federal election in 2005 (following a regional election loss in Nordrhein Westphalia). Hollande faces no similar pressure. His term is five years, and not four as in Germany. Assuming that comprehensive structural reforms take three to four years to implement, as was the case in Germany, he should embrace Schröder's mantle and reform France early in order to reap the political and economic benefits before the next elections in 2017.

So far François Hollande has avoided committing himself to comprehensive reforms, exhibiting an encouraging "Mitt Romney-like character" of brazenly reversing himself on political positions previously taken. He ran as the Great Keynesian Hope. Yet after the French parliamentary elections, he began implementing an austerity budget in line with European Union (EU) prescriptions. Last week, in another hopeful sign—following receipt of another report on French competitiveness, from former head of EADS Louis Gallois—Hollande pivoted 180 degrees on the need to implement an "internal devaluation" in France, i.e., lowering costs to make exports more competitive. During the presidential campaign, Hollande had rejected Sarkozy's proposal to lower the social contributions for workers, paid by French employers, to be funded by increasing the French value-added tax (VAT). (The objective was to shift taxation from labor taxes to generally less distorting consumption taxes.) Hollande, at the time, cited his concern about the potential loss of purchasing power for the French consumer and hence the potential negative impact on growth. He was paying homage to the truism in France (as in the USA) that private consumption is the most important component of growth. This month, however, following the Gallois report (and the IMF Article IV report cited above), the French government is proposing to lower social charges by €20 billion over three years, while increasing several parts of the VAT to finance it.

France's biggest competitiveness and structural problem, however, remains its archaic and dysfunctional labor market regulation, under which unions with memberships of a fraction of the private work force dictate wage and labor conditions for the entire country. The unions are thus zealously protecting that dinosaur of the long discredited "lump of labor" fallacy, the 35-hour work week. If France does not scrap these straitjackets, its economic decline will continue.

Hollande has accepted this diagnosis and tasked the social partners under the guidance of Labor Minister Michel Sapin to agree on labor market reforms by the end of the year, or face the prospect of government legislative action. Given the militant 1920s mentality of several labor unions, a compromise appears unlikely by this timetable. Hollande will therefore probably have to push legislation to implement these changes next year, with the likelihood of protests from his labor allies.

Whether he will commit his political capital to serious labor market reform in early 2013 is not simply the litmus test of whether Hollande models himself as a Schröder or a Zapatero. It also looms as the biggest downside risk to the euro area. If Hollande does not commit himself to these reforms, the economic situation in France will have to deteriorate considerably more before the combined market and euro area political pressure ultimately forces his hand.

Based on what we have seen, the odds are marginally in favor of Hollande being serious about  reform in France in early 2013. On the other hand, such adjustments have eluded French presidents for decades, even as they have become increasingly mainstream in the rest of the euro area. The disruptive capacity of French labor unions cannot be dismissed. Ultimately, the outcome of the impending political clash will be determined by Hollande's political courage and whether the French remain sufficiently detached from economic reality to resist reform.

If Hollande fails, he will be written off as a credible partner by Germany in Europe. Berlin will increasingly orient itself toward other euro area capitals, derailing the Franco-German integration locomotive in Europe and posing new challenges to the long-term political integration of the euro area.

Without reform, market pressures will at some point return to batter France and indeed the euro area more broadly, because the periphery seems likely to suffer substantial collateral damage from renewed market pressure on France.

The current situation in Spain meanwhile has seen the return of the deadly politics of merely avoiding the worse outcome. Much to the chagrin and in defiance of the prediction of this author, Prime Minister Mariano Rajoy does not want to apply for a bailout from the European Stability Mechanism/European Central Bank (ESM/ECB). He appears to be afraid that if he were to take such action, there would not necessarily be any noticeable improvement in Spanish interest rates, as the ECB might not intervene to push them down even further. No political leader has ever gotten political points from taking a tough decision to merely avoid a worse outcome (in this case a renewed market attack on Spain). Thus the ECB's resistance to providing assurances to Rajoy that Spain would benefit from a bailout request keeps the prime minister on the sidelines. The ECB's pledge to backstop Spain's borrowing needs is credible because markets believe that renewed pressure on Spain will trigger a bailout request. But ironically, that situation raises the potential cost to investors of shorting Spain's debt: shortsellers risk ending up on the wrong side of the ECB's bazooka, and consequently market pressure on Spain becomes less pronounced, the exact opposite of what some European and ECB leaders want.

The good news, however, is that this catch-22 does not apply to France. The probability of Hollande seeking aid from the ESM/ECB in the face of renewed market pressure is zero. Hollande would never get away politically with stooping to get a (German led) euro area bailout. Thus the ECB is a non-factor regarding French assets. Market participants who want to short France can sleep quietly. The more bearish they are on France, the more this view will take hold in the markets, thereby hopefully building expeditious  market pressure on France, and strengthening Hollande's hand on reform.

So, if you are bearish on the euro area and fearful of the powers of French labor unions, there is a pretty low-risk lesson. Go short on France—and be part of the solution to its problems!

1. Table 12a in the Fiscal Monitor illustrates this, as the net present value (NPV) of the change in French pension spending from 2011–2050 is a negative(!) 0.7 percent of GDP, and healthcare spending increases until 2030 a mere 1.5 percent of GDP.

Can the Euro Area Use Its New Stability to Continue Reforms?

Are Europeans Turning Against Austerity?