Prime Minister Shinzo Abe captured the attention of economists, pundits, and global markets with his bold plans to boost growth and inflation in Japan. Stock prices soared, real bond yields plummeted, and the yen dropped sharply. These trends boded well for Abe's success. More recently, markets seem disappointed with the details (or lack thereof) on Abe's structural reforms and the unwillingness of the Bank of Japan (BOJ) to implement its quantitative easing (QE) plans flexibly. In this post I focus on what the BOJ should do to achieve its inflation goal and how that will help reduce the long-run burden of Japan's large national debt.

According to the International Monetary Fund (IMF), net government debt in Japan is already a worrisome 145 percent of GDP and still growing (compared to 90 percent and stable in the United States). It is well known that countries often grow or inflate their way out of large debt burdens. The United States did some of both after World War II. The dollar value of debt grew slower than the dollar value of the US economy for decades, causing debt to shrink by more than half when measured as a percent of GDP. Japan needs to apply a similar economic magic.

I leave it to others to discuss the structural reforms Japan needs to raise its long-run growth rate. I focus on raising inflation to the new target of 2 percent. Many observers argue that higher inflation can have only a small effect on the fiscal position of a country with sophisticated and open financial markets like Japan. Any attempt to raise inflation, they say, will raise the interest rate Japan must pay on new debt issues by an equal amount. The only cost savings will be on the stock of debt that was issued before the rise of inflation, and that is a relatively modest, one-off gain.

But the behavior of bond markets belies this argument. Figure 1 shows that between Abe's election in mid-December (marked by the vertical line) and the middle of last month, the real yield on inflation-indexed bonds fell about 1 percentage point.1 The nominal yield rose less than 0.2 percentage point, implying that expectations of long-run inflation in the bond markets rose more than 1 percentage point. Thus, bond markets expected that Japan would indeed be able to inflate away a significant portion of its debt. Each percentage point decline in the real interest rate on Japan's debt is equivalent to a cut in the fiscal deficit of 1.5 percent of GDP. 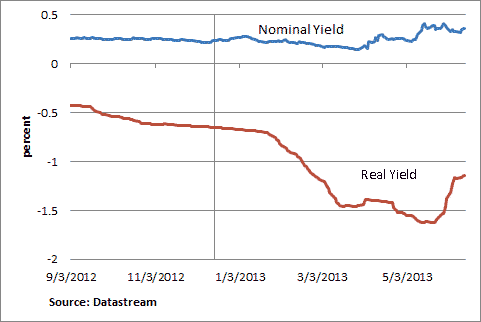 In recent days, some of these moves have been reversed, suggesting that markets are beginning to doubt the BOJ's resolve. Currently, long-term inflation expectations are around 1 percent, well below the 2 percent target.2 However, despite the recent market reversals, inflation expectations remain significantly higher than before Abe's election, as are equity prices, while the yen is lower. This suggests that QE is having an important effect in the intended direction. What more needs to be done?

The BOJ needs to state clearly that it is willing to adjust the size, speed, and composition of QE as needed to achieve its target. Although the BOJ's plan to buy long-term bonds worth around 25 percent of GDP over the next two years is certainly bold, we simply do not know how bold is bold enough. Here are three steps the BOJ could take to increase the effectiveness of its policy: (1) accelerate already planned bond purchases in a flexible manner with an eye toward damping volatility in nominal bond yields; (2) dramatically raise the share of QE devoted toward purchases of equity, which may have larger economic benefits than purchases of bonds; and (3) increase the total volume of QE until inflation expectations in bond markets reach the 2 percent goal.

As the saying goes: in for a penny, in for a pound. The BOJ has staked its credibility on achieving 2 percent inflation within two years. Now is not the time to get cold feet.

1. Yields are based on composites of government bonds with maturities up to 10 years.

2. Expectations are derived from the difference between nominal and real bond yields. This difference is adjusted downward by about one-half of a percentage point to remove the effects of the planned consumption tax increase on future inflation. The consumption tax was legislated last August, well before Abe's election.