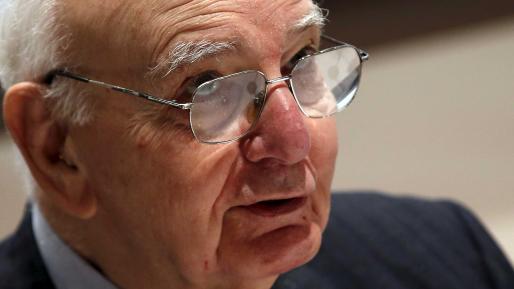 Paul A. Volcker's "Keeping at It:" Messages for Country and World

Why would Paul Volcker, who tamed inflation as chairman of the Fed in the 1980s, write a memoir in his 91st year rather than go fishing? Because he is deeply concerned and has a message about the direction of the country and the world. The message proclaims three verities drawn from his career of service in the public and private sectors: stable prices, sound finance, and good government.

I first met Volcker in the early 1970s when he was undersecretary of the US Treasury and I was a staff economist at the Federal Reserve Board focusing on issues of international monetary reform. When he became chair of the Federal Reserve in 1979, I worked with him on a range of international financial issues. Our most recent collaboration was in 2010–11 on the Palais Royal Initiative of Michel Camdessus, Alexandre Lamfalussy, and Tommaso Padoa-Schioppa, again, on reform of the international monetary system. Volcker is not always right, but he always has something important to say. Readers and nonreaders of his memoir, Keeping at It: The Quest for Sound Money and Good Government, written with Christine Harper, should reflect on what he has to say.

A commitment to stable prices established Volcker’s reputation. In his memoir, he warns against tolerating a little bit of inflation in pursuit of more economic growth in the short run. He distains the false precision of numerical inflation targets. His view is that good economic policy is about more than scientific analysis; it also involves psychology. Volcker agrees with Alan Greenspan, his successor as Fed chair, that price stability is the “state in which expected changes in the general price level do not effectively alter business or household decisions.” (225)[1] The challenge, in his view, is that economists have not recognized the shortcomings of their translation of this definition into a numerical measure. They have not demonstrated to Volcker’s satisfaction, based on the Greenspan-Volcker verbal definition, that the commonly used target of 2 percent by central banks in advanced countries now should be higher. Instead, many economists now argue that a 2 percent target is too low because it limits the scope of monetary policy to counter recessions and risks dangerous deflation.

In their defense, those advocating a higher inflation target such as 4 percent to avoid deflation and maintain the effectiveness of conventional monetary policy might point to the US experience prior to the Great Recession. From 1986, by which time the Volcker-led Federal Reserve had slain the inflation dragon, until 2007, the annual increase in the US personal consumption expenditure (PCE) deflator, the Federal Reserve’s preferred measure of inflation, averaged 3.6 percent with a standard deviation of 1.4 percentage points. If this was a period of price stability on the Greenspan-Volcker definition, then a reasonable measure of price stability might be higher than 2 percent.

In fact, the Federal Open Market Committee (FOMC) debated this issue in the mid-1990s, and many members concluded that the optimal rate of inflation was probably lower but that lower objective was not worth the cost in terms of employment and output. They preferred an opportunistic disinflation policy. However, as personal consumption expenditure (PCE) inflation moved above 5 percent in 1998 and stayed there for the next two years, the FOMC did little about it. In March 1997, the target for the federal funds rate was raised to 5.5 percent. It was subsequently reduced to 4.75 percent in November 1998, before peaking at 6.5 percent in May 1999.

Volcker’s message is that raising the numerical inflation target might be the right policy, but those advocating a higher target appear to be doing so for the wrong reason. They should reflect on whether “a little bit of inflation” might lead to an outbreak of too much.

On deflation, his message is that mild deflation is not price stability, but, on the other hand, in US experience the risk of a deflationary spiral has been limited to periods of a financial system breakdown as in the Great Depression and the Great Recession. This observation leads him to his second verity: the importance of sound finance.

In the Volcker view, sound finance requires effective financial oversight combined with a central bank playing a central role that is independent and dedicated to stable prices. He notes that the structure of the Federal Reserve System is based on political compromise decisions made principally in 1913 and the 1930s. The Fed’s structure may be less than ideal for the United States 85 years later. But it isn’t obviously dysfunctional, and the political authorities today should not attempt to improve it because they might do more harm than good. He expresses satisfaction that at the time of writing, the Federal Reserve “almost uniquely among major federal agencies, hasn’t had its basic organization and functional responsibilities threatened by the Trump administration.” (235) Time will tell if his optimism is justified. Volcker’s message is that the independence of the Federal Reserve is part of our institutional system of checks and balances that should be preserved.

On financial oversight, Volcker favors change. His underlying message is implicit. The Financial Stability Oversight Council (FSOC) created by the Dodd-Frank legislation of 2010 may be effective in theory, but in practice it is likely to prove ineffective, and agency approaches may disintegrate into turf battles and competition in laxity. In the inevitable crisis, the FSOC is likely to fail to achieve its objective. Volcker endorses the proposal in a paper sponsored by the Volcker Alliance, which he founded, that “combines the supervisory functions over the financial system into one entity, the board of which would include representatives of each of the [now] relevant agencies.” (234) He also advocates a major, continuing role for the Federal Reserve in this entity because of “its inherent interest in market stability, its range of regulatory and supervisory responsibilities, and its relative independence from political pressures.” (234)

Volcker’s thoughtful reflections on these two aspects of sound finance and the fact that he combines them are worthy of consideration when the time is right. But given the ongoing pressures and criticisms of governmental processes, the time is not propitious for doing so.

Volcker’s advocacy of a more rational and integrated approach to oversight of the US financial system and respect for the professionalism of the Federal Reserve leads naturally to his third verity—good government. The lack of attention to and respect for good government at all levels is not something new. Citing Alexander Hamilton in the Federalist Papers, Volcker argues that good administration is the key to good government and both are necessary to achieve the effectiveness of good policies. Volcker says that government lacks adequate financial and human resources. He notes that the civilian employment in the federal government is the same as it was in 1962, even though the scope of its assigned duties has increased dramatically. He is implicitly critical of the outsourcing of some critical responsibilities without appropriate oversight and controls. Curiously, Volcker is silent on the importance of fiscal rectitude, a theme about which he has often written and spoken. One suspects that he and his coauthor decided that three verities were enough.

Volcker’s message on good government is that appreciation of effective public administration is necessary for the restoration of trust in government. His message, unfortunately, is no more likely to be answered in the next few years than it has been over the past 30 years since he chaired his first commission on the subject. That fact does not diminish the importance of his message.

The reader might reasonably be depressed that the United States and the world have become unanchored from Volcker’s three verities, especially the third. However, his final message is not to be overly depressed. He closes his memoir with a piece of wisdom from his mother, who died in 1990. When Volcker once expressed his concerns to her about the then-current state of affairs, she reminded him that the United States had already survived a lot over its first 200 years and told him to “get back to work.” In other words, “Keep at it!”

1. Numbers in parentheses are references to pages in the book.