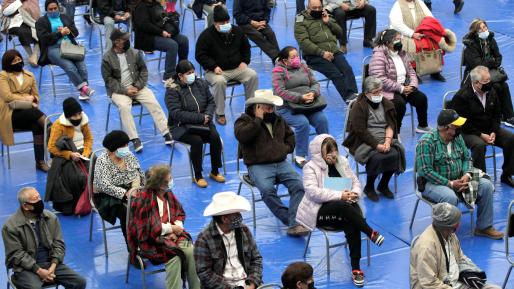 Novel viral variants: Why the world should prepare for chronic pandemics

Even with the alarming spread of variants of SARS-CoV-2, the virus that causes COVID-19 (short for coronavirus disease 2019), most economists, most policymakers, and perhaps most people have been assuming that at some point the pandemic will end, and life will resume as before. But what if it does not? Experience with HIV/AIDS and other precedents indicates that these disease events can turn from acute to chronic without going away. The reason lies in the extraordinary mix of virus characteristics, medical science, an interdependent global population, ease of global travel, social behavior, and political missteps and miscalculations—a mix that also caused SARS-CoV-2 to spread so quickly in our globalized era.

COVID-19 is only the latest example of an unexpected, novel, and devastating pandemic disease. Down the road, new threats will surely emerge. One can conclude from the world's ongoing experience that we have entered a pandemic era. To prepare for the pandemic age, world leaders must cooperate to invest more in research in infectious diseases, as well as vaccine development; create and coordinate genomic surveillance efforts; and set up robust public health infrastructures.

Viruses and the diseases that they cause cannot be directly compared. Although nonexperts generally tend to do that, viruses differ greatly in transmissibility, the severity of disease they cause (also known as pathogenicity), the way they may attack or evade our immune responses, as well as many other factors.

SARS-CoV-2 (or severe acute respiratory syndrome coronavirus 2) is similar to SARS-CoV, which caused the SARS epidemic of 2002-03. That earlier epidemic was never classified as a pandemic because it did not spread widely from the places of temperate climate where it originated.1 Though highly pathogenic—killing 10 percent of those infected—it was contained because countries affected by it, mainly China and other East Asian countries, took intense mitigation measures such as lockdowns and other steps to stop chains of transmission. It was also not very contagious compared with other respiratory viruses like those that cause the flu. Similarly, the virus that causes Middle Eastern respiratory syndrome (MERS), MERS-CoV, was also contained by intense mitigation measures aided by its low levels of contagiousness, despite its high level of lethality. Like SARS-CoV-2, SARS-CoV and MERS-CoV are coronaviruses.

Every new pathogen can raise unique challenges. The human immunodeficiency virus (HIV), the pathogen responsible for acquired immunodeficiency syndrome (AIDS), is not a coronavirus, and the disease that it causes is very different. It is a virus that mutates much more rapidly than the three coronaviruses listed above, but since it transmits via bodily fluids, it is less contagious than respiratory viruses. The literature on why AIDS became a pandemic—a disease that spread to many countries and affected millions of people—is vast.

Like HIV, MERS-CoV, and SARS-CoV, SARS-CoV-2 is zoonotic—i.e., capable of jumping from one animal species to another, eventually reaching the human population. For decades, virologists and epidemiologists have been warning that a global pandemic would hit because of the existence and abundance of zoonotic viruses, increasing human encroachment on animal habitats, and the speed and ease with which germs travel when people travel. Their prophecy was fulfilled when SARS-CoV-2 was first detected in Wuhan, China, at the end of 2019, spreading within days or weeks to other parts of China and then the globe. Unlike SARS-CoV in 2002-03, the spread of SARS-CoV-2 globally was not contained fast enough in 2019-20, and in the current environment, we cannot rely on rapid containment in the future.

In this regard, the AIDS pandemic illustrates an important point: social and political factors that impede a quick response and the difficulty of finding a vaccine quickly. HIV, which if left untreated leads to AIDS, mutates very quickly, rendering vaccines difficult to develop. Indeed, an HIV vaccine still does not exist. Moreover, in the early stages, AIDS also stigmatized those afflicted, delaying political responses and the deployment of funding for research into potential treatments. SARS-CoV-2 is very different from HIV, but as with HIV, social, economic, and political factors came together with the virus's high transmissibility to drive the COVID-19 pandemic.

Global experience clearly shows that countries that moved quickly to isolate cases of infected individuals, lock down communities and certain regions, and invest heavily in contact tracing were able to control the virus reasonably well. That has been the case in Japan, New Zealand, and Australia. Island countries aside, South Korea, Thailand, and Vietnam were also very successful. European countries that adopted lockdowns often moved too late, hampering their efforts to stem the tide. With the exception of Uruguay and Costa Rica in Latin America, two countries that quickly adopted lockdowns and contact tracing, as well as widespread mask wearing and adherence to social restrictions, the rest of the region has fared poorly. The experience in India has been mixed, as in African countries, which, in addition, fared relatively better due to demographics, namely younger populations.

Why variants of SARS-CoV-2 are of mounting concern

Figuring out the exact nature of SARS-CoV-2, and what it portends for future epidemics and pandemics, poses a significant challenge. What little we know is worrisome. First, it may never be known what animal species this virus came from—whether a bat or some other species that transmitted the virus zoonotically to humans in Wuhan. A safe assumption is that zoonotic viruses will inevitably recur, given the nature of the global economy and population shifts.

Another concern is that it is unknown how lethal and transmissible future viruses will be. Only a few months ago, scientists and public health officials generally assumed that SARS-CoV-2 seemed to mutate slowly, more slowly than the viruses associated with the flu, or even HIV. The resulting complacency has now been replaced by alarm among some specialists, just as vaccines are starting to roll out. With uncontrolled epidemics continuing in different parts of the globe, the virus has started to undergo what doctors call selective pressure. Selective pressure occurs when a virus that is spreading and replicating widely in a population develops mutations advantageous to making it more transmissible and/or better able to escape our natural immune responses. Often, these mutations may lead to similar features arising independently of each other in different locations, a phenomenon known as convergent evolution.

At the end of 2020, novel variants of SARS-CoV-2 with concerning mutations arose independently in the United Kingdom, South Africa, and Brazil. These so-called variants of concern (VOCs) share a number of characteristics that may make them more transmissible or likely to evade a person's prior immunity. They may also be associated with increased disease severity. The independent emergence of these VOCs at around the same time strongly suggests that convergent evolution of SARS-CoV-2 is taking place as viral spread continues unabated in many different countries. The VOC that emerged in the United Kingdom—the most widely studied to date—has been associated with higher transmissibility, greater viral loads in infected individuals, and possibly also with immune evasion. Higher transmissibility and viral loads may place health systems under severe pressure. In response, many European countries where the UK VOC was identified renewed strict lockdowns in late 2020 and early 2021 even though these countries had already begun their immunization campaigns.

The UK VOC has been identified in 72 countries including the United States. The South African and Brazilian VOCs have not yet spread as widely, but there is mounting concern within the scientific community that they may be more dangerous. It is entirely possible that many other unknown VOCs are circulating in different parts of the world right now—unknown because countries in general have ignored the need for well-structured genomic surveillance systems. The slow development of surveillance capacity was not of much concern when the prevalent view was that SARS-CoV-2 was a slowly mutating virus. VOCs have now shattered that view.

A first priority now is to build up genomic surveillance—the ability to genetically sequence a very large number of viral samples in the population in order to identify concerning mutations and thus take action before viruses with those mutations become a threat to the community. Genomic surveillance involves substantial domestic coordination and resources, as exemplified by the COVID-19 Genomic UK Consortium, a network of UK public health agencies and academic institutions created in April 2020 to collect, sequence, and analyze genomes of SARS-CoV-2 as part of the COVID-19 pandemic response. The network is currently the best system in the world collecting information on the various viral variants circulating both in the United Kingdom, as well as in other countries. It is also the only network doing this type of work systematically.

Genomic surveillance systems in the United States and other parts of the globe lack the geographical coverage to trace and monitor where VOCs might be circulating within the country, a crucial piece of information for epidemiological control. No global coordination on genomic surveillance efforts exists either, despite an appeal by the scientific community to create one.

Viruses cannot be eradicated at home while they rage elsewhere

The uncertainties stemming from the mutating of SARS-CoV-2 mean that policymakers must absorb the lesson that unless the virus is controlled everywhere, it cannot be under control anywhere. To paraphrase Benjamin Franklin, we must all hang together, or the virus will hang us all separately. Disparate vaccination campaigns across the globe and the absence of sufficient doses in many countries will inevitably provide greater opportunities for selective viral pressure and the emergence of other novel VOCs that may be potentially vaccine-resistant. Current vaccines themselves provide the opportunity to learn more, as they all protect against suffering hospitalization or death from the disease, but some vaccinated people experience lesser symptoms and may still be able to infect others. As long as the virus continues to have ample opportunities to replicate, selective pressure and convergent evolution will keep the world in a chronic state of alarm.

In other words, even as caseloads and death tolls subside due to vaccines and public health measures, the world may well transition from an acute to a chronic pandemic. Policymakers everywhere should focus on preparing for a chronic pandemic now rather than wasting valuable time speculating over its unknowable end point. Those preparations can also help in containing future outbreaks of new diseases. A key measure in all these efforts will be a much more effective global framework for fighting deadly contagious diseases wherever they occur.

1. According to the World Health Organization (WHO), a pandemic is defined as "an epidemic occurring worldwide, or over a very wide area, crossing international boundaries and usually affecting a large number of people." An outbreak is called an epidemic when there is a sudden increase in cases in some region of the world, or in a particular country. The WHO further notes that this traditional definition of a pandemic has nothing to say about demographics and potential existing levels of population immunity, the nature of the infectious agent, or the pathogen that causes disease, or even the severity of disease caused by the pathogen. Following the WHO's definition, pandemics can be said to occur annually in each of the temperate southern and northern hemispheres, given that seasonal epidemics, like the flu, cross international boundaries and affect a large number of people. However, seasonal epidemics are not typically considered pandemics.