Though US lawmakers are divided over just about everything, Congress appears ready to approve pending bills to support research, development, and production of a new generation of semiconductors with bipartisan majorities. Separate measures in the House and Senate[1] respond partly to supply chain shortages, now holding up automobile production and much else, and partly to fears of Chinese dominance in a high-tech industry.

These measures, along with other bills in the legislative hopper, mark a comeback of US industrial policy—government support to nurture favored economic sectors. The track record of such efforts has achieved mixed success at best. While import protection of aging industries seldom pays off, R&D subsidies have sometimes achieved their goals. But jobs created or saved by industrial policy often entail high costs, while targeting a single firm to carry the mission seldom succeeds. On the other hand, industrial policy can attract world-class foreign firms to invest in the United States.

In a PIIE Briefing, Scoring 50 Years of US Industrial Policy, 1970–2020, we assess 18 high-profile cases that sought varied objectives over the past 50 years (see table). The Briefing seeks to examine whether a subsidized industry became competitive globally, whether it created jobs at reasonable cost to taxpayers and consumers, and whether technology was advanced through government assistance. 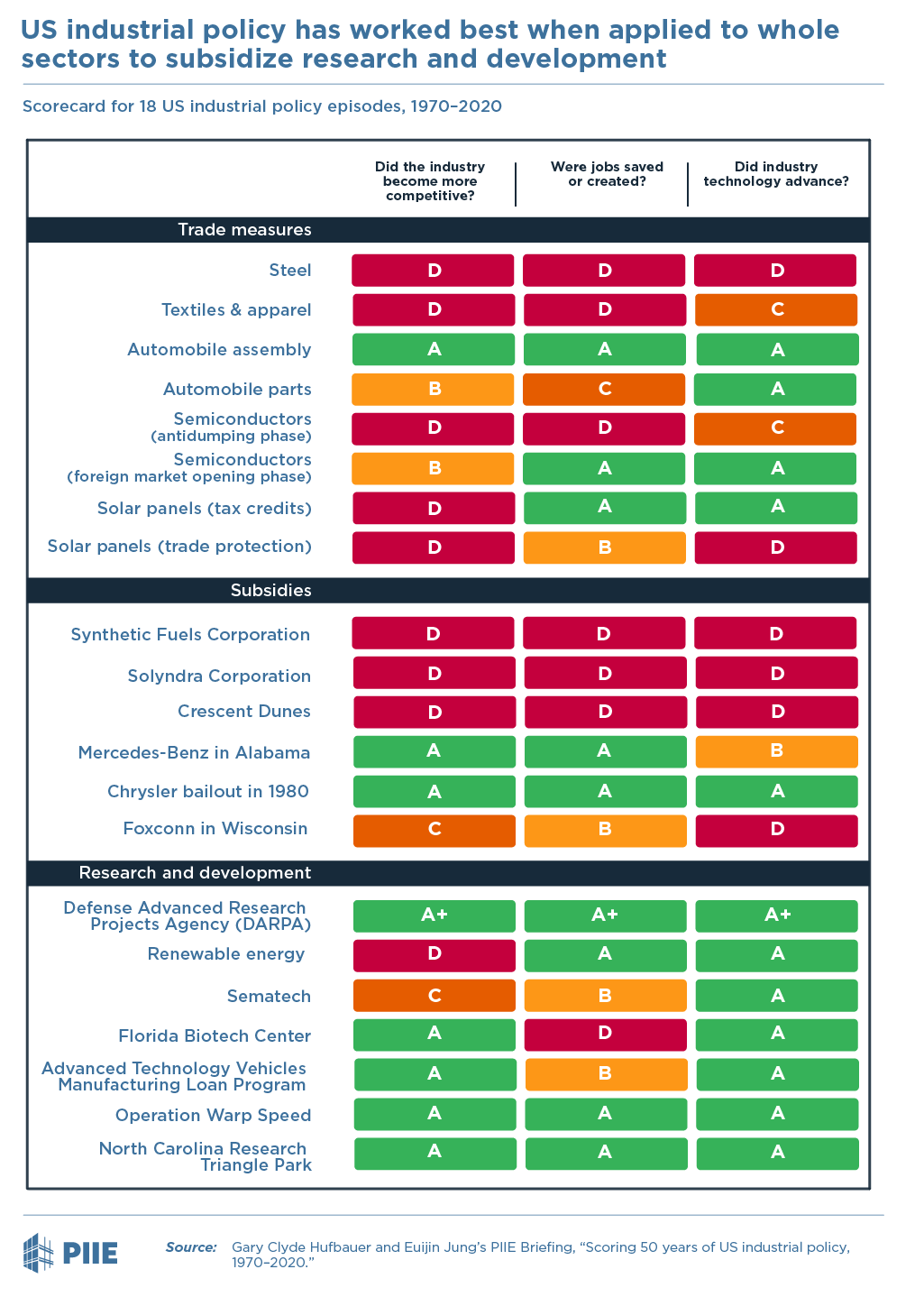 The mixed record includes the success of the Defense Advanced Research Projects Agency (DARPA), which advanced military technology and paved the way in the decades since 1990 for the internet and the technology giants of today, including Facebook, Amazon, Apple, Netflix, and Google. President Joseph R. Biden Jr. has proposed other projects—ARPA-Health and ARPA-Climate—fashioned after DARPA. Another success was the North Carolina Research Triangle Park, launched in the 1960s, which attracted thousands of technology companies to a once-rural area over the next 60 years. Among the failures were efforts to protect the US steel industry and support the energy firm Solyndra Corporation's venture into solar cells.

Another R&D industrial policy venture, Sematech (SEmicondutor MAnufacturing TECHnology), a public-private consortium, was at best moderately successful between 1987 and 1997, when it reduced the R&D cost required for the next generation of chip miniaturization and shortened the cycle to two years. Eventually, many leading US firms relocated their fabrication plants abroad.

Solyndra Corporation proved to be an outstanding failure. Its invention of copper indium gallium selenide (CIGS) thin film was no match for polysilicon film. Despite a federal loan guarantee, Solyndra filed for bankruptcy in September 2011. It failed to advance solar technology and instead was overtaken by other advances.

States also undertake industrial policy. Tax breaks and subsidies persuaded Mercedes-Benz to locate an assembly plant in Vance, Alabama in the 1990s. The company increased its US market share to 2 percent by 2019. Wisconsin's state support for Foxconn likewise promises moderate success in terms of creating local jobs at a reasonable cost.

The outcome of five episodes that involved trade measures to support US industries such as steel, textiles and apparel, automobiles, semiconductors, and solar panels are mixed. Protection for steel, textiles and apparel, semiconductors (antidumping duties phase), and solar panels did not create US industries that could meet foreign competition. Nor did they advance the technological frontier much. Consumer costs per job saved were spectacularly high for steel, textiles, and apparel. The lesson is that import protection seldom pays off. It imposes high costs on downstream industries, makes few contributions to technological progress, and usually fails to turn US firms into export powerhouses. A big exception occurs when threatened barriers prompt a world-class firm like Toyota or Taiwan Semiconductor Manufacturing Corporation (TSMC) to open plants in the United States.

R&D subsidies work best when they encourage a competitive approach and defer to broad guidance by science and engineering experts who, without political interference, award grants or otherwise encourage promising but high-risk R&D. Florida's Biotech Center and the North Carolina Research Triangle both attest to this industrial policy model. Fortunately, bills now under congressional consideration appear to contemplate a competitive approach to public largesse, administered through either tax credits or government grants.

On the other hand, jobs created in one state are costly to taxpayers and often come at the expense of comparable jobs that might have been created in another state. Far better policies are available for creating jobs on a national level—for example, on-the-job training and earned income tax credits.

Finally, policymakers should be wary of designating a single firm to advance technology. We did not find any subsidized single-firm triumphs. The Advanced Technology Vehicles Manufacturing (ATVM) program shows that it is much better to fund multiple firms at the outset. The highly successful model of Operation Warp Speed to create COVID-19 vaccines vividly demonstrates that competition is an American strength.

1. The US Innovation and Competition Act, which was passed by the US Senate on June 8, 2021, includes the CHIPS Act, which would subsidize US semiconductor production at $52 billion over five years. The Facilitating American-Built Semiconductors (FABS) Act, which is before the House, would grant a 25 percent investment tax credit for chips plant construction in the United States.