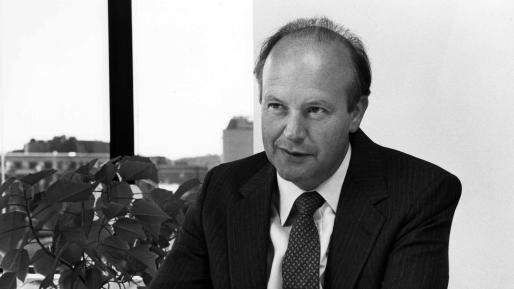 We invite you to experience the memorial service held for John Williamson on November 7, 2021.

The Peterson Institute for International Economics mourns the passing of John Williamson, a renowned international economist, and a founding senior fellow at the Institute, who died April 11 at his home in Chevy Chase, MD, at the age of 83. Williamson's pioneering work on development economics, exchange rate regimes, international monetary reform, and many other subjects influenced the entire field of international economics. He was a prolific author and treasured mentor to many generations of scholars and policymakers, especially during his 32 years at PIIE.

John's career included service at the UK Treasury, the International Monetary Fund (IMF), the World Bank, the University of Warwick (UK), the University of York (UK), Pontifícia Universidade Católica do Rio de Janeiro (Brazil), the Massachusetts Institute of Technology, and Princeton University. Beyond his career, he was a legendary and lifelong birdwatcher and conservationist, who observed and recorded more than four thousand species of birds throughout the world. His scholarship and policy leadership were matched by his unflinching integrity, infused with wit, kindness, and humility. The Peterson Institute is profoundly grateful for the many condolences it has received.

Following are some of the tributes we have collected:

Adam S. Posen, president of PIIE
Dr. Williamson was one of the founding titans of the Institute, with Fred Bergsten and Bill Cline. He set the model for our kind of applied scholarship, and he demonstrated the impact on policy that we could aspire to having. John's legacy goes far beyond just the Washington Consensus or his work on exchange rate regimes, though either contribution alone would be enduring.

C. Fred Bergsten, director emeritus of PIIE
John Williamson was one of the finest international economists of his generation. He was enormously creative, inventing ideas ranging from crawling pegs and target zones for currencies to the Washington Consensus for economic development—all of which had very direct impact on real world policies. His breadth of interests was extraordinary, encompassing everything from the international monetary system through debt relief for the third world to development economics and policy reform in Eastern Europe after the fall of communism. Some of his best work, like Financial Intermediation Beyond the Debt Crisis (1985) and The Political Economy of Policy Reform (1994), was relatively unsung but nevertheless extremely insightful and influential.

John was my very first hire when I created the Institute for International Economics in 1981, and he indeed joined the Institute before it formally existed. Our very first publication, John's proposals for reform of the IMF, attracted widespread attention (including from the US Treasury) and helped bring early prominence to the Institute. He was an invaluable and beloved colleague for over 30 years, and we were delighted to hold a conference and publish a festschrift in his honor when he retired in 2012. John epitomized globalization, growing up in the United Kingdom and living in his adopted home in Brazil before spending the second half of his life in the United States.

John was a dear friend as well as a coauthor, a close partner in creating and developing the Institute, a generous contributor to our Institute family, and a mentor to a full generation of international economists. He will be sorely missed.

Paul Krugman, Nobel Prize winner and opinion columnist for the New York Times, via Twitter
[John Williamson was a] lovely person and a major contributor to international economics—[who] among other things coined the term "Washington Consensus.” Williamson also devised the "crawling peg" exchange rate system, which helped developing countries escape from repeated balance of payments crises. And I've long been indebted to him for the phrase "the doctrine of immaculate transfer," for claims that capital movements can somehow take place without changes in real exchange rates to induce the corresponding trade imbalances.

Stanley Fischer, former vice chair of the US Federal Reserve Board and member of the board of PIIE
Everyone who has had to think about economic development, or open economies and exchange rates, or the (sometimes divergent) economic policies advocated by the “Nineteenth Street twins”—the International Monetary Fund and World Bank—is indebted to John Williamson. …[E]veryone who has ever had to deal with the practical aspects of economic growth and development—especially with exchange rate issues—owes John Williamson a debt of gratitude, mostly for the content of what he has written but also for the calm, clear, and nonhistrionic style in which he writes.

His approach to economics is deceptively simple. He believes in economics, and he believes in applying it. As his replies to the critics of the Washington Consensus show, he stands his ground when challenged, for he has a firm and well-based belief in the benefits of a market economy. He does not try to impress by using fancy technique; rather he tries to be useful. …Williamson believes in serious discussion and civilized dialogue as ways to advance understanding—and this is no small thing in a profession as important as ours.

1. The predecessor of the Peterson Institute for International Economics.

After the Washington Consensus: Latin American Growth and Sustainable Development