Japan's 'Third Arrow': Why Joining the TPP is a Game Changer

Prime Minister Shinzo Abe's announcement on March 15 that Japan will seek membership in the Trans-Pacific Partnership (TPP) brings the negotiations a step closer to a large, 12-member trade agreement connecting countries that account for 38 percent of world GDP. To be sure, much work lies ahead before Japan fully participates: bilateral discussions with TPP partners, a 90-day wait to mimic the expired US fast-track legislation, and of course building Japanese political support.

The expansion of the TPP is a remarkable example of what C. Fred Bergsten, director emeritus of the Peterson Institute for International Economics, has described as "competitive liberalization." Starting with a four-country agreement among Brunei, Chile, New Zealand, and Singapore—intended as a seed for a high-quality Asia-Pacific-wide enterprise—the negotiations have grown to eight, nine, eleven and now apparently 12 countries. This process is not over yet: with Japan in, Korea may join, and the case for doing so will become stronger also for the Philippines, Thailand, and Indonesia. In the long run, it may even provide a pathway to a free trade area among all economies of the Asia Pacific Economic Cooperation (APEC) forum.

Competitive liberalization not only explains the growth of the TPP, but may have also stimulated the launch of the Regional Comprehensive Economic Partnership (RCEP) negotiations among 16 Asian countries, and the Trans-Atlantic Trade and Investment Partnership (TTIP) negotiations between the United States and the European Union. These three mega-negotiations are a new game in trade policy. They could signal the gradual consolidation of trade accords after a two-decade run of small bilateral agreements.

Japan has good reasons to join. It is the fourth largest exporter in the world, but its trade policy has fallen behind those of its competitors. For example, Korea established a "roadmap" for free trade in 2003 and has now completed agreements with the European Union, the United States, and many Asian neighbors. Korea is also well along in negotiations with China.

Trade policy could also emerge as a centerpiece of a new Japanese growth policy, the "third arrow," alongside monetary easing and fiscal stimulus, of Prime Minister Abe's revitalization strategy. It could build confidence among investors and consumers and drive widespread productivity gains, including especially in Japan's sclerotic service sector. It would not require much government spending and would reinforce Japan's geopolitical ties with the United States and Southeast Asia.

Prime Minister Abe's government is the third in the last two years to wrestle with the TPP decision. Other governments came close to making a commitment, but backed off under political pressure, particularly from the powerful agriculture sector. In last December's elections, the victorious Liberal Democratic Party (LDP) managed to keep its options open and now, standing tall in the polls, it has decided to act. This direction has been long supported by Japanese business, academic, and political leaders and, judging by recent polls, now also the majority of the Japanese people.

Tables 1 and 2 provide estimates from our model of Asia-Pacific trade (Petri, Plummer, and Zhai 2012) for a TPP agreement based on the 11 countries now negotiating, and for a 12-country TPP that includes Japan. These show that adding Japan would increase total income gains generated by the agreement by $149 billion per year in 2025. (Our website, www.asiapacifictrade.org, provides additional detail.) 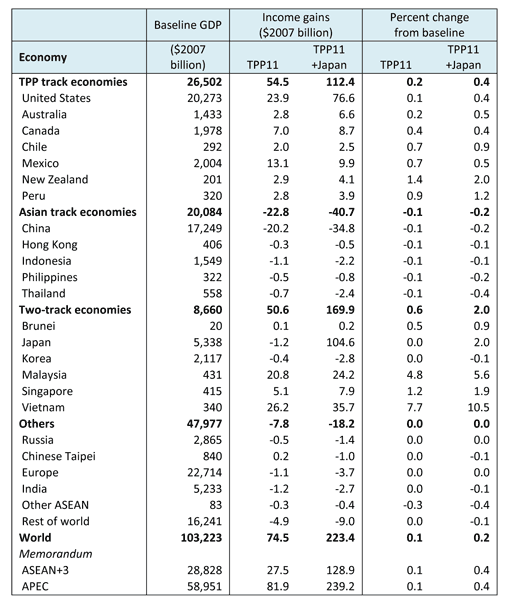 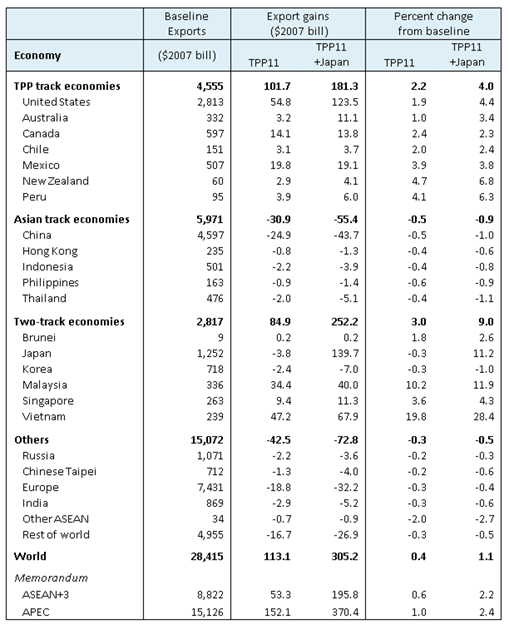 The greatest benefits would go to Japan, with incomes rising by $106 billion or 2 percent of GDP, and exports rising by 12 percent. These large gains would reflect important features of the TPP, including lower non-tariff and investment barriers in Japan and elsewhere. These should lead to new foreign investment in Japan, greater exports of sophisticated manufactured products, and improvements in service sector productivity.

Other TPP countries would also benefit. The United States would gain $53 billion from Japan's inclusion since it does not yet have a free trade agreement with Japan. The 10 other TPP countries would see incomes rise by $16 billion, with relatively large gains in Australia, New Zealand, and Vietnam. The one TPP country that would be adversely affected is Mexico, since it already has an FTA (free trade agreement) with Japan, and thus Japanese membership would result in eroding its existing preferences in both Japanese and North American markets.

We also estimate that trade diversion losses for China would increase by $15 billion, because of Japan's improved competitiveness in TPP markets. To be sure, these losses would not be large relative to Chinese GDP. Still, they strengthen the argument for a "third track" of cooperation between the United States and China—as two of us proposed elsewhere (Petri and Plummer 2012)—to offset the short-term negative effects of competition between the TPP and RCEP.

Meanwhile, the political opposition to the TPP in Japan remains vocal. First, agriculture lobbies are opposed to trade liberalization, as they have been for many decades. Yet studies by the Organization for Economic Cooperation and Development (OECD) and others show that current agricultural policies prevent specialization in new areas of farming and discourage the entry of younger farmers. We guess that Japan will keep some of its most sensitive barriers, and estimate mild, gradual declines for agriculture under the TPP. These would be surely compatible with compensation arrangements that benefit everyone.

Second, many fear the "hollowing out" of Japanese manufacturing. Services have been taking up a greater share of the Japanese economy over time. Yet trade plays a minor role in this process. Japan's aging population, changing consumption patterns, and rising productivity in manufacturing are far more important. We project some negative effects for the least productive apparel, footwear, and electronics firms (especially under RCEP due to Asian competition) but, also positive effects for manufacturing as a whole. The TPP would shift, rather than shrink, Japanese manufacturing.

Third, some believe that the TPP would require privatizing the Japanese health care system along the lines of the US model. This is simply implausible. The TPP may require that advanced medicines be given more transparent consideration in drug selection and that some medical insurance markets be opened to competition, but it will not require changing Japan's national health care system. And the same intellectual-property-related disciplines would protect Japan's increasingly competitive pharmaceutical companies in their business abroad.

Finally, some argue that Japan would gain more from joining the Asian RCEP agreement than the TPP. Our estimates suggest the opposite (relative to the baseline, $105 billion gains from the TPP vs. $96 billion from RCEP), but the main point is that nothing prevents Japan from doing both. A "two track" strategy would generate by far the largest income gains, around 4 percent of GDP. That option will also support the consolidation of regional agreements in the future.

Japan reached the TPP decision in the nick of time. With 16 rounds of negotiations completed, the negotiators are focusing on the endgame in 2013. Japan may still influence key provisions. And at home, its membership will be an important addition to the Abe administration's game plan for revitalizing the Japanese economy.

The Trans-Pacific Partnership and Japan