Greece Has Chosen, but It Doesn't Get to Decide by Itself

The radical leftist party Syriza won the election in Greece on Sunday with 36 percent of the vote, propelled by a campaign demanding an end to tough austerity measures imposed from on high in return for its rescue from insolvency. Together with the Independent Greeks party (ANEL), Syriza is now poised to form a Greek government, opening a new chapter in the contentious modern history of the euro area.

Syriza's call for a new agreement with the euro area is not entirely far-fetched. The new Greek government faces pressure, however, to drop demands for immediate debt relief. It must also show that it can present a credible alternative economic plan for Greece. Some scope for negotiations about the details of the short-term fiscal stance and some of the structural reform requirements also seem possible.

If the new government has new suggestions for collecting government revenues, for instance, euro area governments would welcome them. But the most likely result is that Syriza will have to drop many of its electoral campaign demands. The euro area is not likely to accept an increase in the Greek minimum wage, as advocated by Syriza, or an elimination of the Greek primary surplus, or a broad rollback of the Greek privatization program, as part of any renegotiations with the Troika, consisting of the European Commission, the European Central Bank (ECB), and the International Monetary Fund (IMF). And certainly the euro area will resist talk of future additional debt relief until after the current Troika program has largely been implemented.

One reason why Syriza will feel pressure to compromise is that its supposed landslide victory and decisive break from the past were not as clear-cut as many commentators are saying. A closer examination of the electoral result in June 2012 and last week shows that the election reshuffled voting blocs rather than brought about a dramatic change in electoral sentiments. 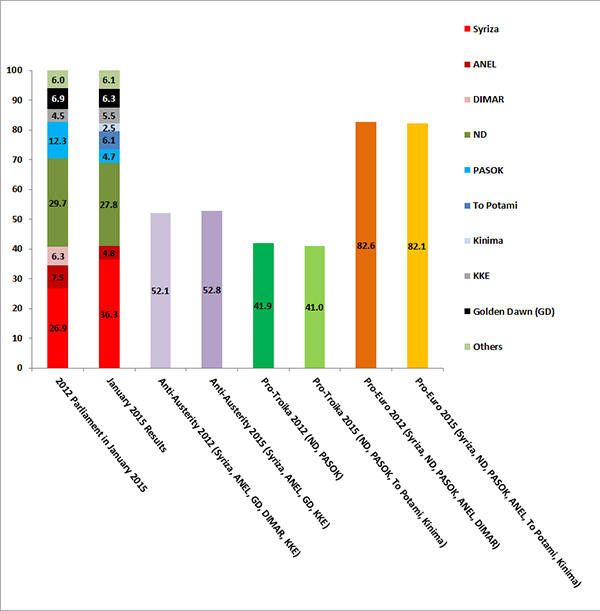 Source: Greece Ministry of the Interior.

Figure 1 shows, for example, that Syriza's 36.3 percent represented an increase by 9.4 percentage points of its share in the last election. But it managed to do so largely by absorbing the votes from the two splinter movements—Independent Greeks, or ANEL1, and Democratic Left, or DIMAR2—which broke from the coalition that has effectively ruled Greece since late 2011. (ANEL joined Syriza this time, but its vote fell by 2.7 percentage points since June 2012, and DIMAR's previous 6.3 percentage point showing in 2012 melted away.3)

Meanwhile the combined 11 percent vote was unchanged for two hardcore rejectionist parties, the Communist KKE and neo-nazi Golden Dawn. The vote of the incumbent New Democracy (ND) declined only marginally, falling by less than 2 percentage points to 27.8 percent. Its socialist coalition partner PASOK suffered more. It fell nearly 8 percentage points to just 4.8 percent. Two new centrist parties, To Potami and Kinima4—both of which supported a new accommodation with the Troika—got just over 8 percent combined.

The striking conclusion based on these numbers is that, contrary to public perceptions, overall electoral support for the "anti-austerity platform" in Greece was largely unchanged at 52 to 53 percent in terms of how the parliament elected in 2012 voted at the end of its tenure, and the 2015 election results. The "pro-Troika parties" were supported by 41 to 42 percent, also unchanged. Because KKE and Golden Dawn are the only parties that support the exit of Greece from the euro, the election showed an overwhelming majority of Greek voters continuing to support euro membership.

Alexis Tsipras, the Syriza leader, therefore failed to win over scores of new votes in this election. DIMAR and ANEL support had already shifted away from the incumbent government. He is not an electoral juggernaut but rather a new political leader who successfully managed to consolidate the already declared political support for an anti-Troika program electoral platform within his own Syriza party.

Tsipras does benefit from Greece's electoral law requiring 3 percent of the vote to be included in parliament, eliminating at least one splinter party. He also gets a bonus of 50 parliamentary members as the party with the largest vote. Thus a relatively minor swing in the Greek electorate in a future election could tip the scales away for him, or at least force Syriza to seek more coalition partners among the smaller centrist parties in the future.

All these numbers add up to an important conclusion: The Greek electorate is relatively stable, and the Troika, not to mention other euro area members, should not be afraid of standing up to the new Athens coalition out of fear of another election later this year. It is far from obvious that Syriza and its allies will do better by going to the voters again. Indeed, if future elections were to take place under circumstances of renewed acute economic stress, the opposite might well be the outcome.

Tsipras's choice of ANEL as a coalition partner, moreover, is not encouraging for the coalition's stability. ANEL belongs on the right-wing side of the political spectrum, sharing few basic economic policies with Syriza. The two parties seem united mostly in what they oppose, namely the current Troika program of budget cuts and structural reform. ANEL's leader, Panos Kammenos, has employed high-pitched rhetoric to denounce "German neo-nazis," whom he says are in charge of European policies. Such rhetoric does not bode well for negotiations with the euro area. The composition of the new Greek government coalition makes it implausible that the two parties can quickly forge agreement on an alternative economic program for Greece to be negotiated with the euro area.

Although Tsipras's oratory has been confrontational, it would be hubris and probably futile for him and his government to confront the European leadership. For one thing, the political and economic timetable in 2015 is not in Syriza's favor. Last week the ECB left Greek bonds out of the list of securities to be included in its new quantitative easing (QE) bond purchasing program, a signal to Athens that its review of Greece's economic and structural reforms must still be completed. This means that the rest of the euro area gets the financial benefits of ECB QE purchases while Greece does not. As a result, importantly, any financial contagion from economic turmoil in Athens will not likely spread beyond Greece. Unlike its stance in 2012, when fear of contagion was rampant, the euro area can sit tight and wait for Greece to acquiesce to a deal, while Greece comes under pressure to compromise.

The euro group can play for time. If required, it seems likely to grant Greece another limited extension of the current Troika program review beyond the current end-February 2015 deadline. A potential additional extension of 2 to 3 months seems plausible to enable the coalition government to negotiate its own position and for the euro area to appear to respect the election result in Greece.

A hard deadline for any new agreement between Greece and the euro area seems likely to be late June 2015. It is then that a number of Greek bonds held by the ECB and euro area countries reach maturity and must be repaid. The ECB is legally prevented from rolling over any Greek debt (this would be against the EU Treaty), and in the absence of any new deal the Greek government is not likely to have the cash available to pay. A failure to meet its debt obligation would amount to a default against the ECB and/or the euro area, which would result in the immediate loss of access of Greek banks to ECB liquidity. The euro group thus has no reason to extend the current program review beyond April or May. An agreement between the Athens government and the euro area will have to be reached by this time to stave off a major deterioration of the economic situation in Greece.

This late June deadline makes for uncertain political fallout from this election in other euro area countries.

The next euro area elections are in Estonia in March and Finland in April. The voters there will likely reject any debt relief to Greece as resoundingly as Greeks have voted for it. These choices should be seen as no less legitimate than the result in Greece.

Portugal goes to the polls in September/October and Spain no later than December 2015, only months after a solution to the Greek situation has to be reached to avoid a dramatic economic deterioration in that country. A possible new agreement could signal that even a non-mainstream party in power does not translate into a major departure from the current policy status quo. If an agreement is not reached, a new economic crisis in Greece would strengthen the incumbent governments in Lisbon and Madrid. Either way, there is no reason to believe the political spin that the Greek elections portend a rejection of reform in other parts of the euro area.

1. ANEL was founded in early 2012, following the ejection of Panos Kammenos from New Democracy (ND) after he voted against Lucas Papademos in a vote of confidence.

3. DIMAR entered into an alliance in 2015 with the Greek Green Party, but the joint electoral list received a mere 0.49 percent of the vote.

4. Kinima however failed to clear the 3 percent threshold for entry into parliament.