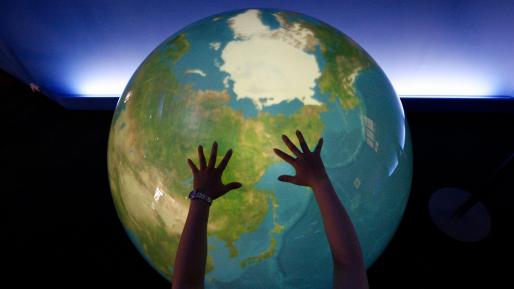 The author is grateful to Michael Zhang for research assistance. Graphic produced and designed by Nia Kitchin and Oliver Ward.

Globalization's many critics frequently assert that the dramatic growth of cross-border trade and investment has forced countries to undercut each other in wages and labor standards—a so-called race to the bottom for rich and poor nations alike.

A more accurate description would be that it has been a race to the top. Almost every country is richer today, some substantially so, than three or four decades ago when the globalization era gained steam.

Visualizing the world economy since 1980

The interactive graphic below illustrates how the world economy has evolved over the past 40 years (1980 to 2019). Countries are ranked in terms of real per capita GDP on the vertical axis and their share of the world's population on the horizontal axis. (The data are based on the Penn World Tables 10.0.)

In 1980, before globalization really took off, there was a cluster of rich, advanced economies, led by the United States and followed by Western Europe and Japan. Then came middle-income countries, many of which were in Asia and Latin America, followed by a long sequence of very poor countries, some highly populated—notably India and China.

The 1990s marked the era of the Washington Consensus, a period of liberalized trade and investment rules and a shift toward more market-oriented economic policy. The collapse of communism and onset of reforms in the developing world—including in China and India, which opened their previously closed economies—helped integrate countries into a truly global economy. The flow of trade, investment, and technology across countries increased considerably, and the term "globalization" sprang into use.

As economic exchange between countries expanded, what happened to the distribution of world income? Some expected a race to the bottom in which the distribution of world income would flatten, as poor nations got richer at the expense of advanced economies. Some in poor countries saw expanding global trade as a new form of colonialism in which high-income countries would become even richer at their expense, exacerbating global inequality.

Neither scenario came true. Instead, the world distribution of income shifted up. The United States and Western Europe were richer in 2000 than they had been in 1980, middle-income countries mostly grew but at a lower rate (the lost decade in Latin America due to the debt crisis), while China was able to inch upward after Deng Xiaoping, China's leader from 1978 to 1992, began opening up the Chinese economy.

Fast forward another two decades to 2019 and the effects of intensified globalization become clear. The entire distribution of world income shifted up further (see 2019 data in graphic). Now the middle-income countries enjoyed higher incomes than they did during the 1980s and 1990s. The bottom end of the distribution also did much better, as both China and India and others in Africa and Asia made great strides in raising their incomes and reducing poverty.

Why has globalization led to an upward shift in world income?

By increasing investment and facilitating the diffusion of technology, more open economies are able to increase productivity, which enables faster growth in per capita GDP. The increasing productivity of domestic workers raises output per worker, thereby improving living standards. In this sense, countries are not competing with each other but simply trying to improve their own lot by themselves.[1]

Globalization deserves some credit for enabling once desperately poor countries to grow more rapidly and thereby reduce poverty. World poverty has declined significantly over the past 40 years. According to the World Bank, the share of the world's population in extreme poverty has fallen from 42 percent in 1981 to just 8.6 percent in 2018.[2] This tremendous advance has not come at the expense of richer countries in North America and Western Europe. (It remains to be seen how much the COVID-19 pandemic may have reversed this progress, however.)

The past 40 years have also seen reduced global inequality. Unlike previous periods of economic divergence, developing economies began to converge with richer countries starting in the mid-1990s. Dev Patel, Justin Sandefur, and Arvind Subramanian show that a "new era of unconditional convergence" became more pronounced in the first two decades of the 21st century.[3]

Of course, the above graphic measures average income (per capita GDP) and does not show income distribution within each country. Inequality has increased within many countries and is a major challenge facing policymakers. Globalization may have contributed in some degree to that inequality, but having a larger economy makes it easier to finance redistributive policies and public investments that might be able to ameliorate some of that inequality. Furthermore, many forces besides globalization are at work in generating income inequality. As Caroline Freund has pointed out, "there is wide variability in both income growth and inequality despite similar experiences with globalization and technology, suggesting that other factors are largely responsible for the changes."[4]

Despite the enormous difficulties that have confronted so many countries in recent years, the last few decades—the globalization era—have actually seen tremendous economic progress around the world. The recent turn away from open markets risks jeopardizing this progress.

1. In his famous essay "Competitiveness: A Dangerous Obsession," Paul Krugman wrote that rather than describing the global economy as a struggle in which countries were competing against one another, it is a "struggle in which each big economy will succeed or fail based on its own efforts, pretty much independently of how well the others do" based on its own productivity performance. A recent meta-analysis provides a comprehensive overview of empirical studies on the contribution of globalization to higher incomes around the world (see Heimberger 2022).

3. In another recent paper "Global Earnings Inequality, 1970-2018," Olle Hammar and Daniel Waldenström find that the global Gini coefficient (a measure of inequality) fell 15 points and the earnings share of the world's poorest half doubled since the 1990s.

4. Branko Milanovic's famous "elephant diagram," which purports to show that lower- and middle-income classes in the United States and other advanced economies have not benefited from globalization, is often misunderstood. Freund provides a critique of that interpretation, as does the 2016 Resolution Foundation report by Adam Corlett.

Globalization has helped raise incomes almost everywhere since the 1980s

The Great Tradeoff: Confronting Moral Conflicts in the Era of Globalization

Deconstructing Branko Milanovic's “Elephant Chart”: Does It Show What Everyone Thinks?