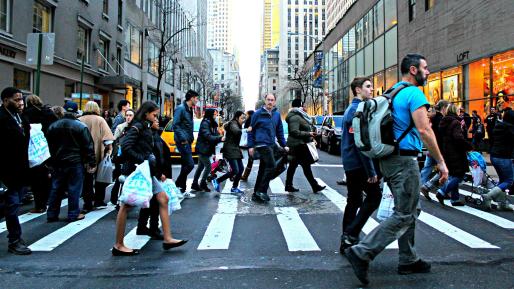 Follow the trend: US demand is back, supply is lagging, but both are likely to grow in coming months

By April 2021 robust consumer spending and strong investment by businesses and homebuilders in the United States had driven total demand nearly back to its pre-pandemic trend. At the same time, employment was about 7 percent below its trend (or 10 million workers short). Even though hours and productivity of employed workers were up, that was still not enough to enable the United States to produce as much as the economy was demanding, with the difference made up by increases in net imports and reductions in inventories.

April 2021 was an eternity ago in COVID-19 time: Cases were rising in the United States through mid-April and deaths were plateauing. Since their April highs, cases have fallen by 70 percent and deaths by 40 percent.

Since April, both demand and supply have likely increased at a rapid pace. Services consumption appears to have been rising rapidly as the economy has reopened, and substantial additional jobs were likely added since April as well. The key question going forward is whether demand or supply returns more quickly and the consequences of any mismatch between the two. Understanding the economy’s recent past can help inform near-term predictions about the economy and also identify key factors to watch as the economy continues to normalize as the pandemic recedes. The most hopeful, and possibly most plausible, scenario is that demand can create supply, thus enabling the economy to end up in a stronger position than the pre-pandemic trend it was on. The path to this favorable outcome is bumpy and uncertain—with other paths possible as well.

To understand what is going on in the US economy right now, it is useful to adopt a specific definition of total demand in the economy as the amount that domestic purchasers (households, businesses, and government) buy in the form of items like cars, cereal, meals, machines, new houses, tanks, and educational services. In the national accounts it is technically called “Final Sales to Domestic Purchasers” and is defined as:

Consumer spending comprises about two-thirds of demand. In April monthly household expenditure was 1 percent below its pre-pandemic trend (figure 1). (For all charts, unless otherwise noted, the pre-pandemic trend is based on fitting data from 2018 and 2019 with a log-linear regression.) 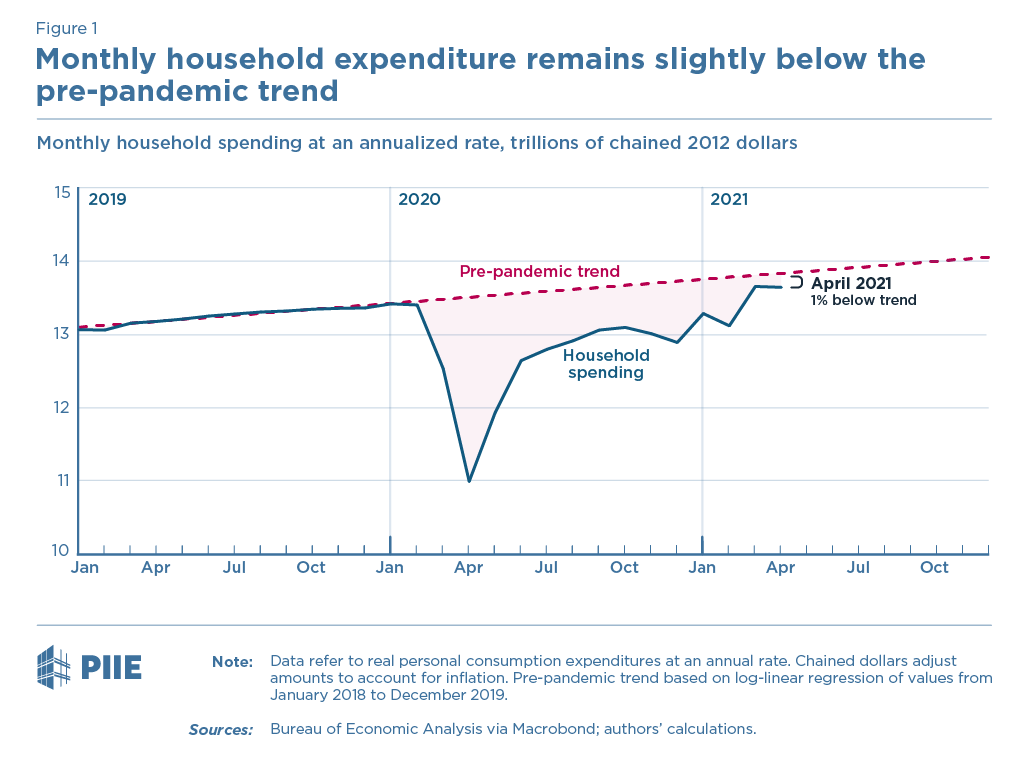 The overall numbers for consumer spending concealed considerable variation. Spending on goods was 11 percent above its pre-pandemic trend, an unprecedented increase seen in everything from cars to furniture to recreational goods (figure 2, panel a). At the same time, spending on services was 7 percent below its pre-pandemic trend, as restaurants, travel, and healthcare remained depressed by the pandemic (figure 2, panel b). 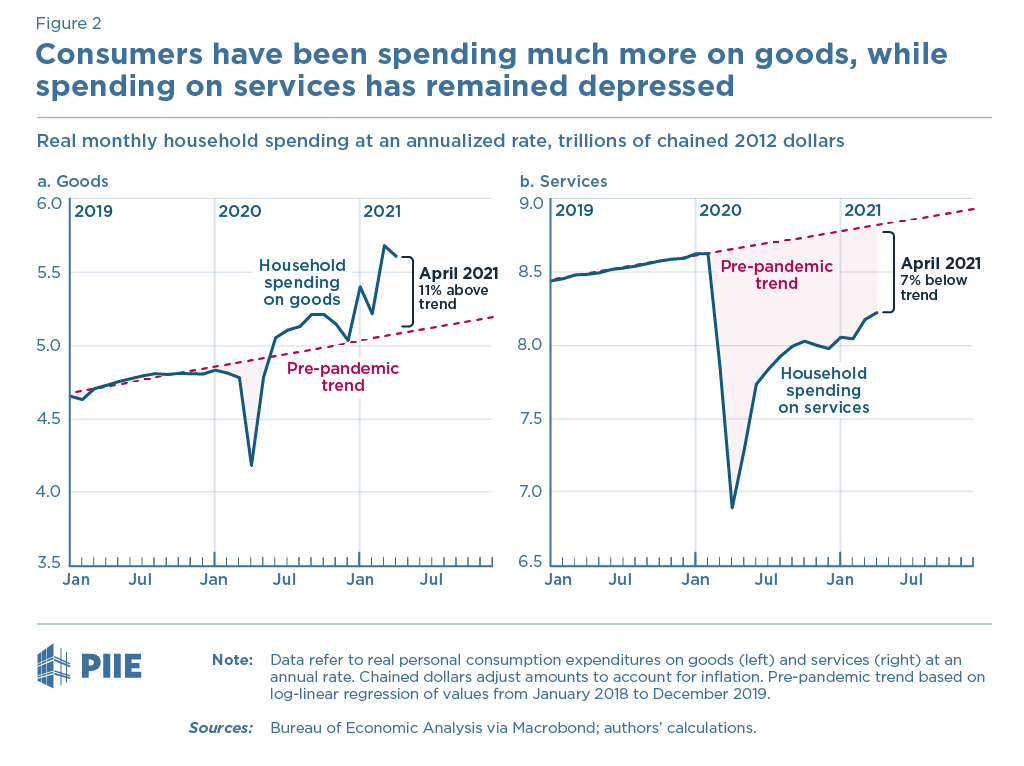 In some other categories, demand was above pre-pandemic trends, likely including new residential investment (fueled by low mortgage rates and strong consumer incomes) and possibly also business investment in plants and equipment (although it is a lumpy category that is not measured at a monthly frequency) (figure 3). 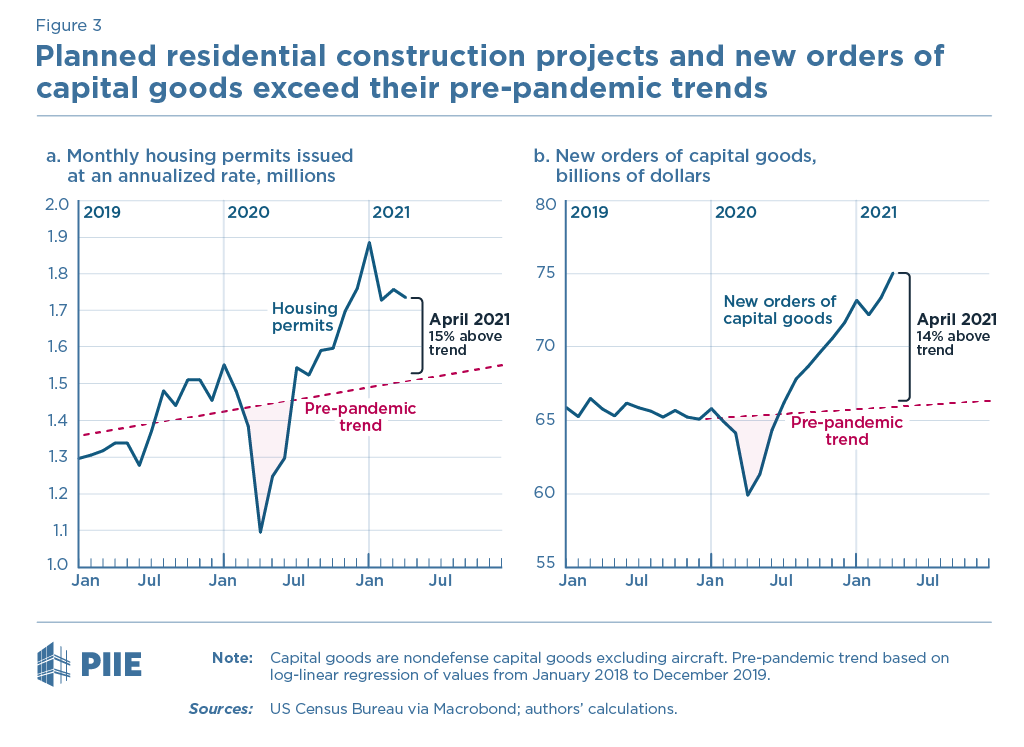 The US government does not measure overall demand at a monthly frequency. The best estimates, which are produced by IHS Markit, indicate that demand in the form of final sales to domestic purchasers was just 0.4 percent short of its pre-pandemic trend in April.

Although US residents were purchasing just as much as they were before the pandemic (adjusted for trends), they were not producing nearly as much. This can be understood by looking at the supply side of the economy, which can be formalized as:

Overall GDP was about 2 percent below the pre-pandemic trend in April, according to estimates produced by IHS Markit (the government does not produce monthly GDP). There is considerable uncertainty around these numbers, but based on the official government data for the first quarter of 2021 and monthly data on major components of GDP like personal consumption expenditures, this estimate is a reasonable guess (figure 4). 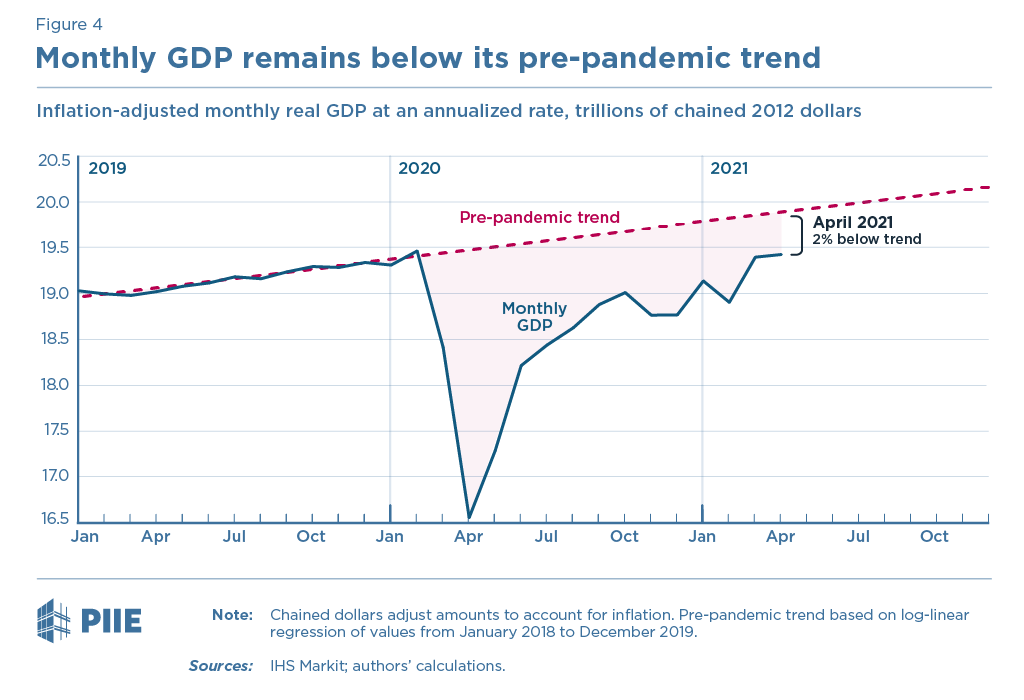 Importantly, this GDP was produced by less labor than prior to the pandemic. In April, aggregate weekly hours worked by US residents in private industry were 5 percent below the pre-pandemic trend (figure 5). This was mostly because employment was 7 percent below trend (or 10 million workers short), while hours for those employed had increased. 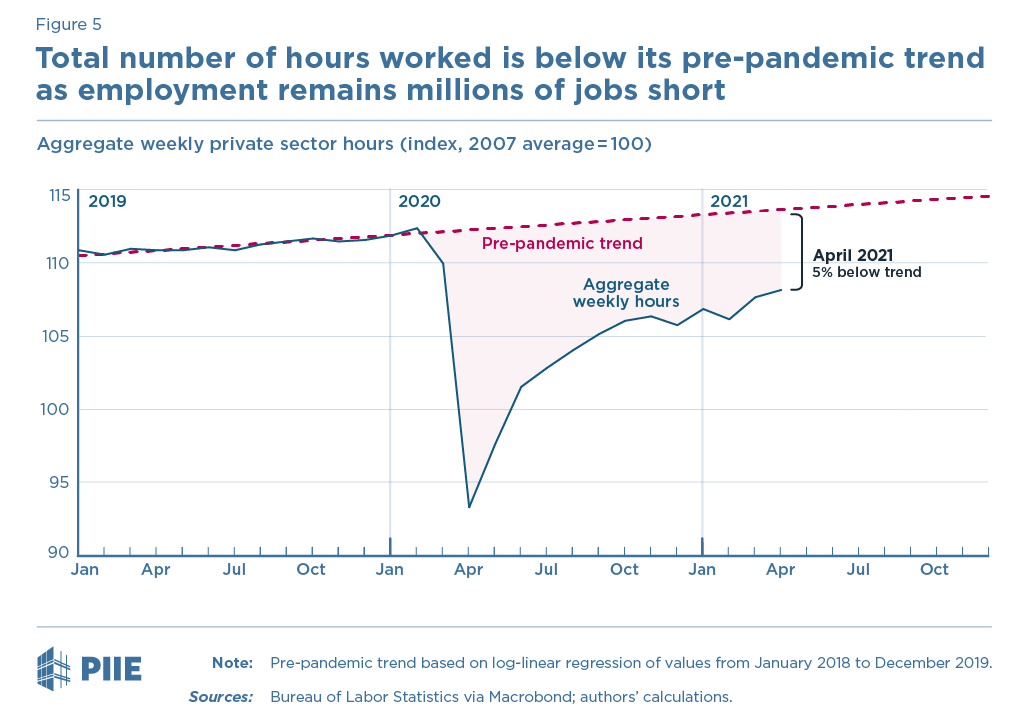 The fact that GDP (2 percent below the pre-pandemic trend) was down by less than hours worked (5 percent below trend) implies that the average amount produced per hour—labor productivity—was up dramatically relative to its pre-pandemic trend, possibly by about 3 percent—an amount that would normally take two years to achieve. In part this increase reflected the changing composition of workers: Unemployed workers appeared to be on average less productive than the average worker, largely reflecting the fact that about one-third of job losses have been in the relatively low-productivity leisure and hospitality sector. A substantial portion of the productivity increase appears to be due to greater work intensity and technological and process changes.

One of the major sources of lagging supply was likely that workers have not returned to jobs as quickly as employers have opened up new jobs. Job openings likely soared to nearly 9 million by the end of April, bringing the job openings rate to a record nearly 6 percent based on extending official government data for March through April using data from the Indeed Hiring Lab (figure 6). The biggest reasons workers did not return to jobs were likely the continued extent of the pandemic and the fact that it takes time to match workers to jobs. In addition, the availability and magnitude of unemployment insurance have enabled more workers to take their time to find the best jobs for them or negotiate better wages or just reduce their work intensity. 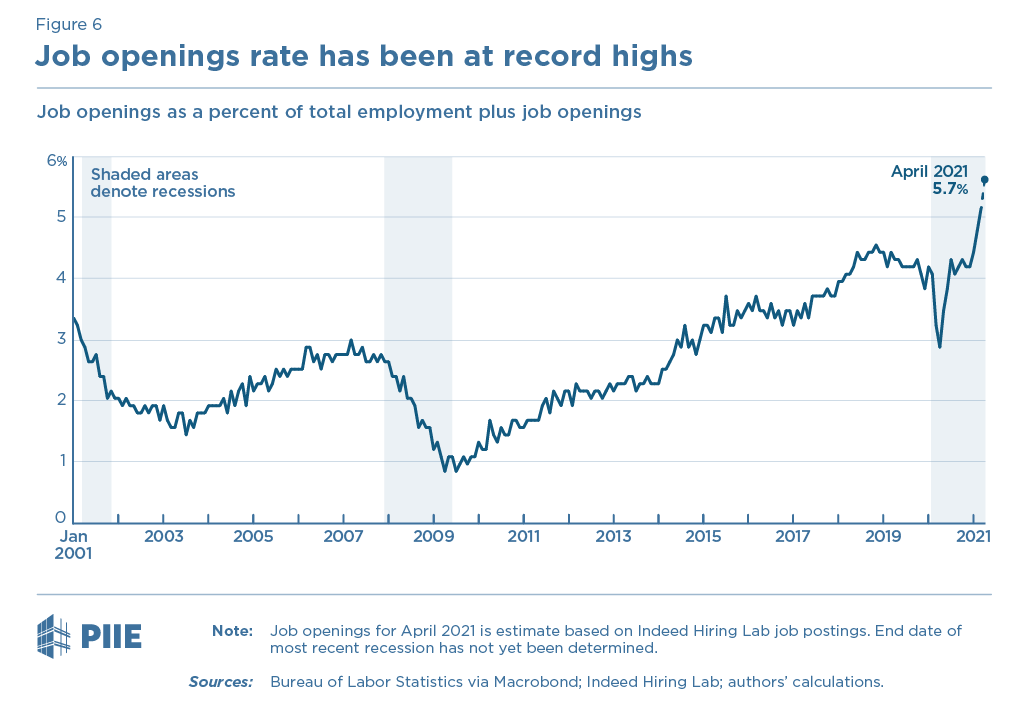 In addition, supply has been constrained by supply chain bottlenecks in areas like microchips, which have affected the production of goods throughout the economy. In other areas, such as lumber and steel, production cuts at the start of the pandemic have left producers unable to keep up with the rapid recovery in demand.

Bridging the gap between supply and demand: Imports and inventories

Under the definition we are using, demand does not need to equal supply because imports and inventories can be used to satisfy the purchases of US residents without commensurate US production. Using the national accounting framework, this can be written as the identity:

Global trade collapsed during the pandemic, with both exports and imports falling. US exports and imports have since recovered, but imports have increased much more than exports (figure 7). As a result the US trade balance in goods in April was about $25 billion worse than its pre-pandemic value, an amount equal to about 1 percent of GDP. The increase in imports fills a reasonable fraction of the gap between supply and demand. (Note only the trade balance for goods is currently available for April; the full trade balance including services will be released later.) 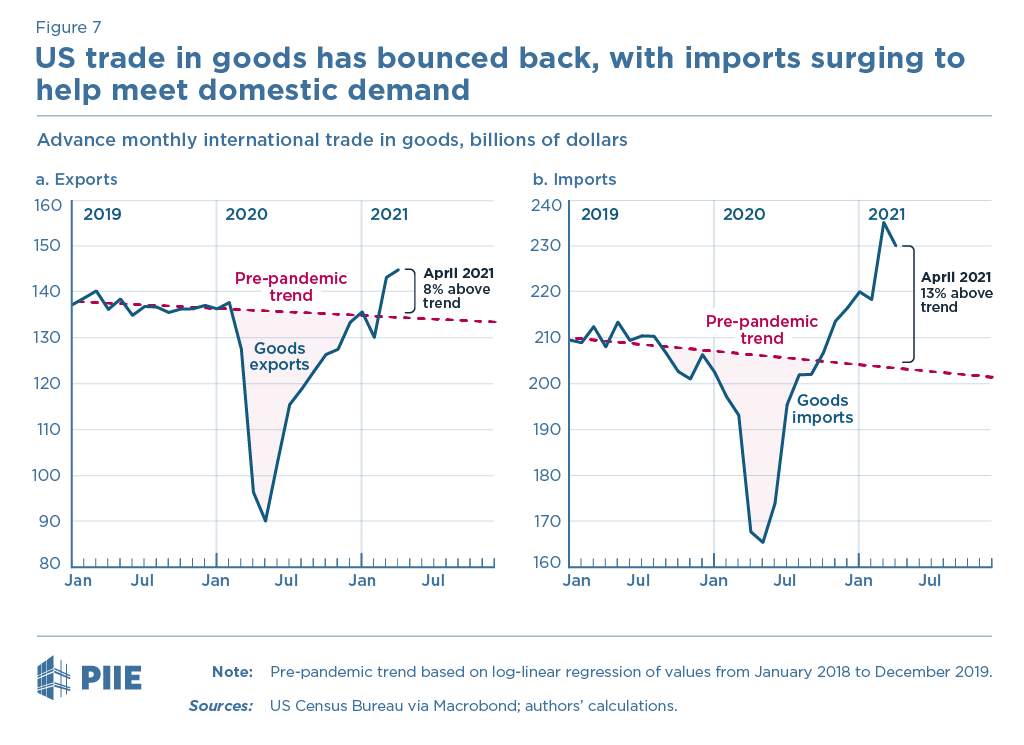 The other way that US residents can buy things that are not produced contemporaneously is by running down inventories. Overall, prior to the pandemic, retail inventories were $655 billion and had fallen to $603 billion in the April data. As a result the ratio of inventories to sales reached its lowest level on record in March (figure 8) and likely fell further in April. 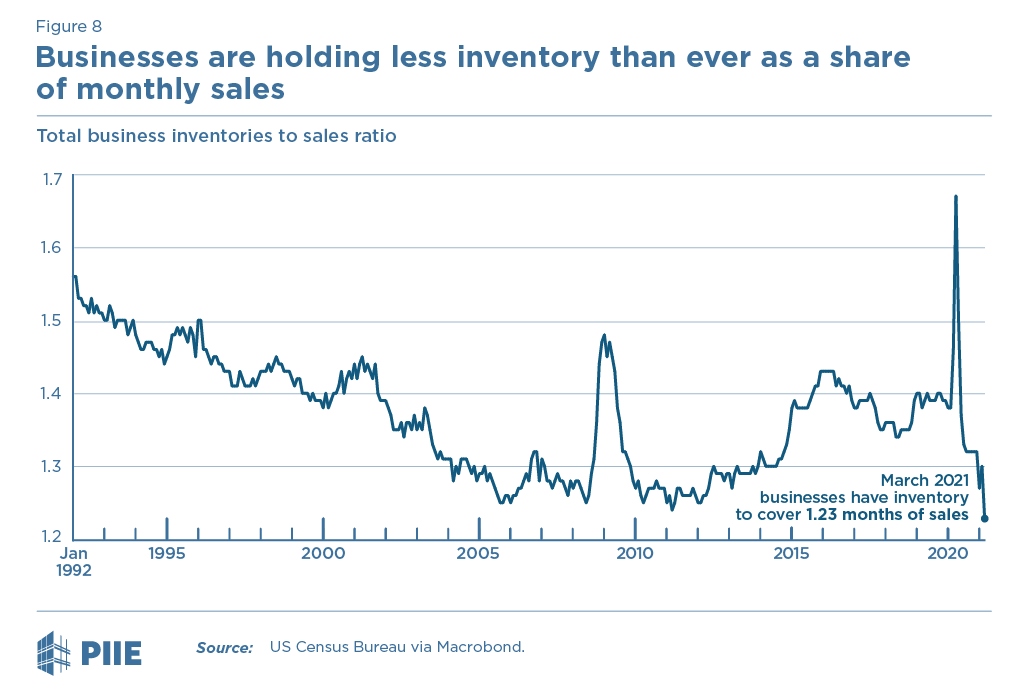 Key questions going forward: How and when demand and supply rise

Demand and supply have almost certainly continued to increase since April. It is likely that services consumption, which typically represents about half of demand, has and will continue to increase rapidly as households generally have healthy bank balances, some continued transfers from the government, and rapidly increasing labor earnings. If services consumption returned to its pre-pandemic trend without any changes in other components of demand (except a corresponding reduction in purchases of food at home), that would mean demand would be about 2 percent above its pre-pandemic trend. 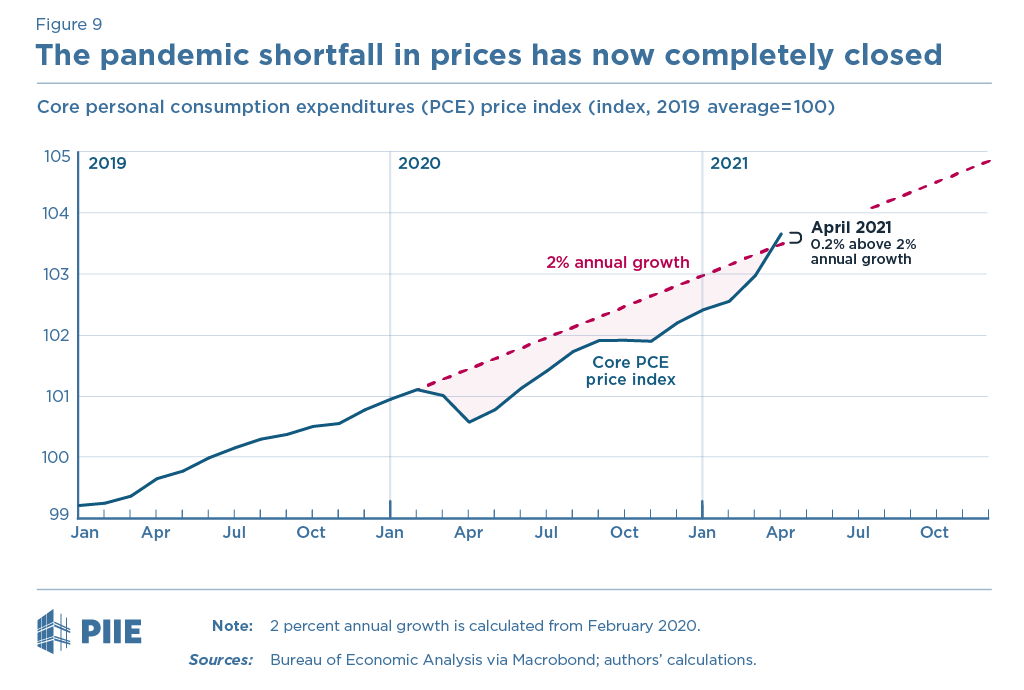 The most hopeful, and possibly the most plausible, case is that the demand side of the economy returns further and faster than the supply side but that demand creates supply, and rising real wages eventually draw workers in—including many who were sidelined by the pandemic or even by the arguably sub-par labor force participation prior to the pandemic. In the interim there would be more price inflation, but over time it would be offset by an economy that returns to something that could even be better than its pre-pandemic path. The most important policy at this point is patience, but policymakers should also do everything they can to increase the supply side of the economy and ensure the demand side does not get too far in front of it.

The data underlying this analysis are available here. The data for figure 4 are proprietary and therefore excluded.