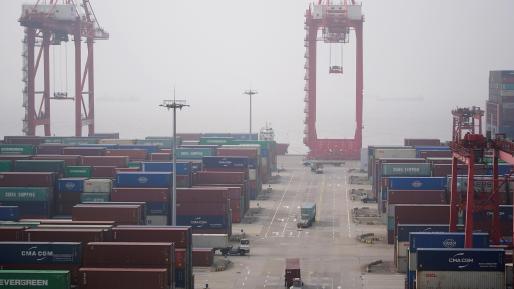 The economic sanctions targeting Russia after its invasion of Ukraine have been described as an effort to permanently weaken its ability to make war. Russia is vulnerable to export restrictions on military-related components, many of which come from abroad. At the same time, most countries have refused to join the US-led coalition in applying sanctions and export controls, leaving a large potential loophole Russia could turn to for parts, technology, and currency.

The situation is complex and dynamic, but the evidence suggests that export restrictions and sanctions are biting Russia's economy and military. Russia's imports have fallen significantly, not only from countries in the sanctioning coalition but, surprisingly, also from countries that have refused to adopt the sanctions, most notably China. After the European Union, China is the second-largest contributor to Russia's import decline since the invasion, despite President Xi Jinping's promise of "no limits" cooperation; the pro-Russia slant of Chinese media; and the display of solidarity represented by the sending of bombers, along with Russia, near Japan during President Joseph R. Biden Jr.'s visit to Tokyo in May.

Russian imports still remain significant, however. Strong action, such as secondary sanctions, could prove necessary to ensure that US technology and goods are not diverted to benefit the Russian military effort.

Sanctions are binding countries that have not imposed them

Higher energy prices mean that despite the embargos in Europe, Russia has plenty of customers for its oil and natural gas and therefore plenty of money flowing in to buy whatever goods and services other countries are willing to sell it. If Russia can use these funds to obtain the components it needs for its war effort and economy from nonsanctioning countries,  "backfilling" will erode much of the sanctions' effectiveness.

Watch what China does, not just what it says

China is by far the most important potential source of backfilling. It supplied a quarter of Russia's imports in 2021—more than any other country—with exports of $73 billion. China has denounced sanctions and proclaimed that it will maintain normal economic relations with Russia. It is a key supplier of the inputs Russia's economy—and likely military—use, providing 57 percent of Russia's semiconductor and 20 percent of its integrated circuit imports in 2020, according to the United Nations' Comtrade Database. Many advanced semiconductors are sent to China to be packaged and could presumably be rerouted to Russia from there. US officials are aware of this possibility and have warned China not to use this potential leakage to help Russia.

As some of my colleagues at PIIE predicted in March, Chinese exporters appear to have internalized the risks of violating export controls and sanctions. Under US export control and sanctions laws, Chinese firms violating the ban on sensitive goods sold to Russia could lose access to crucial technology, goods, and currency (all major reserve currency issuers have joined sanctions). China's behavior reflects this risk (figure 2). Its exports to Russia since the invasion have fallen 38 percent compared with the second half of 2021, in line with the average for nonsanctioning countries.

A compelling factor in China's compliance with sanctions imposed by the West is that foreign multinational corporations are responsible for half of China's exports. These corporations need to be plugged in to the global economy and are presumably following orders not from Beijing but from their own corporate headquarters in sanctioning countries. It is not possible to disaggregate the portion of the post-invasion decline in exports that is due to foreign versus Chinese companies, but it is clear that foreign multinational corporations are not the only driver of compliance. China UnionPay has refused to work with sanctioned Russian banks, and even Huawei, the blacklisted Chinese tech giant accused in the West of being backed by China's military, has curtailed its Russian operations.

Another factor is also clear: COVID lockdowns are not the driver of this decline. China's overall exports since the invasion are down only 8 percent compared with the second half of last year; its exports to Russia are down by nearly five times more. To be sure, publicly available information could be missing covert efforts, but people with access to classified information report that they have not seen any systematic effort by China to evade sanctions or support Russia militarily.

China is not, however, shutting off trade with Russia. Its imports have surged to record highs, as figure 2 shows. Not surprisingly, nearly 80 percent of those imports are oil and gas, which the West's sanctions regimes excluded, in order to prevent even further spikes in the global price of energy. In fact, for all its tough talk, EU imports of petroleum products from Russia post-invasion exceed China's total imports from Russia.

Are the sanctions working?

The kind of restrictions put on Russia have a cumulative effect. Some military stockpiles appear to have run out, and machines need replacement parts or foreign technical expertise that are not forthcoming. As supply chains around the world have discovered, missing a single small component can shut down an assembly line. Some prominent analysts have asserted that the import declines mean the sanctions are "strangling" Russia's economy.

The decline in imports overall has inflicted major pain, and anecdotal evidence suggests that  the inaccessibility of foreign tech and components is hitting Russia's maintenance; supply; and future development of chips, guided missiles, tanks, cars, planes, and much more. Russia's own economy ministry is projecting a GDP contraction of up to 12.4 percent in 2022.

Yet, despite being the target of this economic firepower from 38 sanctioning countries, Russia's economy has not collapsed, its currency has recovered (though the market for rubles is hardly normal), and the volume of imports remains high, despite the decline. The question is whether Russia will get what it needs to continue the war and keep up in cutting-edge industries. Russia has experience working around sanctions, disguising its purchases, and going through shady intermediaries. These workarounds will face major hurdles to succeed at an economywide scale. But chips are hard to control: As anyone who has seen the movie The Departed knows, a million dollars of military chips can easily be smuggled in a small suitcase.

The limited May export data suggest a slight rebound in exports to Russia from countries like Brazil, Vietnam, and China. It may be a result of the ruble's recovery and stability, which improved Russia's terms of trade. It may also be that risk-averse companies halted more business with Russia than sanctions required. Now that they understand which types of goods, payment, and shipping methods do not violate the rules, some may be resuming some of their exports. Increased trade may thus not necessarily mean that sanctions are being undermined.

There is no silver bullet

The main goal of any sanctions strategy is to change the behavior of the targeted country. Clearly, the threat of sanctions and export controls failed to deter Putin's invasion, and their imposition has not forced him to the negotiating table, deterred his military campaign, or collapsed his regime. One key lesson is thus that sanctions alone cannot force an end to war. My PIIE colleagues have found that historically, only one in three sanctions designed to achieve major policy change or weaken a target militarily achieves even moderate success. The extent to which sanctions are making a difference on the battlefield is difficult to assess. One moderate success story appears to be that, like "strategic bombing" of factories behind the battle lines in past wars, the sanctions have made it harder to replace equipment taken out by Ukrainian forces, while Ukraine gets fresh shipments of top-tier military materiel.

Despite the exemptions granted to oil and gas, the multilateral sanctions have had a major impact, depriving Russia of billions in imports it cannot easily substitute. Their effectiveness highlights another lesson: Controls must be multilateral to be effective, as in today's globalized world it is easy to switch to another supplier. But certainly one of the crucial successes of sanctions is that China and other countries that would like to bail out Russia have found it is difficult to do so and prudent not to try.

Sanctions against Russia are also hurting its trade with nonsanctioning countries