Can Greece Make a Deal with Europe? Part 2: What Kind of Deal Can Greece Hope For?

In the confrontation over Greece, Prime Minister Alexis Tsipras is under more pressure than the euro area to make a deal to avert a default or a Greek exit. The euro can thus hold out for 80 to 90 percent of their demands. For Tsipras, the trick will be to make concessions but sell the deal to the Greek people as a dramatic change from the status quo. It should consist of three elements: the Greek debt stock, the short-term fiscal stance, and structural economic reform issues.

The euro area can be flexible in negotiating the restructuring of the debt stock, which is 175 percent of GDP. Some 80 percent of that debt is held by the official sector in the euro area (60 percent), the International Monetary Fund (12 percent), and the European Central Bank (8 percent). The rest is held by the private sector (including Greek banks, other banks, and various speculators) in restructured government bonds (14 percent) and short-term T-bills (6 percent).

The fact that most Greek debt is held by public institutions backed by European taxpayers makes Greece's case special and inapplicable to other troubled countries. Public debt throughout the euro area is in the hands of private (and often mostly domestic) investors.1 The euro area can restructure Greek debt without setting a precedent for other members. Greece's unusual status thus presents obstacles and opportunities for a new agreement.

While Greek voters want debt relief, in other words, European voters and taxpayers will want a say in whether to go along with that demand. It is unrealistic for Greece to claim that its voters trump voters in other countries. Indeed, inside a currency union where no member is fully sovereign, it is inherently impossible for any newly elected government to claim that their new electoral mandate trumps everything else.

Following the formation of a new government, Syriza representatives have wisely given up on their election campaign demands for a large debt writedown by the euro area. Such demands would be politically impossible across euro area capitals, where parliamentary majorities in even center-left governed countries like Italy and France would never agree to it. Despite the claims of some commentators , Germany and others in the euro are unlikely to be impressed by moral demands for a debt writedown.

An argument is being made that Germany should be conciliatory because its own external debts were reduced at the London Debt Conference in 1953 from about 20 percent to about 10 percent of GDP.2 That analogy is fallacious. Germany was not alone in benefiting from large-scale debt reduction after 1945. The United States converted its Marshall Plan help into 85 percent grants (leaving just 15 percent as loans) to all European recipient countries. Poland and Bulgaria restructured their debts after 1989.3 And Greece got a debt writedown in 2012 of 50 percent of GDP in net present value (NPV) terms.

Moreover, the new Federal Republic of Germany took on debts of earlier German states (Imperial and Weimar) almost twice its size.4 It was granted its debt relief only after disavowing its earlier political and economic system and adopting a new constitution drafted at the behest of the Allies. Germany also fully implemented major structural reforms and agreed to more towards its own Cold War defense in Europe. Nothing remotely approaching these political circumstances applys to Greece today.

Greece does not necessarily even need another haircut on its debt, which currently costs the country only about 2 percent interest, one of the lowest rates in the euro area. A more sensible approach would be to extend the maturities of the debt to secure these low rates for many years to come. Figure 1 shows how the maturity structure of the Greek debt moreover offers ways to achieve this.5

Figure 1 Greek debt by type and maturity (billions of euros) 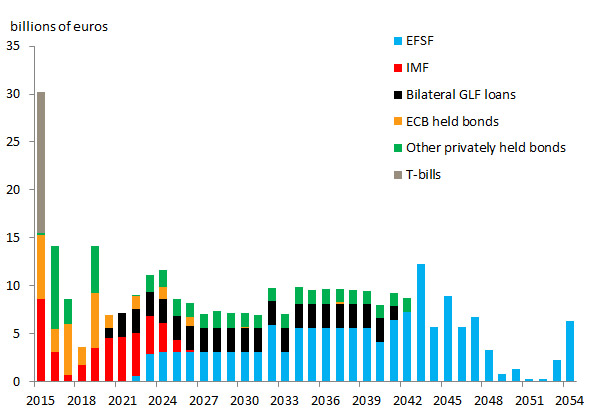 As figure 1 indicates, Greece's publicly held debt already has a long maturity. The euro area deferred Greek interest payments on loans from the European Financial Stability Facility (EFSF) for 10 years and cut interest rates on the bilateral Greek loan facility (GLF) loans to only 50 basis points above Euribor rate. In addition, the European Central Bank (ECB) has agreed to revert Greek interest payments on its holdings back to Greece. Thus the euro area loans to Greece are already cheap. Greece's debt to the International Monetary Fund (IMF) and remaining private debt holders (a combination of restructured post-PSI bonds and new Greek government bonds issued earlier in 2014) that are more costly. (Loans under the IMF's Exceptional Access program carry up to a 300 basis point surcharge.)

Negotiators should thus pursue the goal of replacing Greece's expensive and relatively short maturity IMF loans with new, longer-dated, and cheaper ESM (European Stabilization Mechanism)/EFSF loans. Similar steps were undertaken for Ireland and Portugal in 2014. It is ironic that IMF loans are more expensive than euro area credits. The opposite was the case early in the crisis. But this option would save Athens on interest costs and postpone debt repayment to the future. The euro area should also offer to pay out the bonds currently held by the ECB, again postponing debt repayments to the future, even though it would not, because of the current interest income rerouting back to Athens, save Greece much in interest payments.

As figure 1 suggests, this step would save Greece's budget billions of euros, while reforming the Troika arrangement, eliminating the IMF's and the ECB's financial exposures to Greece. The ECB can then formally exit the Troika in compliance with the recent European Court of Justice (ECJ) ruling that sought to limit its role on this issue.6 The IMF would likely shift to a more informal advisory and surveillance role, which would still allow the euro area to benefit from its technical expertise, but leave actual program oversight and compliance to the euro group. Conveniently, Tsipras could then claim credit for freeing Greece from the Troika and getting its debt restructured.

There would be a downside to this arrangement. The euro area would be subjected to higher financial exposure to Greece, although its exposure is already high. Skeptical euro area parliaments would also have to approve an increased loan offer that handed Tsipras a political victory and removed the IMF and ECB from any direct financial involvement. Longer-term incentives would not have changed, however, and moral hazard risks would be contained by postponing a decision to restructure the euro area's Greek debt holdings.

A replacement of debt along these lines means that it would not be necessary to undertake something complicated like turning the Greek loans into GDP-linked bonds, as proposed by Tsipras and his finance minister. Their idea raises moral hazard concerns7 and seems irrelevant, given that interest rates paid by Greece are already rock-bottom on European loans. Linking rates to future growth rates merely raises the prospect of higher rates that it could ill afford. For this idea to make sense, the outstanding debt principal would have to be first reduced and then linked to future growth rates, which is not politically possible in the euro area. Advocates maintain that this step would be akin to converting debt into equity, but the analogy is misleading. Athens would have to give the new equity owners voting influence through their new shares, an obvious political impracticality for a government opposed to foreign influence on its economy. No sensible corporate debtor would accept such a deal-to-equity swap without influence, either.

With several billion euros freed from a restructuring of the IMF and ECB holdings of Greek debt, Greece could undertake new social spending and a somewhat looser fiscal policy in coming years. Tsipras could then claim to have ended austerity and increased growth. The Greek government would have to commit to continuing to run a primary surplus of probably at least around 3 percent of GDP in the coming years, however.

The euro area should not ease up on demanding structural reforms for Greece, particularly the overdue overhaul of economic institutions and regulations. The Tsipras government's early moves to reregulate the Greek labor market, raise the minimum wage, and disband the privatization agency must be reversed and all other outstanding structural reform issues from the Troika program must continue. Limited exceptions can occur if Tsipras can find alternative revenue sources of tax revenues, such as taxing sheltered sectors of the economy (like shipping) or cracking down on alleged oligarchs.

The general quid pro quo between Greece and the euro area should be a further restructuring of the publicly held debt, a much reformed Troika, and a somewhat easier fiscal policy in the short-term in return for structural reform—even if this means Tsipras breaking many of his campaign promises.

All told therefore, even if it looks like the coming months will be very volatile for Greece, a deal is not impossible. It would even hold great potential benefits for Greece, Syriza, and the euro area. The Greek economy would avoid another crisis, Syriza (with Tsipras at its helm) would replace PASOK as the mainstream center-left party in Greece, and the euro area would neutralize new radical leftwing political movements elsewhere in Europe. Forcing Syriza toward the center would be far better than laying waste to its economy to teach a lesson to leftists in other countries, including Podemos supporters in Spain.

Can Tsipras deliver? Hopefully yes. But if not, a new government that can will have to be formed in Athens.

1. Portugal and Ireland has Troika (and other public) ownership of their government debt of 40 to 45 percent, though this percentage is quickly declining as the countries engage in early repayments of IMF loans.

2. Germany's total external debts, which included both pre- and post-WWII debts were reduced by about 15 billion deutschmarks. More importantly though, as the time of fixed exchange rates, this sum amounted to about 80 percent of German exports in 1953. The relief granted to Germany at the time therefore represented a meaningful reduction in the amount of trade surpluses Germany had to run (mostly of course against the creditor countries!) to repay its debts. See Jürgen Kaiser (2013) and Timothy W. Giunnane (2004) for details about the 1953 agreement.

3. Post-communist countries were hardly in a much different situation after 1989 than West Germany was in 1953 so soon after the end of the war .

5. I am indebted to Peter Schaffrik from RBC Capital Markets in London for making their data from a previous RBC publication available to me.

6. The ECB and the Single Supervisory Mechanism would likely still be observers in relevant meetings between the Eurogroup and Greek authorities.

7. See my colleague Paolo Mauro on this issue.