Are US Stocks Overvalued?

US stock prices rose for seven years in a row through late last year. During that time, the US economy repeatedly underperformed expectations. Popular indicators of stock valuation are above historical norms, even after the declines of the past few weeks. It is therefore no surprise to hear some analysts say stocks are overvalued and we are due for a substantial adjustment. (Somewhat ironically: One of the websites that give (reliable) data on current and past earnings, stock prices, and interest rates, has an ad banner that reads: "Dow to drop 80% in 2016.")

Let's start with what fuels the fears of some analysts. Perhaps the most widely used gauge of stock valuation is the price-earnings (P/E) ratio, the ratio of a stock's price to the annual corporate earnings associated with that stock. Figure 1 displays two measures of the average P/E ratio for the firms in the S&P 500 composite equity index. The dotted line is the standard P/E ratio based on reported earnings over the previous four quarters. Because of the unprecedented collapse in earnings during the Great Recession, this P/E measure soared to more than 100 in 2009, literally off the chart. The standard P/E measure reached nearly 22 late last year and is currently around 20, a bit higher than its 60-year average of 19.

A popular alternative measure proposed by Robert Shiller of Yale University uses a 10-year average of past earnings (adjusted for inflation) in order to smooth out temporary fluctuations (the solid line in figure 1). The Shiller P/E measure eliminates the massive spike in 2009 and allows the fall in stock prices that year to show through. Although the two P/E measures were often close to each other in the past, the Shiller measure has been consistently higher than the standard measure since 2010.1 The Shiller P/E ratio reached 26 late last year and is currently around 24, compared with a 60-year average of 20. This elevated Shiller P/E measure is commonly cited as an indicator that stocks may be overpriced, including by Shiller himself. 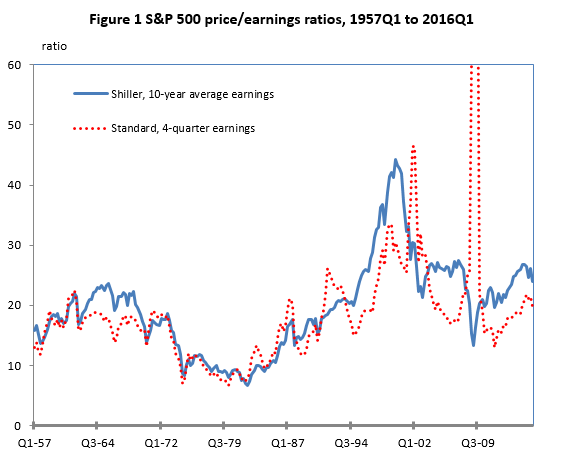 Note: The Shiller measure adjusts lagged earnings for inflation. The standard measure peaked at 122 in 2009Q2.

Source: Haver Analytics. 2016Q1 is based on January only.

The way to make progress is to compute expected returns on stocks and bonds, and look at the equity premium, pre- and post-crisis. With this in mind, table 1 compares expected real returns on stocks, constructed in three different ways, with expected real returns on bonds, constructed in two different ways. To smooth out temporary fluctuations, the measures are based on averages of four quarterly values in each year. We compare expected returns as of 2015 with those of 2005, a time when there was little concern about overvaluation in stock prices. Our results would be similar if we had compared with any year in the mid-2000s.

The first measure is the earnings-price (E/P) ratio, i.e., the reciprocal of the P/E ratio. E/P reflects the real, or inflation-adjusted, rate of return an investor can expect on holding stocks over a long period of time under the assumptions that (1) stock prices rise with overall inflation (reflecting the "real" nature of corporate assets) plus any earnings that are not passed on to investors as dividends, and (2) earnings grow in proportion to the value of corporate assets.2 The first line reports the standard E/P ratio, the second line the Shiller adjusted E/P ratio. The measure in the third line focuses on dividends, and uses the Gordon formula, which states that the expected return on a stock is equal to the dividend yield plus a weighted average of future growth of dividends per share. The computation in the table assumes that dividends per share will grow at the same rate as GDP, and uses long-term GDP growth forecasts from Consensus Forecasts surveys.3

We measure the real return to holding a bond in two ways. The first is the nominal yield to maturity minus expected inflation. We look at a 10-year bond, but the results would be similar if longer maturity bonds were used. We use as a measure of expected inflation the 10-year projection from the Survey of Professional Forecasters conducted quarterly by the Federal Reserve Bank of Philadelphia. The second is the yield to maturity on a 10-year inflation-indexed bond, or TIPS.

The last two sets of rows give the equity premium, defined as the difference between the expected rate of return on stocks and the expected rate of return on bonds. In all six cases, the equity premium is higher in 2015 than in 2005. Put another way, stock prices were more undervalued in 2015 than they were in 2005, and after the decline of the past few weeks, even more so.4

You may disagree with the assumptions about dividend growth, and find them wildly optimistic. Or you may disagree with expectations embodied in the yield curve, and believe that real interest rates will be much higher in the future, reflecting higher real rates or higher term premiums.5 But, if you accept current forecasts, and you accept the notion that stocks were not overvalued in the mid-2000s, then you have to conclude that stocks are not overvalued today. If anything, the evidence from 150 years of data is that the equity premium tends to be high after a financial crisis, and then to slowly decline over the following decades, presumably as memories of the crisis gradually dissipate. If this is the case, then stocks look quite attractive for the long run. Obviously, anything can happen, be it further bad news on growth or sharp increases in real interest rates. But, in terms of their expected value, stocks are not overpriced today.

2. Of course, stock prices are volatile and can rise by much more or less than implied by these assumptions over periods as long as five or ten years, but in the long run any deviation from these assumptions is not sustainable.

3. We have explored more sophisticated constructions for expected dividend growth, based on the time series behavior of dividends and GDP. Results are very similar to those used in the table.

4. We note that anyone who bought stocks in 2005 and held them to 2015 would have earned an average annual return more than 3 percentage points higher than that on holding a 10-year nominal bond.

5. There is evidence that the Federal Reserve's bond-buying programs have lowered term premiums in bonds, but not so much as to lower expected returns in long-term bonds below those of short-term bonds. (This estimate of the 10-year term premium is close to zero.) The Fed plans to reduce its bond holdings slowly over many years, so any future rise in term premiums is likely to be gradual.

The US labor market is running hot…or not?