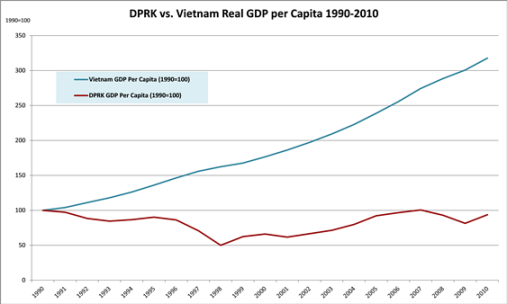 Vietnam may be uniquely positioned to offer encouragement to North Korea on the issue of economic reform.  Since both countries experienced a similar withdrawal of Soviet aid in the 1980s, Vietnam has more successfully reformed its economy, and experienced superior economic performance, as shown above, all the while maintaining control by the communist party. (The past point may be regrettable, but from the standpoint of Pyongyang it is attractive.) And Vietnam is presumably less threatening than North Korea’s giant neighbor, China.

Moreover, if there is ever a country that could give North Korea a lesson on how to manage relations with the United States, it’s Vietnam.  The Vietnamese killed more Americans, more recently, than did the North Koreans, but Hanoi normalized relations with Washington, negotiated a bilateral investment treaty, and through the TPP process, may ultimately enter into a free trade agreement with the US.  So when I hear that the North Koreans are talking to the Vietnamese, I perk up.

My interest was piqued in July by an article by Choi Song Min in the DailyNK in which he reported that “at the start of last year [2011] the Central Party ordered provincial Party cadres to take time to research Vietnamese reform and opening, so some people in broader society also came to know a bit about it.” More recently two articles this month in the German press have revived this story.  In a Frankfurter Allgemeine article, an unnamed German economist claimed that “There is a master plan.  They want the opening [to occur] later this year,” and that the North Koreans are studying the “Vietnamese blueprint whereby selected enterprises for investment are picked out.” Sarah Berning in Deutsche Welle online quotes German scholar Werner Pfennig to the effect that "If North Korea really does have any kind of example, then it is Vietnam..Special economic zones along the lines of the Chinese model have, diplomatically speaking, had limited success in North Korea." Instead, "The belief in North Korea is that Vietnam follows an economic policy in its dealings with other countries in which Vietnam has complete control. That is what makes Vietnam so attractive." And it goes without saying that Hanoi unified a divided country.

So the Vietnamese experience offers some obvious parallels and attractions from the standpoint of North Korea. But is there a Vietnamese model and is it portable to the Korean peninsula?

Vietnam and China share one important characteristic that would appear to be absent from the North Korean case.  When both countries started their reform processes, in the late 1970s in China and roughly a decade later in Vietnam, both countries had more than 70 percent of their respective labor forces in agriculture. (North Korea has perhaps half as much.)  The existence of a large labor-intensive agricultural sector is important, because reform of low-tech labor-intensive agriculture is relatively easy, and it set off an arguably Pareto-improving transformation which everyone was made better off—incomes rose for the farmers, incomes rose for those leaving the farm for the emerging non-state owned light manufacturing sector, and workers in the old state-owned heavy industry sector saw their real wages rise as the price of food declined and its availability and variety increased.  Needless to say, a reform path in which most or all of the population is being made better off more likely to be politically popular and sustainable than one generating losers and blocking coalitions.

In contrast, North Korea is, at least in principle, more industrialized than Vietnam or China were when they started their reform processes.  In terms of the composition of output, at least on paper, North Korea more closely resembles parts of the former Soviet Union or Eastern Europe. Reform of a more industrialized economy is more difficult and is more likely to create losers and generate political opposition.  That said, the industrial proletariat of the North Korean rustbelt may be so beat down that any change might be beneficial and even if it were not, their ability to block reforms may be very weak.  So the starting points appear significantly different and it is unlikely that doi moi would deliver the same gains in North Korea that it did in Vietnam.

And the Vietnam model is not without its weaknesses, particularly in regard to corruption. Given the high levels of corruption already existing in North Korea, the quote from the Frankfurter Allgemeine that the North Koreans are studying the “Vietnamese blueprint whereby selected enterprises for investment are picked out” caught my attention.  Eddy Malesky at Duke has done some really innovative research on corruption in Vietnam, particularly as it applies to the foreign investment regime. Nevertheless, in the greater scheme of things, the North Koreans talking to the Vietnamese has to be better than them talking to themselves.

And, of course, we cannot conclude this post without the obligatory bad pun: when it comes to Vietnamese models, I’ll take... Tran Nguyen.

I think it's worth noting that when Vietnam opened up, it didn't have as much strong ties to China as North Korea does. Although Korean History often depicts Goguryeo (the Ancient Korean kingdom which North Korea loves to tout they are the spiritual descendants), as a strong nation that successfully opposed Chinese forces, for the most part, Korea has been under China's sphere of influence for a big part of its history. Relations have always been good. Although Vietnam had collectively about 1000 years of independence from China, things were never as peachy in contrast. Because Vietnam's conflict with the US is a mere blip compared to their conflict with China, it's natural that it would be easier for Vietnam to reverse its anti-American sentiments than North Korea, and turn to the economic powerhouse of America. Sad to say, but I think it's America who really has to counter "China's Sunshine Policy" on the North, if they want them to open up, and formalize relations.

What 阿江 said is true. Moreover, right during the war, some Vietnamese leaders had already foreseen a future of necessary good relationship with the U.S.
During its rebuilding and reforming efforts after the war, Vietnam made many mistakes - a lot of which the government is publicly in denial about. Although most people who has lived or researched deeply about the era would know about these, it is uncertain how North Korea would evaluate them.
Also, North Korea puts a lot of pressure on military power while Vietnam has been pretty much appear as peace-loving. If North Korea look at Vietnam's story of opening up, I doubt the peace-loving part would be adopted though.

Slave to the Blog: Tech Edition