This blog has followed Park Geun Hye’s Trustpolitik and unification initiatives closely, and has been broadly sympathetic to the former and puzzled by the latter. But in the aftermath of the talks and tentative agreement, it’s important to restate the obvious. The reason the administration has had such difficulty making any progress vis-à-vis the North is not for lack of trying: the problem is that North Korea has not been interested in rapprochement, or at least on terms that would be in any way acceptable. The agreement has opened opportunities. Whether they will pan out is still to be seen, but to say that talking is risky is hyperventilating. The first step: Red Cross talks on the family reunions, the only part of the agreement with a date-certain attached.

Critics don’t see it that way. The Chosun Ilbo provides grumpy "on the one hand, on the other hand" commentary. Josh Stanton provides a more full-throated condemnation. Stanton says we are right back where we were, and that is quite possible. But the main criticism is that North Korea didn’t offer a real apology and Hwang Pyong-so was able to control the domestic message. But this criticism is not entirely warranted. We looked very closely at exactly what Hwang said, and it is worth reproducing in full (translated from the You Tube version here).

Hwang: As was reported, with much publicity here and abroad, last [August] 22nd through 24th we held North-South high-level emergency talks at Panmunjom. We held sincere consultations on the fundamental problems of how to improve North-South relations and ease the tense state of countries moving towards war.

Now I will announce the contents of the joint agreement.

(Hwang reads the statement verbatim; for the text see our earlier post on the agreement)

This agreement coming out of the joint high-level meetings will prevent military conflict and clashes between the North and the South, and ease tensions. This result to improve North-South relations comes from the fundamental struggle and sincere effort by our [North Korean] army and people.

Through the high-level emergency meetings, South Korean officials learned a serious lesson: If they create groundless, unilateral incidents that they also judge unilaterally, and provoke the other side through one-sided behavior, this will only make the circumstances tenser and cannot help but lead to a military clash.

Through this joint effort the fact that a new atmosphere of improved North-South relations was created I think is a relief. I hope that South Korean officials hold onto the spirit of the joint high-level emergency talks agreement and move forward to contribute practically to the development of North-South relations.

We will put full effort into ushering in the time that all Korean people hope for, the time of prosperity and unification.

What do we make of this? Yes, the story is spun. Surprise, surprise! But what is remarkable is that Hwang read the full text of the actual agreement, in which “North Korea expressed regret…” How frequently does that happen? A number of collations of North Korean regrets have been floating around and we use the following one below that we translated from Hankyoreh. Note that even though he uses the term "유감" (yoo-gahm)—usually translated in this context as “regret” and not the same as “apologize”—Hwang’s statement is more direct than even the open-and-shut case of the Yeongpyeongo-do shelling, which gets a more round-about treatment. And Hwang going on national TV and expressing regret? To our knowledge, this is virtually unprecedented and makes us wonder whether the North Korean publication of the agreement was even part of the deal. 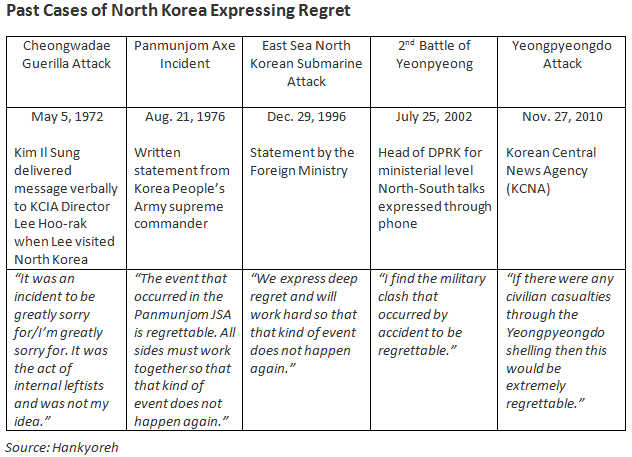 But the main news is—as we predicted—the elite politics of the whole affair, and they suggest both that it was a stand-down and that its effects are still playing out. After the signing of the agreement, Kim Jong Un chaired a meeting of the expanded Central Military Commission on August 20; this body is technically a party institution and the channel through which the party exercises operational control over the military and the military industrial complex. An “expanded” meeting would typically include not only CMC members, but senior members of the WPK Korean People’s Army [KPA] Committee, KPA service branch commanders and corps commanders. The purpose was no doubt to both sell the agreement—Kim Jong Un explicitly said that nuclear weapons contributed to the agreement—and to dress down whoever might have been responsible for the placing of the mines. (We may never know who actually ordered their placement, but cannot necessarily assume it was from the top).

But the brief KCNA dispatch on the meeting said that some members were dismissed. Then, all of a sudden, Kim Jong Un has been out of public view for a week or so. Apparently, it was not his job to sell—or even be publicly associated—with this agreement; that was left to Hwang Pyong-so and Kim Yang-gon, both of whom appeared on state media explaining the agreement. A brief anecdotal sampling of three North Koreans in the southern part of the country from our friends at DailyNK found that they immediately saw through the spin (and were in any case more preoccupied with the disruption of the alert status). Also unseen (as of the Chosun Ilbo reporting of a few days ago) were Ri Yong-gil, the chief of the Army's General Staff, and Kim Yong-chol, the director of the General Bureau of Reconnaissance. Is it coincidental that they were in the chain of command with respect to the August 4 mine incident? The fallout from this event is far from over.

This formula has now raised the question of whether the Cheonan is next; Korea Times covers the story, with more detail in the Korean than English version of the piece. The Korean version of the piece quotes MoU spokesman Jung Joon-hee who hints at the possibility (to be discussed in additional talks) of trading a Cheonan apology or expression of regret for the lifting of the May 24 sanctions. Lifting the May 24 sanctions is a virtual inevitability and one that I have defended on somewhat different grounds than standard engagement logic (that the South has to separate economics and politics and get out of the business of subsidizing North-South trade). Jung also explains the way the South sees the issue: "Regarding claims that only expressing regret over the landmine explosion was an insufficient response from the North, Jung says, ‘this [expression of regret] is an expression that is in accordance with common practice internationally. Internationally, it is accepted as an apology.'” (Which raises the boomerang question of whether Abe’s statements will be taken at face value and South Korea-Japan relations can get back on the rails as well. Hankyoreh has more on the apology debate here.

But the real story is as we predicted: the domestic fall out in the North.

Today's blog demonstrates why NK: Witness to Transformation" is a go-to source for the interpretation of events, and for short-cuts to other reports and news that someone who may not be following NK full-time is grateful to have.
The ROK government's "hard line" shows, as do many examples in history, that force, or the willingness to use force, or in the aftermath of use of force, allows diplomacy a chance to operate.

There is a decided difference between "regrettable" 유감 스럽다 and "express regret" (and I include a longer sequence quoted in the Hankyoreh): “북쪽은 남쪽 지역에서 발생한 지뢰폭발로 남쪽 군인들이 부상을 당한 것에 대하여 유감을 표명하였다” and makes it very clear the subject of the expression of regret. As the charts point out there is a difference between those incidents that merit "regrettable" and those that merit "express regrets" because the subject of the latter is North Korea whereas the "regrettable" is a passive tense. What will be interesting in coming days is not only whether the divided family talks go but how the meeting between Park Geun-hye and Xi Jinping might continue to impart further momentum to this process. Or not.... Inter-Korean interaction is not always a theme characterized by unconstrained optimism. In any case, let me join in the praise of "Eyewitness" in following these complex topics.

Thanks for the comment on the translation. We did find there to be a distinction between the passive and direct voice here and translated accordingly.

Also, in the first box in the chart for the "Cheongwadae Guerilla Attack" it actually would probably be more directly translated to a "sorryful incident" but that's not an expression in English so I included two different possibilities because the meaning is probably somewhere in between "it was an incident to be greatly sorry for" and "I'm greatly sorry for" --I think it's closer to the former. The other caveat for messages that were conveyed privately from official to official is that the possibility of something not getting transcribed word for word is higher.

Translations are of course always tricky because many words, concepts, and grammatical functions don't translate perfectly-- especially from a language like Korean to a language like English. I'm happy to hear any other ideas on the translation, we're always keen on getting these things right.