Earlier this month, Steph Haggard wrote a post on sources of legitimacy in authoritarian regimes which drew an acidic response from Rüdiger Frank who grew up in East Germany. One potential source of national pride and regime legitimacy now being emphasized in North Korea is achievement in international sports competitions. Kim Jong-un, in a message sent last month to a national meeting of athletes, the seventh of its kind and the first since he took power, emphasized the role of sports in “increasing the national power, exalting the dignity and honor of the nation, arousing national pride and self-esteem among the people and making revolutionary spirit prevail in the whole society.”

According to KCNA, the conclave was intended to “discuss the tasks and ways for putting the nation's physical culture and sports on the world level at an early date.” The country has established a new dedicated government agency, called the National Sports Guidance Committee to promote sport throughout the country, and according to Ri Chi-ung, vice-director of the Mass-based Sports Department of North Korea's Ministry of Physical Culture and Sports, “The heated sporting zeal in the whole country bolsters production and construction.” The language used by Kim Jong-un in promoting these initiatives was predictably militaristic. After he lamented the country’s poor performance in international competition, Kim predicted that the new program would turn the country around “within a few years” and harkened back one of his grandfather’s sources of legitimacy, instructing that “Sports officials and coaches must implement the tactics of anti-Japanese guerilla-style attacks in each sport event in order to take the initiative in every game and triumph.”

Kim bemoaned that North Korea was “trailing behind the world” in sports science and strategy. One response is to import talent as a short-term stop-gap, and indeed, North Korea has imported coaches and trainers from another communist country that once emphasized sporting achievements as a source of political achievement, East Germany. That country’s maniacal quest for gold led it to develop the world’s largest doping program, operated by the Stasi or secret police which involved administering performance enhancing drugs (PEDs) to more than 10,000 athletes. The East Germans specifically targeted women athletes after determining that the PEDs were particularly effective in women’s competitions, either due to physiology or less depth of competition in female events. In a paper forthcoming the Social Science Quarterly, Kevin Stahler and I estimate that at its peak, the East German doping program accounted for 17 percent of the medals awarded to women in the Summer Olympics, a share as big as the entire medal haul of the US and USSR squads at the 1972 Munich Games, the last Olympics not to be marred by widespread doping. Sadly, it appears that the East German coaches brought their pharmaceuticals with them, and the North Korean women’s soccer team has had sudden withdrawals of players from the roster, positive drug tests, and a goalkeeper punching a referee in the last several years. 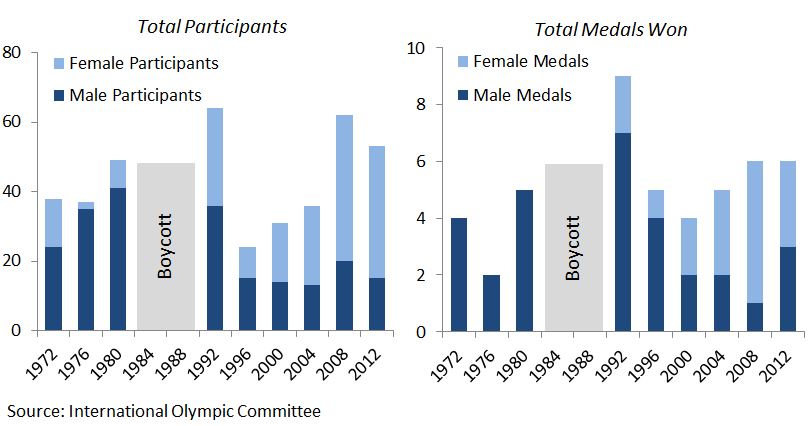 There is a large literature that statistically analyzes success at the Olympics in terms of country attributes such as size, level of income, home field advantage etc. As can be seen in Figure 2, which depicts North Korea’s predicted versus actual performance, North Korea used to significantly under-perform relative to the statistical norm, but in the last two Olympics has actually performed slightly better than expected.  In 2008, North Korea was expected to win 5 medals, but came away with 6, and in 2012 it again won 6 medals, when it was predicted to only win 4. 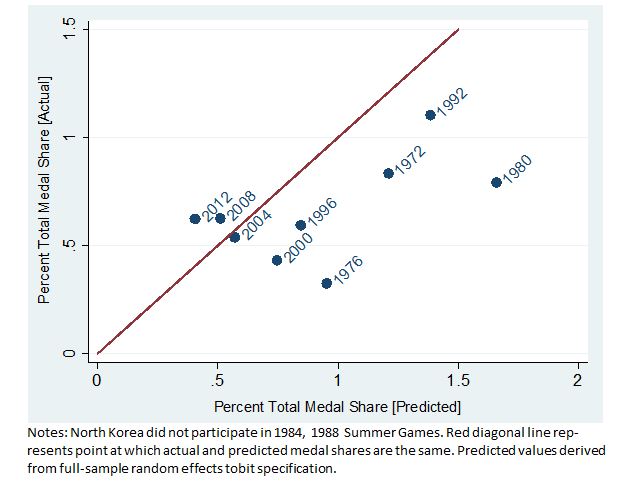 So what about Rio 2016? Our preliminary estimate is that North Korea’s predicted total medal share in 2016 is 0.48 percent, or 5 medals holding 2012 number of medals awarded constant. The actual medal share in 2012 was 0.62 percent, or 6 medals. The forecast would imply a loss from London, though we can see from the residuals above that in recent games the country has over-performed. So it would be safe to predict 5-6 medals for Rio. If North Korea comes away with say 8 or 9 medals, well maybe those guerilla tactics are working.