The next President of South Korea could spell major changes for inter-Korean policy. Despite splintering on the left, the candidates from the Minjoo Party have a significant momentum advantage going into the next presidential elections. Meanwhile, amid the Park Geun-hye scandal and subsequent impeachment, the Saenuri Party looks to be imploding as the anti-Park faction of the party appears poised to start a new party.

As covered in previous posts, the final Constitutional Court verdict on the legality of Park’s December 9 impeachment will determine whether she is permanently removed from office. If the court confirms the National Assembly’s impeachment vote new elections are required by law within sixty days. We could be looking at elections sometime as early as late Spring but possibly later. Given the North Korea policy positions of the major candidates, there is a good chance that we will see a major shift in North Korea engagement policy. Today we offer a short primer on the potential North Korea policies of the top six candidates as measured by the most recent Real Meter poll. 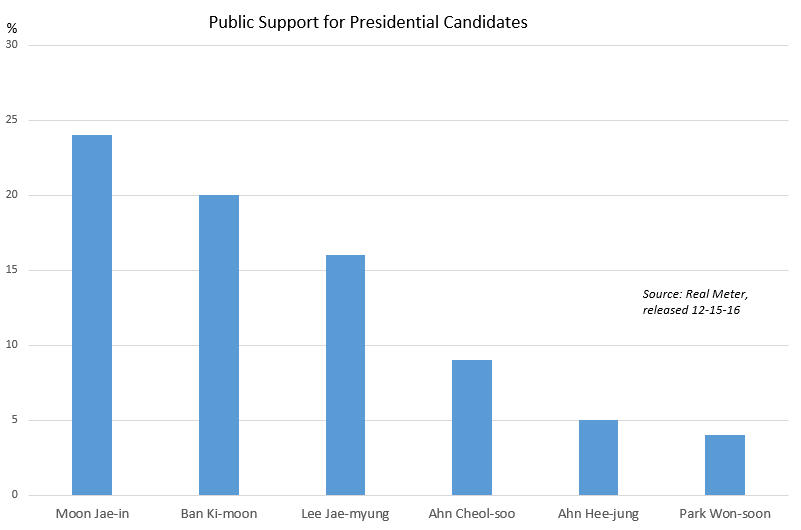 Moon has gone on the record many times about his North Korea policy as he ran for the presidency in 2012 and was former President Roh Moo-hyun’s chief of staff. Earlier this year Moon was embroiled in controversy after Roh’s former foreign minister Song Min-soon claimed in his memoirs that Moon supported consulting with Pyongyang through inter-Korean channels over whether South Korea should vote for a UN resolution on North Korea’s human rights situation. The Roh government ultimately abstained from the vote.

In a speech last year, Moon argued for increasing inter-Korean integration, repealing the May 24 measures, and supporting South Korean firms investing in the North. He argued that economic integration would be a boon to the South Korean economy. He has said he supports the US-ROK alliance but has called for “balanced diplomacy” between the US and China and argued that it is “inappropriate for the THAAD deployment process to go on under the current political circumstances, ” a clear nod to Chinese concerns.

Moon has argued for the immediate restart of the Kaesong Industrial Complex and stated that as president he would visit North Korea before the United States.

Ban has not formally declared his presidential run but upon returning to South Korea at the end of December will visit the living widows of former presidents and pay his respects at their graves. He has no party affiliation although it is suspected that he would take a center-right position, possibly joining the Saenuri Party. Ban was the foreign minister from 2004-2006 during an expansion of inter-Korean cooperation and aid.

As UN Secretary General he has regularly dealt with North Korean provocations at the international level and has been an advocate for increased sanctions and human rights advocacy. He is not a career politician nor has he recently addressed North Korea policy outside of his role as Secretary General.

Lee has made pro-engagement statements regarding North Korea and offered to meet unconditionally with Kim Jong-un. He has also been skeptical of THAAD deployment as well as strengthening ROK-Japan relations arguing that Japan should instead be considered a military foe.

In a Korean Peninsula Peace Forum talk he gave in October he criticized Park Geun-hye’s closing of the Kaesong Industrial Complex. He argued that sanctions against North Korea are hurting South Korea more. He called the current administration’s policy a “minus” North Korea policy, arguing instead for a “plus” policy of mutual gains.

Ahn’s first major comments on North Korea came in his 2012 book where he argued for expanded economic integration with North Korea and the potential of such integration for South Korea’s own economic growth, connecting “Busan (Ahn’s hometown) to Paris.” Nevertheless, he was circumspect on the Sunshine Policy acknowledging the controversies over giving North Korea too much and the pitfalls of lack of transparency in how the policy was implemented. He also seems to strongly recognize the importance of the US-ROK alliance.

In a piece for 38 North earlier this year John Delury argued that while Ahn has promoted similar ideas as the Sunshine Policy there’s debate over whether he would offer a policy more akin to “engagement lite.” Perhaps Ahn would lean a little to the engagement side of Park’s Trustpolitik plan but his words are measured and his rhetoric on North Korean engagement is not as grandiose as some of the other candidates coming from the left. Ahn and the People’s Party have vocally opposed THAAD deployment.

Ahn recently called Park Geun-hye’s current North Korea policy “pitiful” but acknowledged that from Kim Dae-jung to Park Geun-hye both the progressive and conservative governments have failed. He has noted the necessity of the ROK government to maintain a “posture for practical discussions [with North Korea].” He has criticized Lee Myung-bak’s focus on North Korea human rights issues while neglecting starving North Koreans.

Ahn has been critical of THAAD but has at other times equivocated: “It isn’t a questioning of supporting or opposing THAAD deployment. The core is how can we minimize military tension on the Korean Peninsula and East Asia and we should strategically judge what kind of influence it would have on affecting the security structure.”

Ahn has been less outspoken on North Korea policy than some of the other candidates so he is a bit more difficult to evaluate.

Park, at a North Korea Peninsula Peace Forum talk, summarized his plan with keywords “northern new deal,” “P-turn plan,” and “three-horse carriage policy.” The northern new deal concept represents the idea of using North Korea as a bridge into the rest of Eurasia, very similar to what Moon Jae-in has argued for, and a goal similar to Park Geun-hye’s Northeast Asia Peace and Cooperation Initiative (NAPCI) although ostensibly with fewer preconditions on North Korea. Like Moon and Ahn, he has argued that integration with North Korea would help spur the South Korean economy. Park criticized the current administration for being “fools or unpatriotic race traitors” for “squandering the opportunity to move north by weakening relations with North Korea.”

The “P-turn plan” concept suggests a policy shifting from pressure toward peace. The “three-horse carriage” concept means that the central government should establish guidelines and infrastructure for inter-Korean cooperation, local government should establish ties between cities in the South and the North, and civil society and private businesses should flesh out those plans. Park recently announced plans to establish a cooperative relationship between Pyongyang and Seoul, where he is the mayor.

This is a typical example of the distorted polls. We Korean people, especially conservatives do not believe this kinds of polls.

The Significance of Small Gestures: The Decision on Military Exercises