Slave to the Blog: the Pogues Edition 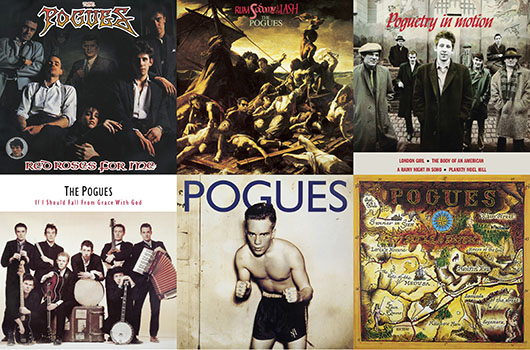 Well, you know it’s going to be a strange week when Steph Haggard sends you an email saying you’re our go-to guy on LGBT issues and you end up doing a blog post revolving around an Irish band from the 1980s. This all was prompted by an odd little NK News story (more below) on the existence (or non-existence) of gay culture in North Korea. One bit involved 10-year army conscriptions in remote mountainous areas and “pretty boy privates.” Reminded me of the apocryphal remark attributed to Winston Churchill, who encapsulated British naval traditions as “rum, sodomy, and the lash.” Sounds like the KPA has been following similar traditions in the mountains of Yanggang province. Anyway, "rum, sodomy, and the lash" was also the title of the second Pogues album, and that thought inspired me to conjure up a Pogues-themed STTB to revisit  some recent stories of interest.

Peace and Love: An ongoing story in South Korea is President Park’s reported annoyance with her predecessor Lee Myung-bak’s revelation in his memoirs that North Korea demanded 100,000 tons of corn, 400,000 tons of rice, 300,000 tons of fertilizer as well as asphalt pitch worth US$100 million and $10 billion for a summit. The “pay-to-play” aspects of North-South summitry have been an issue going all the way back to the first summit between Kim Dae-jung and Kim Jong-il. Apparently President Park is concerned that news of extortionate demands will make it more difficult for her to reorient inter-Korean relations. Representative Ha Tae Kyung has gone so far as to recommend that the memoirs be retracted, and suggested that Lee may be in violation of South Korean laws against the disclosure of diplomatic secrets.

If I Should Fall from Grace with God: As noted in a post from October, in response to the Ebola virus outbreak North Korea has banned tourism and instigated a three-week quarantine.  While the quarantine has been applied selectively (Jim Clapper and Russian oligarchs are apparently exempted), one track two meeting of which I was aware was scuttled when the potential participants were informed that they would indeed be subject to the quarantine. One China-based tour agency claims that the tourism ban will soon be lifted, but the national taekwondo federation has announced that they are backing out of hosting two international tournaments, citing ebola concerns.  And here is where the going gets really weird: I’m corresponding with someone stuck in North Korea for three weeks under the quarantine.  It must really suck: you’re so bored that corresponding with Noland is a viable recreation option.

Thousands are Sailing: Back in November I commented on the case of a teenager going by the pseudonym Han Song who turned up in Sweden seeking asylum speaking ungrammatical Korean with a thick North Hamgyong accent. The working hypothesis of the Swedish authorities is that Han is actually Chinese, and last month turned down the asylum request. The case is a mess. According to the Citizen's Alliance for North Korean Human Rights (NKHR), a Seoul-based NGO, which has taken up Han’s case, Spraklab, the private firm hired to interview Han and on the basis of a linguistic analysis determine from where he likely came, conducted an unprofessional and incompetent analysis, and indeed, according to reporting in the Joongang Ilbo has been censured by Britain’s supreme court for providing “wholly inappropriate” opinions to asylum tribunals.

NKHR is asking that if the Swedish authorities do deport Han, at least they send him to South Korea rather than China where he may well be deported to North Korea, where he could face imprisonment, torture, and abuse. The Swedes say that if he is not Chinese, then the Chinese won’t accept him, and if after four years no one can prove his identity, “he will probably be allowed to stay in Sweden on humanitarian grounds.”

Summer in Siam: Steph’s still all in a lather about The Interview, in the meantime, North Korean diplomats in Myanmar and other locations have been instructed to go down to the local market and make sure no pirated copies are available for sale. (I wonder why USTR never thought of this approach to IPR enforcement?) Back in Pyongyang, the Foreign Ministry accused the Berlin Film Festival of “instigating terrorism” by screening The Interview, except…The Interview wasn’t programmed at the Berlin Film Festival. (If this were an SNL-themed STTB rather than a Pogues themed one, at this point I’d cue up Gilda Radner doing Emily Litella…"Nevermind.")  Oh, and I know that Myanmar isn’t Siam, but its next to Siam, ok?

I’m A Man You  Don’t Meet Everyday/Streams of Whiskey/The Sick Bed Of Cuchulainn: I had to reach for that Summer in Siam reference, but the problem with this next story is not finding a Pogues reference, but choosing among them: given Pogues frontman Shane MacGowan’s well documented problems with substance abuse, it is perhaps not surprising that half the Pogues catalog evokes associations with Dennis Rodman. In case you missed it, the Worm is back, with a documentary at Slamdance in which among other things, he invites Seth Rogen to join him in Pyongyang, and reminds us that he is not Martin Luther King (as if anyone is confused on that point).

Sayonara: While Pyongyang appears to be seriously angry about The Interview, Martyn Williams’s totally awesome North Korean Tech blog reports that on another front they can relax: the Internet-funded North Korean coup campaign has folded, having only raised about a hundred bucks.

Rum, Sodomy, and the Lash: I’m never going to top this so I will just quote the NK News “Ask a North Korean” column from last week (sorry, behind a paywall so no hyperlink):

“Personally, I never knew anyone who was gay in North Korea, but I’ve heard a lot from grownups about things that happen in the military.

That’s why senior officers have been known take charge of “pretty boy privates.” Some of them might have been gay. But others may have done so not because they were gay but because they didn’t have any women around for so many years.”

Well, I am tempted to advise young recruits that if your captain comes skulking around the barracks late at night, just look him in straight in the eye and say “pogue mahone!” (and hope that he doesn’t speak Irish).

As far as I can tell, there is zero relationship between the Mansfield project and And the Band Played Waltzing Matilda, but it’s a great performance of a great song: