The Sinuiju Zone and the Tin Ear Problem

North Korea has rolled out a new investment promotion effort for the Sinuiju International Economic Zone. With an estimated 20,000 or more North Koreans already working in Chinese sister city Dandong and attempts at formal integration foundering, the relevant economic question is “so what?” Can the effort to attract foreign direct investment through opening new zones offset the multiple reputational problems the regime unknowingly puts in its own way?

The investment promo document can be found on North Korea's Naenara portal (third picture from the bottom on the right labeled “신의주국제경제지대”; if you click the picture, it opens a .pdf file in Korean, English [starting on page 17], and Chinese; Korea Times coverage here).

Because of its position opposite Dandong, Sinuiju is a much more logical place for an economic zone than Rason, and the pitch emphasizes its locational advantages as a hub that connects with the other zones. 14 SEZs were rolled out in 2013 and 6 more in 2014, possibly reflecting efforts of provincial and local officials to get on the bandwagon; Andray Abrahamian and Geoffrey See provide the best introduction.  The Sinuiju effort appears to cover the entire city, which has a population of about 250,000, about a tenth of Dandong’s (see planning map below). 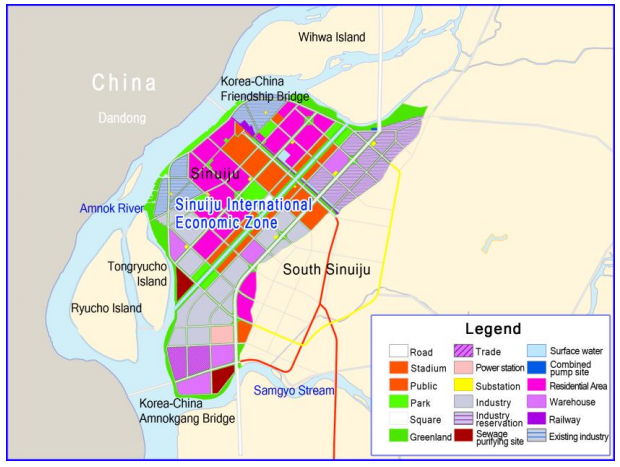 The basic question is whether any of the assurances on offer will have effect with foreign investors, an issue addressed in a post by Marc Noland in October. The tin ear elements in the document are jarring. One of the “five charms” of investing in the zone is a “positive foreign policy and the stable political environment.” Apparently, nuclear and missile tests are not seen as relevant to investor sentiment given that “the DPRK is the best socialist system centered on the populist masses” and with Kim Jong Un at the center “is absolutely stable...”

A long section on “legal circumstances” outlines a standard set of investment incentives: 50 year land leases; low corporate income tax rates (14%); additional incentives for investments in favored sectors; and the possibility to transact in foreign currencies and to settle disputes through foreign arbitration bodies. The section of the document devoted to infrastructure implicitly acknowledges the centrality of this problem with an impressive set of plans and mentions access to telecomm and that “internet will be connected to Pyongyan-Sinuiju network.” But what does that mean? Are the legal promises worth anything given the track record? And does North Korea have any interest in investing in needed infrastructure given its military and other priorities?

Tony Michell, a consultant with experience both in North Korea and with export-processing zones more generally, noted in a private communication that many of the world’s thousands of economic zones are actually fallow, and that it typically takes some as much as five years to get running. But as the long-standing saga of the Hwanggumphyong and Wihwa Islands Economic Zones demonstrates, the headwinds are particularly strong. One problem is that location may actually be a disadvantage given that the pair of cities straddling the Yalu—Sinuiju and Dandong—present a virtual natural experiment in the effect of institutions. Chris Green at Sino-NK provides a fascinating review of the evidence about investment in Dandong using North Korean labor, including particularly the work of Kang Ju-won, a South Korean anthropologist who has documented the political economy of the city (in his book Today, I am making and breaking borders: a cultural anthropological guide to reading the border city of Dandong  [나는 오늘도 국경을 만들고 허문다: 국경도시 단둥을 읽는 문화인류학 가이드], and a collection of articles that appear in Korean on the digital media website Pressian).

The findings? There may be as many as 100,000 North Koreans in China’s Northeast provinces and 20,000 in Dandong alone. Not only are Chinese firms actively taking advantage of this population but South Korean firms appear to be subcontracting with them too, effectively circumventing the May 24 sanctions. At Sino-NK in October, Adam Cathcart and Chris Green argued that the Dandong connection may have regressed somewhat, perhaps for political as well as economic reasons. But the main point is that even for Chinese investors—let alone South Korean ones—why bother with the risks of operating in North Korea when you can take advantage of its labor on the Chinese side of the border with much superior infrastructure and access to a working financial system? In excellent sleuthing for SinoNK, Theo Clement suggests that some of the tourism zones might eventually come to life because of Chinese investor interest. But the low production values of this recent document reflect the underlying problem: that the government doesn’t really understand the full range of political as well as economic factors that deter investment in North Korea.

Thanks to Curtis for posting these; for readers interested in following the thread on the Sinuiju Zone, North Korea Economy Watch has good archives on the issue.