From Russia with Love (An Addendum)

China reported zero exports of crude oil to North Korea throughout the entirety of 2014; we have not seen more recent trade data but we assume the so-called embargo is still in effect, at least on paper.

As we argued last year, it is impossible to tell what is actually going on. While there were scattered stories about fuel shortages, most analysts find it highly unlikely that China shut the spigot off completely; even Chinese officials deflect any talk of an embargo, instead stressing that trade is “normal”. This amounts to a potentially large missing value in China-DPRK trade data. For instance, taking the 2014 numbers at face value, China reported a slight decrease in total exports to North Korea for the first time in years, which we earlier interpreted as a sign of cooling relations. But if we also factor in a “business as usual” scenario for oil shipments no longer recorded in the trade data, this would amount to $430 million in additional exports from China and a nine percent rise in total exports from 2013 (Figure 1). 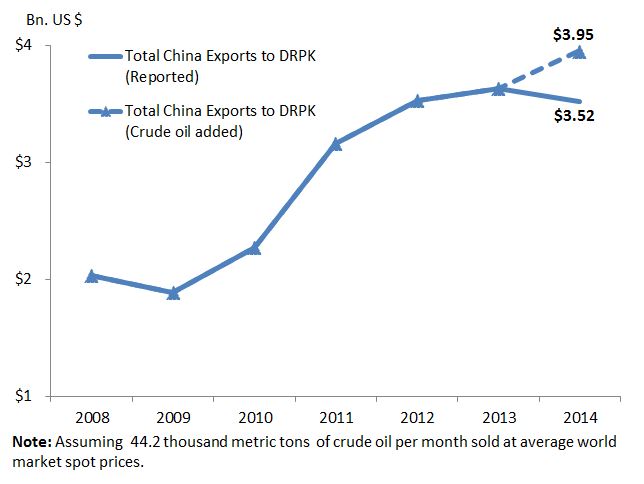 If true, the “business as usual” scenario raises further questions. China’s imports from North Korea certainly did sag last year on the back of large declines in the price (and—to a lesser extent—volumes) of traded commodities like coal and iron ore, implying a significantly wider bilateral trade deficit than reported. As North Korea finds it harder to finance what it buys from China by hawking resources alone, the question remains as to how long trade growth can sustain itself given a roughly half-billion dollar annual fuel bill.

But what if there were was a seed of truth to the embargo, and what if North Korea had found an alternate fuel source from a new-found friend? In addition to a pending natural gas pipeline deal, Radio Free Asia reported in March that Russia is expected to ship 500,000 tons of oil to North Korea this year, by sea or via pipelines that run through China. The quantity cited is suspiciously close to the average annual volumes that China shipped to the North in the years before 2014 and, if true, could imply a complete supplanting of energy dependence from one partner to the other. What’s more, apparently the North Koreans are getting the oil through “favorable loans”, which answers how they are paying for it in a post-commodity super cycle era (I.e., they’re not, and probably won’t). The RFA report fits nicely into the overall narrative of growing Russia-DPRK cooperation, but it is hard to take the claims of this anonymous source from North Hamgyong at face value: there are a number of logistical issues related to oil delivery and refinement if North Korea suddenly shifted most of its imports to Russian oil, namely that there is currently no pipelines connecting the two countries directly.

Reality is most likely somewhere in the murky middle. In November 2014, a South Korean intelligence official stated that North Korea had imported less than 100,000 tons of oil from Russia that year, a significant expansion but still far shy of normal supply volumes from China. Moreover, in January 2015 NK News ran a piece that tracked the maritime movements of North Korean oil tankers in the region. They noted marked increases in Russia-DPRK traffic from August 2014, but also observed that modest traffic between North Korean and Chinese ports continued. In other words, the oil trade may no longer be business as usual with China, but North Korea could be more than making up for it by taking advantage of Russia’s “Year of Friendship”.

When Will Russia-China Trade Hit the $100 Billion Mark?