On Monday, we reported on some interesting new work by Nick Eberstadt on North Korea’s balance of trade. The two headline findings were that North Korea’s trade with the world outside of China and South Korea has shown a secular decline, and that this rest-of-world trade is essentially balanced. On the other hand, it appears that China is the only partner with which North Korea is currently able to run a sizable trade deficit.

Eberstadt draws his conclusions by combining China trade data from UN Comtrade, North-South trade from the Ministry of Unification, and rest-of-world trade from the Korea Trade-Investment Promotion Agency (KOTRA). In our view, this is probably the best choice of data sourcing. As we will show in this post, KOTRA is actively correcting for some significant trade-reporting errors. However, even KOTRA cannot be taken as gospel truth: it is ultimately relying on data shared among the multilaterals, including the UN’s Comtrade and the IMF’s Direction of Trade Statistics (DOTS) which—to put it bluntly—can be a mess when it comes to North Korea. 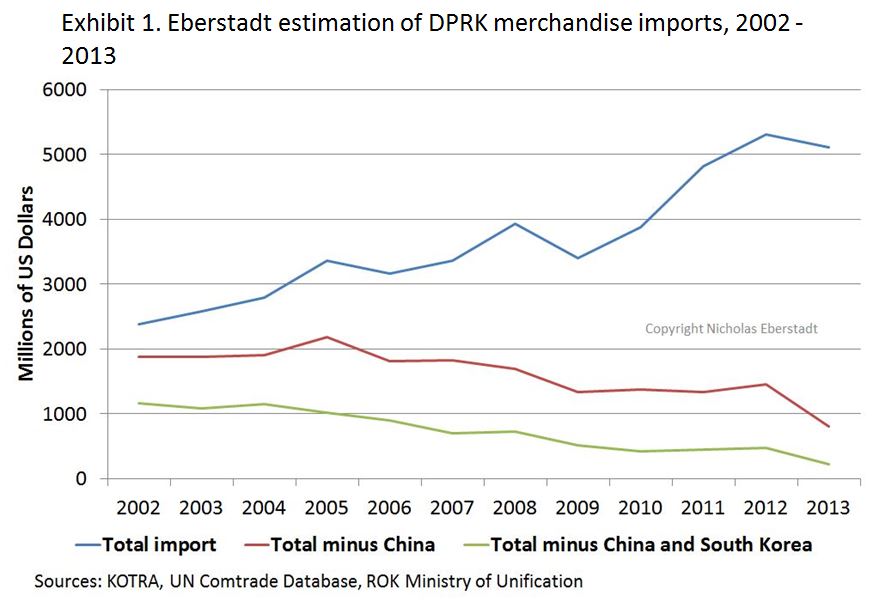 Then we do the same exercise using IMF Direction of Trade (DOT) data for North Korea’s “rest of the world” trade:

Reported trade looks broadly similar in some years – in 2012 the discrepancy on  total imports is less than $ 1 billion. However, trends in the 2000s are highly disparate between the two sources, and DOTS would imply imports were roughly double what KOTRA records in 2008. (One major contributor is the anomalous recording of $1.6 billion in imports from Algeria that year, a number that is nowhere near what is recorded in UN Comtrade or KOTRA.) The sources of the discrepancies are multiple, many rightly corrected by KOTRA but others in which the KOTRA adjustments may or may not be entirely warranted.

Let’s start with the obvious DOTS/Comtrade errors by focusing on a year with the most egregious discrepancy: 2008. According to UN Comtrade, Brazil, Peru, and South Africa all report selling hundreds of millions of dollars worth of iron ore, coal, or copper to North Korea. This seems strange, considering that North Korea has revealed comparative advantage in coal and iron ore and is unlikely to be importing such commodities. However, South Korea is a large buyer of these inputs. Therefore, a logical conclusion is that some of these countries, at any number of steps in the trade reporting process, are confusing real South Korean imports with North Korea. One way to check this would be to look at what countries report exporting to the two Korea’s versus what South Korea reports importing. Two selected instances below provide strong circumstantial evidence. 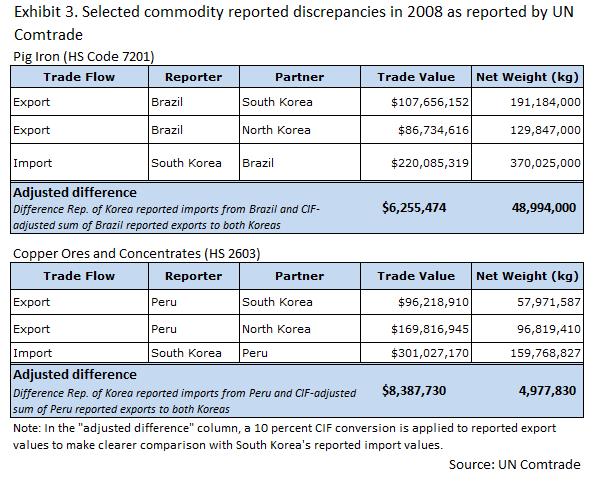 In both cases, Peru and Brazil’s combined exports to both Koreas roughly sum to what South Korea reports importing of the selected commodity, with only a six to eight million dollar discrepancy. However, these are cherry-picked examples. In other cases, it is much less clear if countries are simply mixing up their partner’s names.

Take the curious case of India. A while back we reported on a mysterious surge in India-North Korea trade which peaked in 2008 at over $1 billion in reported Indian exports. While UN Comtrade, DOTS, and the Indian Department of Commerce report this surge in roughly the same magnitude, KOTRA only reports $53 million in Indian exports to the DPRK that year. So, who do we believe? Considering most of these reported imports were in jet fuel and chemicals used in the production of manufactured goods like rubber and cement, this would appear to be plausible. In our post, we also outlined a logical political-economy explanation, tracked down by a Forbes reporter. However, when you apply the same exercise as Exhibit 3 above, these values start to look questionable. Indeed, South Korea reports importing almost $ 4 billion in petroleum products from India that year, far more than India reports exporting to North Korea ($772 million) and South Korea ($1.6 billion) combined; this could imply a wide range of reporting discrepancies, including mistaking South for North Korea on India’s side.

The chief takeaway is that KOTRA is about as close as you can get to accurate statistics on North Korea’s trade (just remember to add South Korea! ). However, even KOTRA’s methods cannot be taken completely at face value: the case of excluding India’s recorded values in 2008 may or may not have been justified. IMF DOTS and UN Comtrade can also be useful for recording specific country and commodity values through properly adjusted mirror statistics, but not necessarily for aggregated annual trade.

But it is possible that North Korea enjoyed a brief period at the end of the 2000s when it was trading a little bit more with the rest of the world. Things then went sour. A possible political explanation that fits the data is that the Six Party Talks process appeared to be making progress in 2007-8 after the shock of the 2006 test, but the missile and nuclear tests of 2009 and the annus horribilis of 2010--the Cheonan and Yeongpyeong-do shelling—isolated North Korea, added sanctions and set in train a more general North Korea fatigue. Given the lack of transparency, including not only with respect to North Korea but on the part of important trading partners like Iran, we simply can’t know for sure.

I wonder if the South Koreans get madder at being confused with the North, or vice versa?

Thank you for bringing this out - always one of the most interesting trends to watch. Also interesting to see that even though DPRK is attempting to diversify its trade partners, it is now more dependent than ever on just two trade partners - China and "the village to the south". While the uptick is likely (a tiny bit of) good news to the average North Korean, there's no evidence to conclude that parallel development/byungjin nosun is to thank/blame.

Did China and South Korea Just Kiss and Make Up?

Is China Changing Its Views of North Korea: Some Evidence