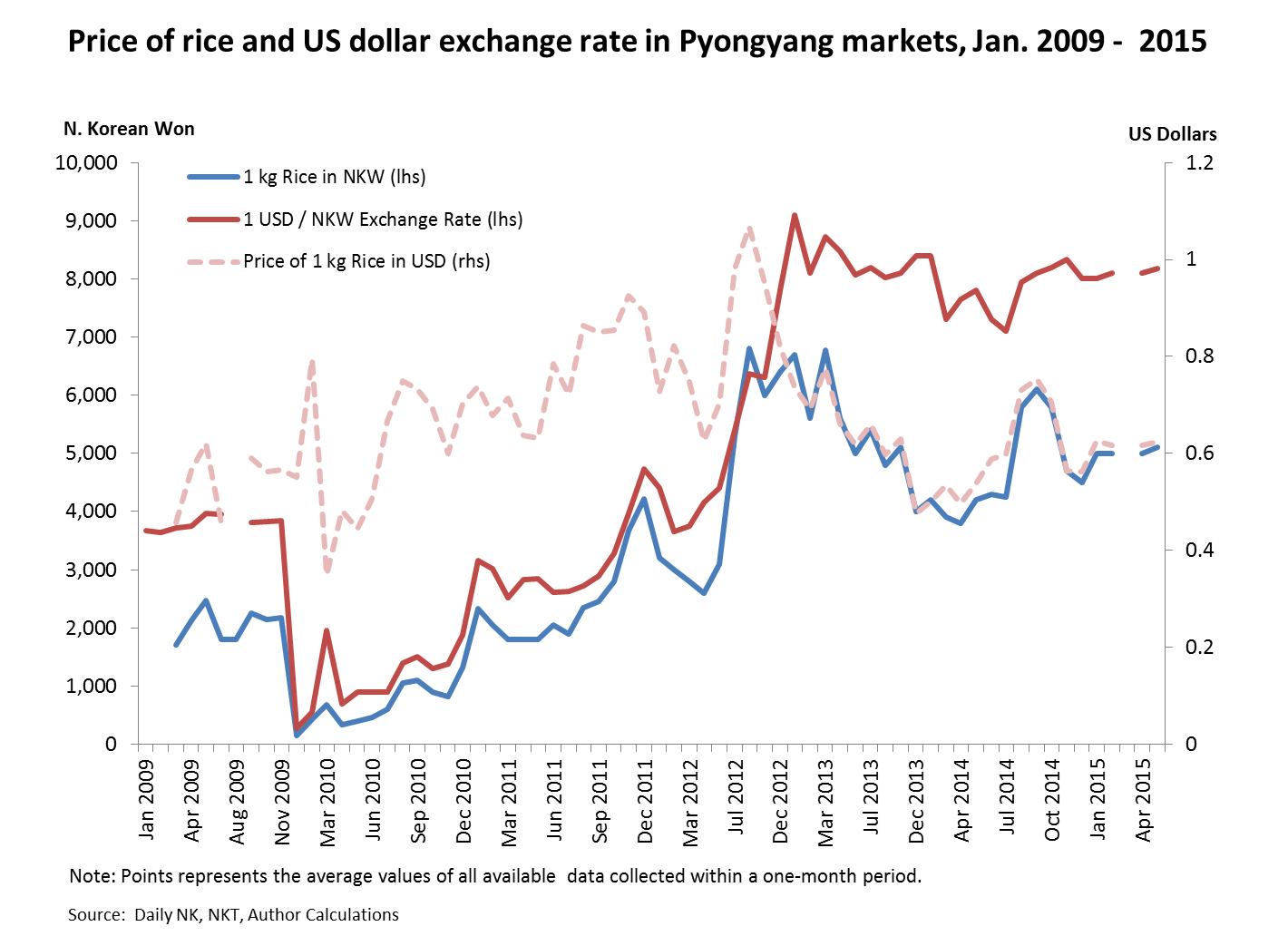 As an economist, I would expect the developments discussed yesterday, if significant, to manifest themselves in prices. But when one looks at rice prices, either in US dollar or North Korean won terms, they appear relatively stable, at least through last month.

Admittedly, there could be distributional effects at play so that the price of a less preferred staple like corn might be rising relative to rice and hence the rice price might be a misleading indicator of distress among poorer people. And it is quite possible that if the seasonal rains do not materialize then prices could spike rapidly as they have done in the past. But at least today, it is hard to argue that the price data are consistent with an emerging food crisis. Indeed, New Focus International, which generally takes a fairly dim view of developments in the North, reports that the low rice price has contributed to a proliferation of porridge sellers (although the paper adds that movement into the porridge business reflects weak conditions in textiles and apparel).

But let’s suppose that the rain doesn’t come, the harvest is poor, and food prices rise. Could North Korea experience a famine on the scale of the 1990s?

The answer is almost surely “no.” For one thing the economy is simply more flexible now than it was during the famine period. Specifically, farmers have been allowed to trade grain, so one would expect more trading and less hoarding. Similarly one has to expect that the internal market would distribute supplies more effectively now than it did 20 years ago. And there is greater capacity for imports as well.

That’s on the supply side. On the demand side, one has to believe that few if any North Koreans have the same expectations with regard to state behavior that they did in the 1990s, when aid workers told of urban residents literally starving in their apartment buildings waiting for promised public distribution allotments to arrive. The coping behaviors that developed during the famine period are now widely ingrained as is distrust of the state. People would begin to act much more quickly this time around.

And finally, for all its opacity, the outside world is much better informed about North Korea than it was 20 years ago. The international humanitarian response would be more rapid and forceful. South Korea, in particular, has an ongoing agreement with the WFP which could facilitate a rapid ramping up of relief, an arrangement that did not exist in the 1990s.

That said, we should not relax. As Steph Haggard and I argued in our book Famine in North Korea: Markets, Aid, and Reform, what started out as a “socialist famine” where access to food was determined by political status, evolved into a more conventional famine in which the ability to command resources in the marketplace determined access to food. So today food shortages and rising prices will hurt—and potentially kill--those least able to pay. It is quite possible if the rains don’t come some North Koreans will die. But it would take mismanagement of biblical proportions to turn the current situation into a famine.