There has been a steady stream of North Korea-China trade stories this year, the more bizarre of which we recently reviewed. However, two developments deserve some follow-up as they could reflect important new trends in the relationship: North Korea’s coal exports are retreating, while textile-related exports are making substantial gains.

Anthracite (ie. coal) has been the defining component of North Korea and China’s recent trade relationship. North Korea began shipping large quantities to China concurrent with a post-2009 spike in world prices, and a period in which coal-fueled industrial growth was pursued relentlessly by Chinese producers (Exhibit 1). By the time North Korea’s anthracite exports to China reached their height in 2013, it had replaced Vietnam as China’s primary import source. 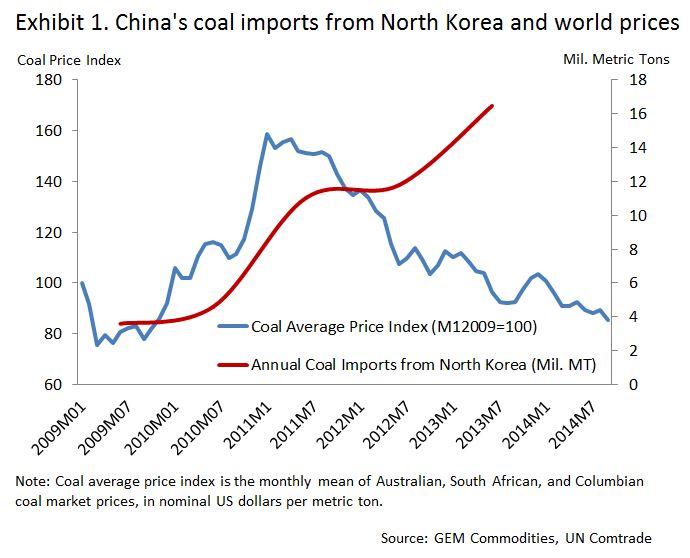 However, this year North Korea’s anthracite exports to China are on course for a hard landing. The total value of imported anthracite is down 23 percent in the first half of 2014 compared to a year earlier (Exhibit 2). That’s an annualized $340 million hit to North Korea’s balance of payments. But North Korea is not alone: China has seen a double-digit decline in both the value and volume of its total world coal imports from January - August 2014. 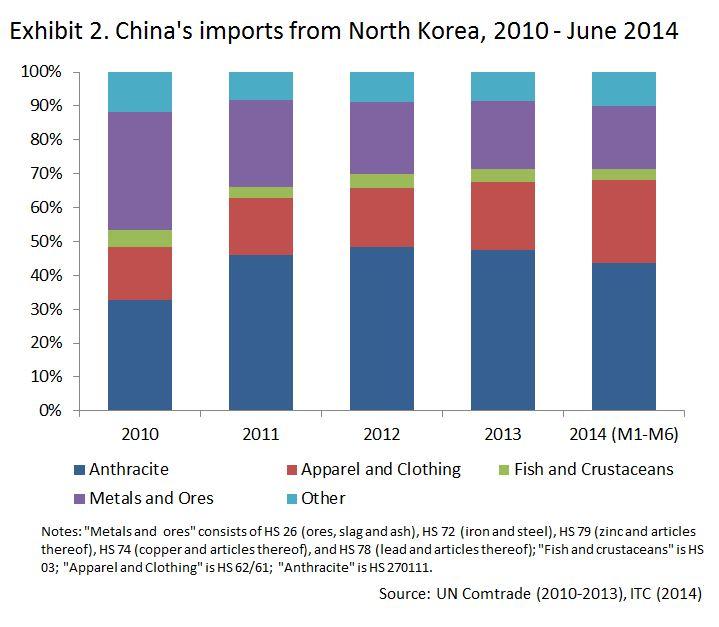 This trend has little to do with geopolitics or any vagaries of the China-North Korea relationship. Rather, this is a story on the Chinese domestic market side-- and it is no temporary aberration. As my colleague Ryan Rutkowski explains, Beijing is making a concerted effort to shift away from its dependence on coal, especially of the imported variety. Chinese regulators reinstated a tariff on the import of coking and thermal coal last week (the tariff on anthracite specifically looks to be 3 percent). This is partly due to environmental concerns, and partly to protect China’s own coal mining industry which is buckling under falling world prices, weak asset returns, and high debt. But it is also because that insatiable demand simply isn’t there anymore: China’s energy-intensive industrial output is decelerating, with emphasis being put on growth in the services sector. In short, the North Korea-China coal trade has most likely already seen its brightest days.

However, a drop in anthracite exports has not meant a corresponding decline in North Korea-China trade. Total trade is almost exactly where it was in the first two quarters of 2013, due in large part to a rapid expansion in the DPRK’s exports of apparel and clothing (Exhibit 2). Knitted and non-knitted textiles and accessories have expanded 43 percent from January-June 2013 to 326 million dollars.

On China’s side, there has also been a rise in textile-related production inputs like wool, cotton, and various man-made fibers and filaments which are exported to North Korea (Exhibit 3). This tight relationship between raw inputs and finished outputs is more evidence that the Chinese have stepped firmly into the processing-on-commission void created when the South Korea’s post-Cheonan measures decimated inter-Korean trade except via the Kaesong Industrial Complex.  (Keep in mind, however, that a portion of this trade could be Chinese middlemen working for South Korean firms that are repackaging these textiles as “Chinese” to avoid South Korea’s sanctions.) 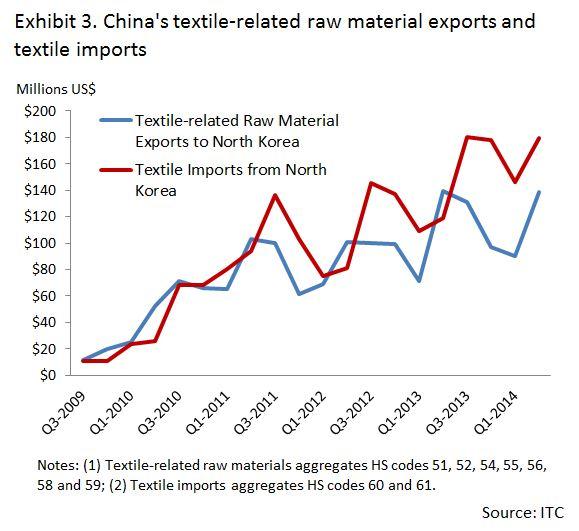 A surge in textile trade may be highly consequential, but not necessarily all that new. A number of countries, including notably Japan, imported large quantities of garments from North Korea throughout the 1970s and 1980s before the industry took a nosedive. Instead, this is a return to natural form for North Korea based on a specialization in low-to-medium skill labor-intensive goods. China’s shift from pure resource extraction to utilizing North Korea as a low-wage manufacturing hub is also intuitive given a growing scarcity of labor and the fact that North Korean worker’s wages are about half of their Chinese counterparts in Jilin. This is not unlike the trade and investment trends taking place between China and its poorer South-East Asian partners.

With only a half year of new data, we will have to wait to see how firmly these trends take hold. Significant reductions to China's coal consumption will not come overnight; anthracite is  – and will continue to be – a dominant moneymaker for the North Korean regime. If anything this year has been a lesson in the dangers of an over-reliance on a single foreign market, and a single commodity subject to major cyclical and secular swings in price, to sustain a small developing country’s external financing. But the simultaneous rise in the importance of textile trade is also evidence of the continued strength of the China-North Korea trade relationship. Where one door swings closed, another opens.

This is great! An outstanding analysis of bilateral trends that should (but all too often don't) take into account China's broader position in the global world trading system, as well as North Korea's historical position in regional economic networks.
The takeaway: Sino-NK interactions (I hesitate to use the word "relations" as this type of thing embraces public and private links and transactions) are not as bad as you might think.

As my primary "expertise" is with regards to tourism, I would point out that if a 23% drop in coal exports represents a "$340 million hit" to the DPRK, doesn't this show that tourism is a pretty minimal contributor to their foreign exchange earnings, and by extension of some writers, to the development of their nuclear capabilities? Isn't it possible that the modest "good will" that foreign tourists and other foreign visitors to the DPRK generate may be worth the modest cost? It at least offers a positive, although slow, parallel track to the "give up your nukes or we won't talk" policy that we have so unsuccessfully followed for several decades now.

The "push" in production of modern textiles you can see with your own eyes in Pyongyang.
Women are extremely chic, wearing fitted costumes and walking on high heels under their embroidered sun umbrellas. Really cute.

Yes, energy conservation is on top of the economic agenda. And: Switching to green energy.
In Kaesong, on every balcony in the quarter of the high rise buildings you see solar panels. A funny picture: Each household has its own panel.

Hi Walter - That makes great sense. And now that DPRK themselves closed the door in a fit of Ebola-inspired panic, the resulting magnitude and direction of USD-KPW exchange rate should tell us how important tourism is to DPRK's hard currency situation, I think it'll also give us some second-hand insight on center-province dynamics. Most importantly, like you say this should help inform our policy.
DPRK is effectively sanctioning itself; hard to image a sanction being more effective than the host country enforcing it, right?

The Price of Oil, China, and Stock Market Herding