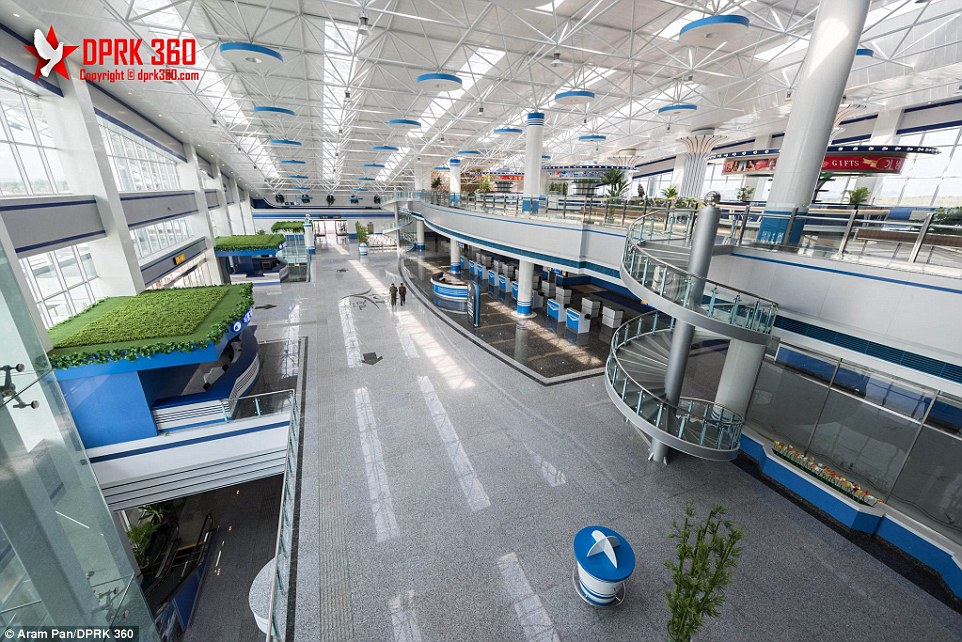 Last week North Korea opened Kalma Airport, a remodeled and  modern-looking facility in Wonsan on the east coast. Daily Mail reports that about thirty passengers were on the maiden voyage. (Photos come from Aram Pan of DPRK 360, who was on the flight and whose previous work we have viewed with some skepticism; his work tends to celebrate North Korea's socialist monumentalism). The airport is scheduled to open to regular traffic in November of this year with a reported capacity to handle 2,000 passengers daily; depending on the size of the aircraft this could be 10-40 flights a day.

Along with the Pyongyang International Airport terminal, this is the second major overhaul of a North Korean airport to be completed within the last three months. Kim Jong Un criticized the designers of the Pyongyang International Airport remodeling effort for failing to incorporate Juche ideals into the architecture. Is the Kalma Airport too modern for its own good?

The Kalma Airport was previously used as a military base. The goal of remodeling the airport is clearly to expand international tourism investment in the Wonsan-Kumgang Tourist Zone, a theme outlined in Kim Jong Un’s New Year’s address. According to Google Maps, the airport sits just a 34 minute drive from the Masik Ski Resort and 2 hours and 17 minutes from Mt. Kumgang. And there are other areas along the Wonsan Tourism belt stretching down to Kumgang where the North Korean government is actively soliciting investment. 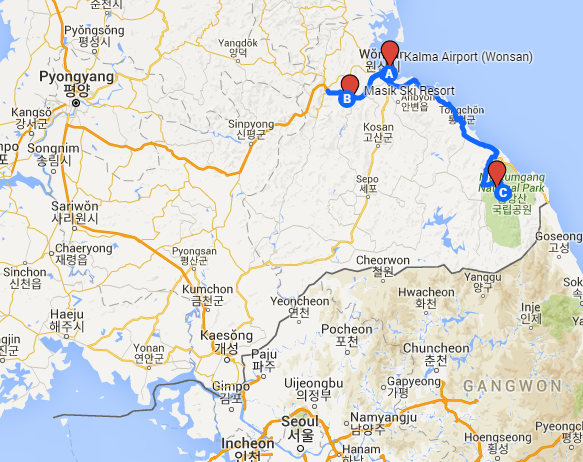 The airport was purportedly refurbished with assistance from a Hong Kong architecture firm at an estimated total cost of $200 million, even though soldiers were involved in construction. One of the joint slogans from the Korean Worker’s Party and Central Military Commission announced last February was “Let’s actively push forward the economic development of the Wonsan-Kumgangsan Tourist Region!”

Building an expensive modern airport sends a costly signal to investors that the North Korean government is committed to the economic development of the region. Such a signal could be welcome news to investors disillusioned by the (anti) business climate in North Korea and the poor state of infrastructure.

But $200 million is a lot of money, and as a result carries very high opportunity costs. This could be a field of dreams investment that opens new opportunities. But it’s entirely possible that the Kalma Airport is another prestige project, effectively doubling down on the Masik Ski Resort. Another possibility: with South Korea hosting the 2018 Winter Olympic Games is this a "me too" gesture or perhaps even an effort to squeeze out a last-minute joint hosting arrangement that brings an event or two up North.

If the airport is providing a gateway to Mt. Kumgang--most likely for Chinese tourists--then conflicts with South Korea are likely to follow in its wake. Lee Myung Bak shut down North-South Mt. Kumgang tours in 2008 after a South Korean tourist was shot by a North Korean soldier for wandering too far off the beaten path. South Korea, and particularly Hyundai-Asan, had paid for the lion’s share of investment in Kumgang up to the time it was shuttered. In order to restart the tours, the South Korean government demanded an apology and assurances about the future. When the South held firm on these conditions, the North ultimately expropriated the property, and even offered to open it up to outside bidders. Needless to say, there have not been many takers given the uncertain legal status of the property.

Could this change? In light of the recent August 25 agreement where the DPRK expressed regret over the DMZ mine incident, a North-South agreement over Mt. Kumgang is one possible next step. And if such an agreement were forthcoming, then Chinese and North Korean tourists could enter via the Wonsan gateway.

But getting South Korean tourists back to Kumgang would necessarily reopen the apology-assurance question and require Park Geun Hye to lift or alter the May 24 measures that forbid South Koreans from entering North Korea. She is pushing the edge of these restrictions with the Russia-North Korea-South Korea coal shipping pilot project, but we have a hard time seeing those restrictions relaxed with respect to an expropriated property.

Lastly, we should look at the “civilianizing” of the Kalma Airport in light of Kim Jong Un’s byungjin policy of simultaneously expanding military capacity and pursuing economic growth. Two months ago the Rodong Shinmun and NK Econ Watch reported that Kim Jong Un visited the Wonsan Kalma Airport for an air force demonstration replete with fighter jets and thousands of soldiers marching. This is the sort of dual use that may not be sending the investment-friendly message.

Carrots vs. Sticks: Global Asia on the Logic of Engagement