In some interviews after the missile test last month, I mentioned in passing that North Korea had featured its missiles on postage stamps.  The reporters were invariably surprised.  Our man in Seoul, Jaesung Ryu, has rounded up images of several of these stamps as shown below. 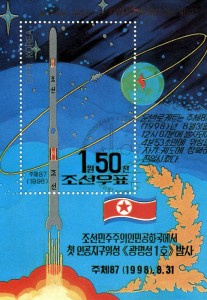 Apart from the sheer curiousity aspect, the stamps speak to a deeper point usually ignored in commentary on North Korea: the more the regime elevates its missile and nuclear programs (the latter has its own postage stamps), the harder it becomes to negotiate away these accomplishments. This is particularly the case if the accomplishments are not simply praised, but presented as the justification of and reward for decades of deprivation and sacrifice. 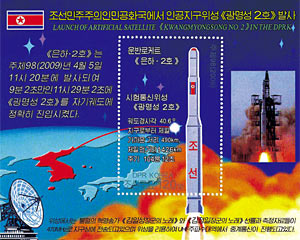 That the surrender of the family jewels would  be to foreigners whom you have spent decades demonizing would seem to make such an outcome even less palatable.  Each time the regime puts out one of these postage stamps, or erects another billboard extolling its nuclear and ballistic accomplishments, it raises the internal political costs of  changing course and reduces even the further the eroding likelihood of successful international negotiations over  its weapons of mass destruction and their delivery systems. 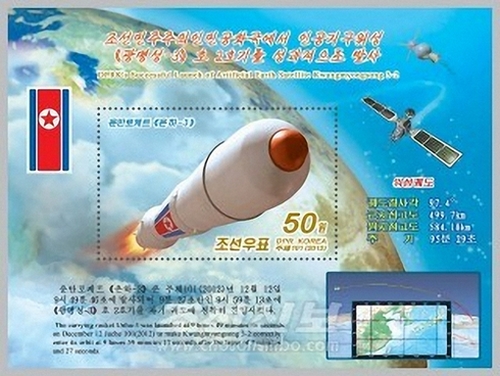 Jaesung's stamps possibly make another important point as well.  Assuming that the stamps all deliver the same service, their denominations can be read as information on inflation.  (Its been a while since I posted a letter in North Korea; maybe someone more experienced can help us out on this point.) The first stamp, from 1998, is for 1.5 won.  The second, from 2009, appears to be for 120 won. At the end of that year, the country experienced a currency reform that in theory should have reduced the price level by a factor of 100--i.e. a postage stamp should have cost 1.2 won.  But the most recent stamp, from 2012 is for 50 won.  Assuming that the stamps all deliver the same service, the increase from 1.5 won to 120 won over the period 1998-2009 implies an annual rate of inflation of about 50 percent.  The nominal decrease from 120 won to 50 won between 2009 and 2012 actually represents a large price increase once the November 2009 currency reform is taken into account.  If one assumes that the 120 won stamp was issued in July 2009 immediately following the July 4 launch and the 50 won stamp was issued last month, thenover that interval the cost of mailing a letter rose at a rate of approximately 200 percent per year. Such a magnitude would be broadly consistent with previous estimates of post-currency reform inflation based on the prices of rice, corn, and foreign exchange.