Mapping the Succession I: An Overview of Institutional Change

Luke Herman has been working for some time on a large-scale data project on the North Korean leadership, spanning the period from 1996 to the present. With Jaesung Ryu, we have now done some simple analysis of trends; we report some of them here. In future posts we will focus on the changing role of the military and the composition of elite networks during the transition.

We begin with an overview of three important bodies: the National Defense Commission, the Politburo (including the Standing Committee, full and alternate members) and the Secretariat. We do not make any claims about the operational significance of these bodies; it is hard to know if they even meet. But they are made up of individuals that consistently appear as politically significant actors, because:

In Figure 1 below, we simply pool these institutions, tracking the total number of members on each body from 2002 to the present; membership in the body for a given year is captured by membership on December 31 of the of the year in question, except for “current” which is as of May 2012.

We see two developments of interest. First, all of these bodies shrank over the 2000s, largely by natural attrition as elderly members died off. These institutions were aging and probably becoming even less relevant—to the extent that they ever were. The second development of note is the expansion that occurs in 2010, beginning with a major restructuring of the National Defense Commission. The expansion of the Politburo is even more dramatic and occurred in several stages, and with some substantial shuffling. In short succession—in September 2010 and April 2012—the leadership convened two Party Conferences; these were the first major party assemblies in thirty years. The Politburo grew from 10 to 31 in 2010, and then witnessed some attrition with the loss of 4 members between the two conferences before again expanding to 31 in 2012. 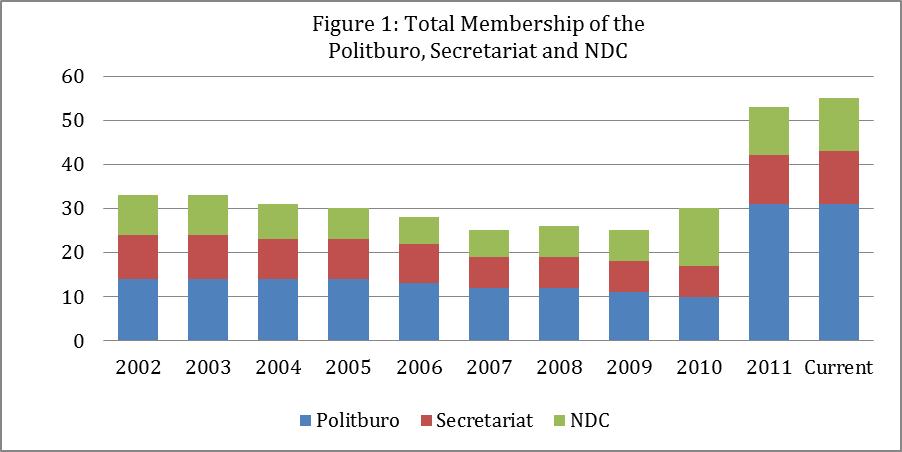 However, the phenomenon has become even more pronounced during the succession. Figure 2 shows the number of positions of all three institutions as well as the number of discrete individuals occupying them. As can be seen, the increase in the number of positions grows much more rapidly than the increase in the elites holding them. While the power elite is expanding, as new members are being brought into the inner circle, the “inter-locking directorate” structure at the top is also becoming more pronounced, suggesting an inner core to the inner core that we will explore in more detail in future posts. 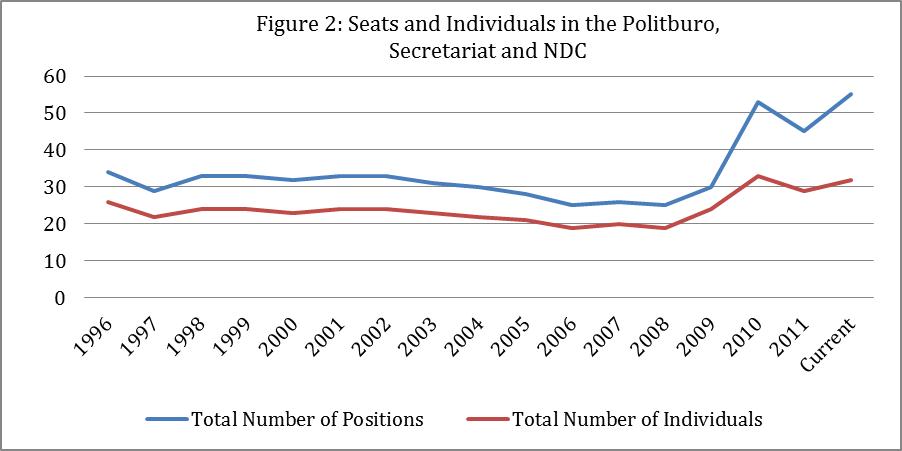 Another way to track the institutional history is to look at turnover. Because the number of individuals on each of these bodies is not necessarily constant—ie., people who retire or are dismissed are not necessarily replaced—we measure turnover by considering both dismissals and new additions; in Figure 3, we enter additions as positive numbers and dismissals as negative. To avoid double counting, we also focus for this purpose not on the total number of positions, but the total number of discrete individuals occupying these high offices. 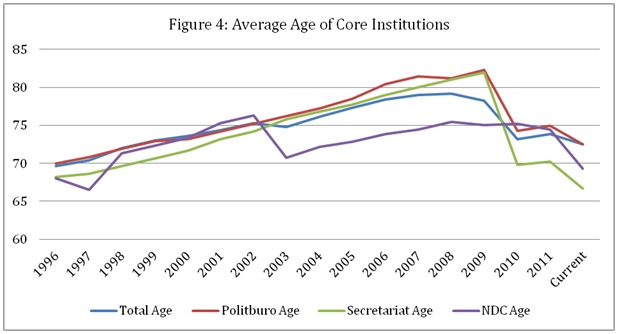