A hilarious website—Kim Jong Il Looking at Things —has gone viral in the YouTube/Tumblr world. But the concept of “on the spot guidance” is—unfortunately—not so funny. It reflects the crazy idea that Dear Leader is capable of making informed judgments about things he knows absolutely nothing about. It also reflects the debilitating necessity in state socialist systems for the top leadership to be involved in arcane allocational decisions and exhortation.

But perhaps above all, it shows the distorted and sycophantic nature of the system which, as Amartya Sen taught us, can lead to disasters like famines. Dear Leader is always shown in nice settings with gleaming high-tech equipment and plenty of food.

But for North Korea nerds like us, the fact that these visits are on the public record provides a great opportunity to track what the leadership is thinking about. The figure below uses a dataset on Kim Jong-il’s “on-the-spot-guidance” tours from 1990 through 2010. With the exception of an extraordinary emphasis on economic units in 1996, during the peak famine period, the period from 1990 through 1997 witnessed a steady increase in visits to military units. This is the period of political transition, when Kim Jong Il was consolidating his power. 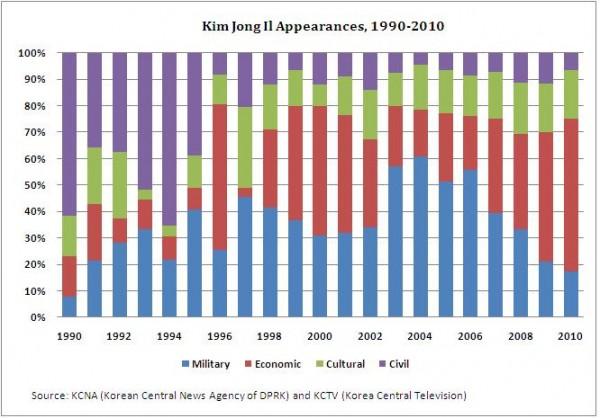 In 1998, however, economic sites start to increase in share. Our interpretation is that the leadership was preoccupied with reconstruction and was contemplating the reforms introduced during the brief window from the North-South summit of 2000 through the roll-out of the July 2002 measures.

From the onset of the nuclear crisis through 2007, not surprisingly, the military was once again the favored destination.

But what are we to make of the fact that visits to economic units once again increase after that time? Unfortunately, the increased attention to economic units does not reflect a return to reform, but rather precisely the opposite: the adoption of socialist exhortation as a means to spur production, evident in the 100- and 150-day campaigns of the last several years. We still see little evidence that the leadership is thinking hard about how to get out of its chronic straits. The renewed emphasis on attracting foreign direct investment seems to be operating at arms length from other indicators of the regime’s policy intentions, most of which are going in the wrong direction.