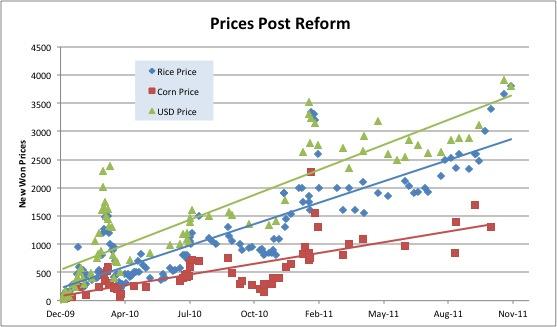 It has been two years since the November 30, 2009 currency reform set off a bout of inflation and contributed to the further devaluing of the North Korean won.   In the aftermath, according to Bank of Korea statistics, the North Korean economy shrank and the FAO-WFP recently put out a report documenting continuing food availability problems.

The chart above shows the trajectory of prices for rice, corn, and the US dollar since January 2010 (i.e. after the huge step-jump in real prices in December 2009 following the currency reform).  A simple regression of the prices (technically their logarithmic values) against time suggests that since the beginning of 2010, inflation on an annualized basis has averaged 131 percent for rice and 138 percent for corn.  The won has depreciated against the dollar at a 136 percent annualized rate. A monthly breakdown of price movements suggests that while remaining high, the rate of inflation has attenuated, declining in 2011 relative to 2010.

The co-movement of the blackmarket exchange rate and grain prices would be consistent with a small, open economy in which prices are roughly constant in hard currency terms, but are skyrocketing in terms of the rapidly depreciating domestic currency.  In the extreme this could depict an economy that was effectively becoming dollarized.

The rise in the relative price of corn to rice would be consistent with a deteriorating situation in which households are shifting demand away from the preferred staple (rice) toward the cheaper, less preferred grain, corn. In other words, belt-tightening.

It’s not just food either.  DailyNK reports growing anxiety over rising coal prices (used for winter home heating). Some observers attribute the scarcity of coal in local markets to the diversion of domestic coal supplies to the Chinese export market. IFES recently reported that North Korea had suspended anthracite coal exports to China precisely over concerns about spreading internal shortages.

These trends—sustained inflation, the rise in the relative price of a less preferred grain, and continued food price increase immediately following the harvest, do not augur well for North Koreans without access to hard currency.

The IFES web page is down at the moment, but I posted the article on my page: http://www.nkeconwatch.com/2011/11/28/anthracite-export-to-china-suspend...

If corn inflation is higher (138%) than rice inflation (131%), why is the slope of the corn line flatter than that for rice? I would have expected the opposite, given the axes...

That is an excellent point on the corn prices. There are two reasons that the regression results we reported and the graphical lines vary. First, the above chart is presenting prices in their nominal form. Our regression model used logged prices which makes the variation between the prices somewhat different. Secondly, the above chart is meant to be illustrative and uses the Excel regression formula to produce trendlines. I can't speak for how Excel calculates it's regressions, but I can say that our logged regression model was created using STATA statistical programming software, which is a much more efficient program for conducting time series regressions. An additional chart that we omitted from this post displays the logged prices and correctly displays a higher slope for corn prices. Looking at the above chart, however, we can see that the short and sudden spike in corn prices just before February 2011 may be shifting the corn price coefficient a little upwards.

The Return of Macroeconomic Instability