It is prudent to wait for more technical analysis of the launch before jumping to conclusions about its effective range. Yet some credible analysts—and the North Koreans—have already suggested this was the longest-range missile test to date, based on an estimated flight time and of roughly 50 minutes and a lofted trajectory reaching 2800 miles (David Wright, for example, following on the initial DoD announcement. As of this posting, others appear to be holding their fire; for example, Josh Pollack on the Arms Control Wonk thread.

But in any case, one thing we do know: the North Korean announcement not only claimed that it was an ICBM but a new model—the Hwasong 15—and that “it is the most powerful ICBM which meets the goal of the completion of the rocket weaponry system development set by the DPRK (emphasis added).” Is this hopeful—the regime feels it has achieved its objectives, gotten all the leverage they need out of the tests and now can now really pause? Or is this just another phase on a steady march? One possible reason for the latter interpretation: only the North Koreans know the payload of the test, which could approximate a warhead, including a nuclear one, or could weigh next-to-nothing, in which case the effective range would be overestimated, even wildly.  Parsing the North Korean statement, Vipin Narang hypothesizes that the distinguishing feature of the Hwasong 15 over the 14 may be a host of small technical improvements, but also a crucial one in increased engine thrust. Needless to say, that is not good.

Naturally, the invisible college was parsing motives, often in the misbegotten assumption that this was designed as some sort of signal. The most obvious candidate: that the launch was in response to being put back on the list of state sponsors of terrorism. My preferred explanation is that the timing reveals nothing and this is simply a further step in the development of capabilities. Shea Cotton, a member of Jeffrey Lewis’ great team up at Middlebury Institute of International Studies, already debunked one recent timing theory: that the pause in testing had any signaling intent. One reason to think this: that Joseph Yun had suggested publicly that a pause in testing could be read by the United States as a positive sign of intent and could open doors. However, Cotton shows that the incidence of testing in the fourth quarter since Kim Jong Un came to office has consistently been lower than during the first three quarters. But note: it was not zero in 2015 or 2016 and it is now not zero in 2017 either. Put differently, recent testing behavior did not constitute a deviation from trend. I am sticking with the theory that North Korean testing is first and foremost about technological advance. If you want to call that a “signal,” fine. But let’s be clear that it is—again, first and foremost—a signal that says “we have these capabilities. Live with it.” 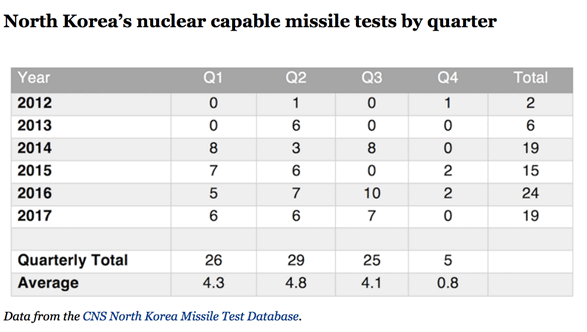 So now the question is what to do about it. As usual, the administration is sending the mixed signals that always come with efforts at coercive diplomacy (Trump: “we will handle it.” Tillerson, “diplomatic options remain viable and open for now. (emphasis added).”

I also cross-checked the list with the membership of the Proliferation Security Initiative, a body about which we have not heard much recently. It is pretty clear where this is headed. Rather than going to the UNSC for another resolution and quibbling over this product category or that, this conclave is going to act like a caucus to consider further steps to isolate North Korea. Tillerson gave away the objective pretty clearly in his statement with this tag line: “the international community must take additional measures to enhance maritime security, including the right to interdict maritime traffic transporting goods to and from the DPRK.” In the credit-where-credit is due department, Leo Byrne at NKNews and NKPro is the go-to open source expert on shipping, and his North Korea Ship Tracking site is a goldmine. If this moves in the direction of interdiction, things are about to really heat up. On the one hand, this is a clever way to escalate without the kinetic actions with respect to North Korea itself. On the other hand, North Korea could rightly claims that such actions are illegal and themselves constitute a casus belli.

This post will be updated as new information is available.

At her press conference, Nauert referred to the 16 countries of the UN Command Sending States, but the list includes 17 counting the US and 18 if Japan is included.

The official UK figure for number of service personnel is 81,084. Source: https://www.gov.uk/government/news/memorial-to-the-korean-war-unveiled-in-london

If anyone is interested in this figure let me know; it involves the eminent and remarkable historian General Sir Anthony Farrar-Hockley, who served in the Glosters at the Imjin battle, and later as Cabinet Office Historian on the British role in the Korean war. The main reason for the difference in UK figures and others' seems to be that we counted the total number of personnel who were sent.

Asia Society Panel on the Alliance and North Korea