With the sequester looming, we were intrigued by a study done last year on American attitudes toward defense spending that recently got airplay on NPR. The Program for Public Consultation, in collaboration with the Stimson Center and the Center for Public Integrity, finds that attitudes toward defense spending are much more skeptical than they are inside the Beltway. Whether the findings have implications for the looming budget fight is an altogether different question. But if they do, it’s relevance to the Obama administration’s pivot to Asia is clear; tradeoffs loom.

The approach of the Program for Public Consultation comes out of a tradition in political science called “deliberative democracy.” Respondents are presented not only one-sentence questions, but more detailed arguments and data; in some cases, polling takes place before and after discussion groups or other policy exercises. The differences in findings with more traditional forms of polling can be sharp. For example, a recent Pew poll found the usual “we want it all” responses from the public. Of 19 policy areas, respondents wanted spending to stay the same or increase in 18; only foreign aid was put on the chopping block. With respect to the military, 32% wanted an increase in spending, 41% wanted spending to stay the same and only 24% wanted cuts. 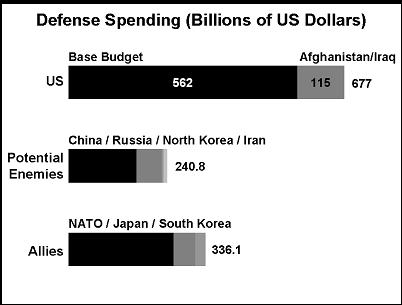 Not surprisingly, the willingness to cut spending depended on how actual spending compared to respondents' priors. Given that most thought spending was high, they were more inclined to cut than other polls suggest. Respondents were asked to choose between three options: raising revenues, reducing non-defense spending, and cutting defense. Sixty-two percent said they thought Congress should reduce national defense spending. This included half of Republicans (49%) and a very large majority of Democrats (78%), with 52% of independents agreeing.

Respondents then engaged in an actual budgeting exercise that sought to set a limit on defense spending. In this exercise, the majorities supporting defense cuts swelled dramatically: 76% set a level for 2013 lower than the level for 2012. This included two thirds of Republicans (67%), 90% of Democrats, and 68% of independents. Another 11% kept the same level and 10% proposed a higher level of defense spending. The findings were replicated when asked about nine broad categories of defense spending—including ground, naval and air capabilities--and spending for particular weapons systems. The deepest cuts in percentage terms were to nuclear weapons (27%), and in dollar terms to existing ground forces ($36 billion). The one area that was increased, curiously, was the development of new capabilities for ground forces. On average, respondents cut all areas by an average of 18%, with expected partisan differences (Republicans 12%; Democrats 22%; and independents 19%.)

The problem with these exercises is that most citizens do not have contact with defense spending data, and so these exercises do not reflect their uninformed "let's have it all" preferences. Nonetheless, the findings are intriguing because they suggest that there is some political room to go after defense spending. We believe that American interests in East Asia warrant a robust military presence in the region. We also believe that this can be accomplished in the context of a gradual moderation of overall defense spending, particularly as the region looks more closely at its own defense needs in light of the potential challenges posed by China and North Korea. However the average American citizen—and of both parties—is potentially comfortable with more extensive cuts.

The TikTok Deal Is a Defining Moment for CFIUS