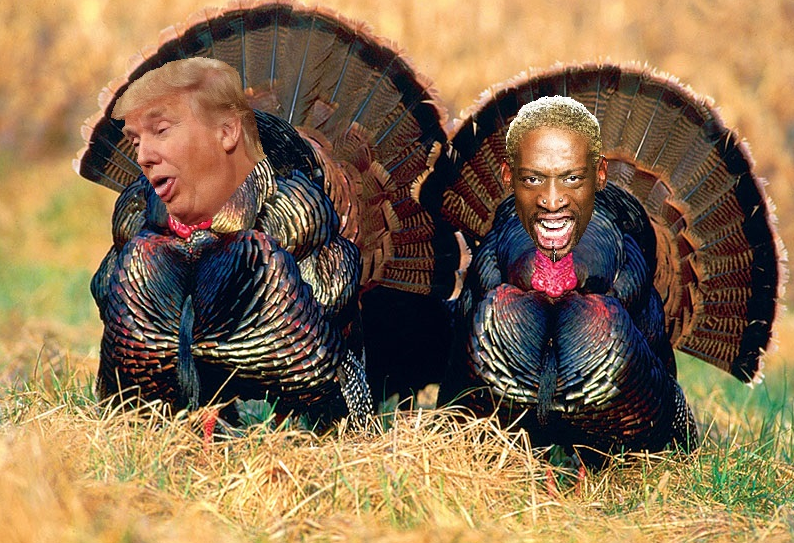 Now that the tryptophan haze has dissipated it is time for the 5th annual Turkey Shoot. (Or if this event were the Super Bowl, Turkey Shoot V.) We’ll start with the skinny-necked birds and work our way up to bigger game. Kent, hand me the hatchet.

A couple years back we mentioned the connection between some of our loopier white supremacist compatriots and North Korea. Well, that connection has re-emerged but in the oddest fashion. While catching up on back reading, I noticed an item in the Southern Poverty Law Center’s Intelligence Report about that golden oldie of the conspiratorially inclined right, the secret FEMA concentration camps being prepared in anticipation of the Obama auto-coup. One bunch of loony tunes actually offered up purported photographic evidence of one such camp, supposedly in rural Wyoming. The photo was indeed of a prison camp, just not one in Wyoming: the camp was in North Korea, photographed as part of David Hawk’s Hidden Gulag report for the Committee for Human Rights in North Korea (full disclosure: I am on the HRNK Board). Hey, Kim Jong-un, Barack Obama; Wyoming, Ryanggang; hard to tell ‘em apart. 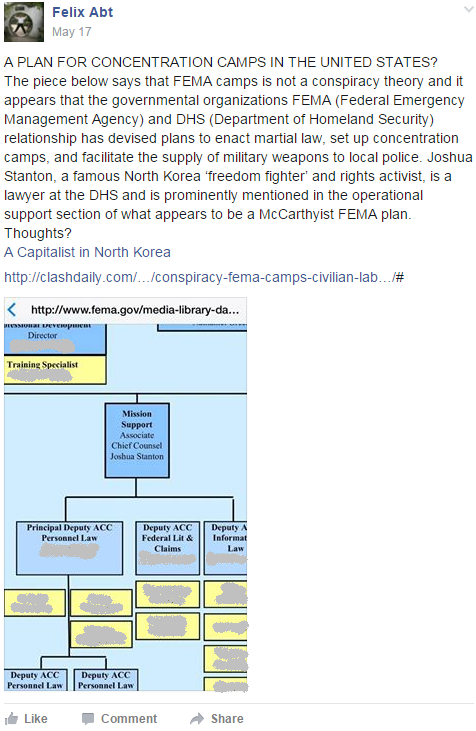 Moving on to bigger game, Ambassador Dennis Rodman, last seen serenading Kim Jong-un on his birthday (if Worm had wanted to do the full Marilyn Monroe he should have dug up one of his old gowns), has endorsed Donald Trump for President. Tom Brady can blame it on incipient chronic traumatic encephalopathy, but what’s Rodman’s excuse? And I dunno how this is going to go down with Worm’s buddies at the Rainbow Coalition. Jeb Bush’s campaign is foundering: maybe he could put his millions to use and shake things up a bit by carpet bombing Iowa and New Hampshire with commercials featuring the Rodman endorsement.

Maybe the reason that the Worm is attracted to the Donald (apart from having a thing for fascists with weird haircuts) is that in the Donald’s own words: Trump is like North Korea—no one talks about him, or the nuclear-armed nation, because there’s no answer for either. One might be tempted to add, both are racist, chauvinistic, and belligerent, but I don’t want to pile on. Hmm, I think I smell a “how is Trump like North Korea” contest in the offing.

One guy who was never like Donald Trump, was Native American poet and activist John Trudell who sadly passed away from cancer earlier this week aged 69. Trudell was a onetime spokesman for, and later national chairman of, the American Indian Movement. For his trouble he lost his wife, his children, and his mother-in-law in a fire that many believe was linked to local law enforcement and the FBI. I won’t try to summarize Trudell’s remarkable life, only to quote his FBI dossier that called him “extremely eloquent and therefore extremely dangerous.” JT went on to become a spoken word musician and actor. For an introduction to his life check out the documentaries Incident at Ogalala or Trudell.

It’s ironic that I note his passing in a post that has its roots in Thanksgiving—a holiday that originated as a celebration of survival by settlers who would commit genocide against the very people who had made their survival possible. I can’t imagine what John would have made of the turkeys reviewed on this page but when contemplating Donald Trump or Kim Jong-un it is worth keeping his words in mind:

“No matter what they ever do to us, we must always act for the love of our people and the earth. We must not react out of hatred against those who have no sense.” —John Trudell, Black Hills Survival gathering, 18 July 1980.

I took note of that concentration camp claim in the U.S. but didn't say whether I agreed with it. I asked for thoughts and you answered. Great! I clearly agree though that the state should vigorously help to get Marcus Noland’s and Josh Stanton’s cats off the trees:
https://www.facebook.com/ACapitalistInNorthKorea/photos/p.10732195660363...

So, are you now conceding that (a) the entire theory (debunked here, by Popular Mechanics) is false or (b) you don’t claim know if it’s true or false?

That was a conspiracy theory, Josh. But why would concentration camps ever become necessary as long as your dept. makes sure street lights are spying on your citizens? North Korea must be jealous of your resources, Josh... http://www.infowars.com/dhs-official-you-would-never-know-if-new-street-...

So before you moved on to citing another conspiracy theory (from Alex Jones, no less) you conceded that the FEMA camps thing was "a conspiracy theory." Do you admit that to the best of your knowledge, the theory is false?

Thank you for admitting that you published defamatory information about me — along with the names of my colleagues — knowing it to be false. Would you care to share the timing and location of your next visit to the United States, or would you be willing to waive service of process?

“defamatory” says the man who called me, among other similarly flattering things, “Switzerland’s greatest embarrassment to humanity since François Genoud” (Genoud was a glowing admirer and supporter of Hitler and a member of his Nazi party and later a supporter of terrorist groups). If you come to Switzerland I may give you the opportunity to give evidence in court in support of your claims against me.

Yes, after you called the U.N. Commission of Inquiry report “a massive exaggeration” in an interview with a Swiss newspaper. Full translation at Item 10 of this post: http://freekorea.us/2014/02/21/more-reactions-to-the-n-korea-coi-report-...

"Extermination, enslavement, and starvation of the population." If this was entirely true and not an exaggeration there would be no more living North Koreans by now! Here is the newspaper's question and my answer: BaZ: Mr. Abt, UN human rights experts are accusing North Korea’s government this week of serious crimes against humanity in their newly published report. It speaks of extermination, enslavement, and starvation of the population. You lived for 7 years in North Korea. What do you say about these accusations? Abt: There can be no doubt that there are abuses of human rights. However, it’s a massive exaggeration that the population is systematically exterminated, enslaved, and starved. During the worst crisis period — following the collapse of partner trading nations in Eastern Europe, as well as massive floods and drought – hundreds of thousands did in fact starve in the 1990s. To blame that all on the regime is an unreliable over-generalization. I dealt with North Koreans from all parts of the country, and different levels in society — they were proud people, and would have been offended if you called them slaves. I’ve also met North Korean escapees and asked them if they left because they were abused and oppressed. Their answer was, “No - I just wanted a better material standard of living in South Korea,” which is entirely understandable.