Senator Rubio: One of the arguments that has been made is that, clearly, in a country that's struggling with poverty and a lot of suffering, you have a government willing to spend between 15 and 25 percent of its gross domestic product on the military, particularly a very expensive nuclear program, a nuclear ambition...[that food aid] in many respects, relieves the pressure on the North Korean government to divert funds away from the nuclear program and divert it toward ‑‑ and place it to where it should be, which is feeding its -- and caring for its people.  Do you have thought ‑‑ and you probably have read some of those statements that have been made by some -- and do you have any thoughts on that, in general?

Ambassador Bosworth: My general thoughts on that, Senator, would be that it's, I think, indicative of the nature of that regime that they're prepared to do this.  My second observation would be that, in my experience, the last group of people in North Korea who will not have food are the military.  So, if we provide food, and if we can monitor it carefully and we know that it's going to children, institutional needs, I think it's the right thing to do.

Senator Rubio: I think that the argument that some have made… [is that] to the extent that food and goods does gets to people, what it does is, it takes pressure off the regime to have to take that money away from its nuclear program and instead divert it to its people, where it should be in the first place.

Dr. Campbell: Can I say, Senator, I don't think that would be the kind of calculus that a western government that heeds the needs of its people would perhaps take into account.  I don't think the North Korean leadership believes in these kinds of tradeoffs.  I think they are committed to these programs that you have described.  And they have demonstrated, historically, that they are prepared to allow enormous suffering.  Very substantial component of its population suffered through starvation in parts of the 1990s.  And so, the choice really, here, is whether these people are allowed to starve.  And that's, frankly, a humanitarian issue, really not a one of political discourse.

More recently, my colleagues at the Committee for Human Rights in North Korea, Mort Abramowitz and Roberta Cohen addressed the same issue in the National Interest:

Some oppose food aid for the most vulnerable out of fear it would still strengthen the regime by freeing up North Korean resources for other purposes. This argument presumes that without American aid, the North Korean government would devote its resources to the needs of its people. The record hardly bears that out. North Korea’s “military first” policy makes clear that its priority is not its people. China’s unconditional food aid is apparently directed mostly to the elite and army; other food for conscripts is taken from farmers and their emergency stocks. Holding back food aid merely compounds North Korea’s neglect of its people.

These responses imply that the North Korean regime is not only callous, but completely insulated from politics: that it  can let people starve without internal political repercussions. If one accepts that the North Koreans must have at least some concern about the welfare of the populace—if not for humanitarian reasons, than out of simple expediency—then the possibility opens up of trade-offs across alternative expenditure uses.

There are two analytically distinct issues, roughly corresponding to Bosworth's and Campbell's respective answers.  The simplest is the issue of diversion--if aid is diverted to military consumption, the military can then devote money that would have otherwise gone to food on other items.  The more subtle possibility is that aid relaxes the state's budget constraint and frees up resources for a panoply of purposes, including the military, in effect acting as implicit balance of payments support.

So, is food aid fungible?

Of course it is.

The evidence is quite compelling, actually.  The first chart below demonstrates that as food aid ramped up during the 1990s, imports on commercial terms fell—and never came back.  Some might object that the fall in commercial grain imports was a due to the poor state of the North Korean economy, but as the second chart shows, other imports began rising after 1998—just not food imports. Sherman Robinson, Tao Wang and I even constructed a computable general equilibrium model that would allow one to analyze how military expenditure increased as a result of this implicit balance of payments support. (It would be less than dollar-for-dollar since the government would presumably use the windfall on a range of goods and services purchased by the state, not just the military.) The anecdotal evidence suggests that such concerns are not misplaced: for example, in 1999, after the famine had ended, but aid from South Korea and the WFP continued to ramp up, the North Korean military went on a buying spree, purchasing among other things, the Kazakh air force.

As one who supports the provision of food aid to North Korea, I understand the temptation to deny this linkage.  I have particular sympathy for sitting officials questioned about this issue in a public setting. But there is something to be said for being honest with ourselves.   Providing food aid to the people of North Korea is the right thing to do—even if at the margin it advances the military ambitions of their government. 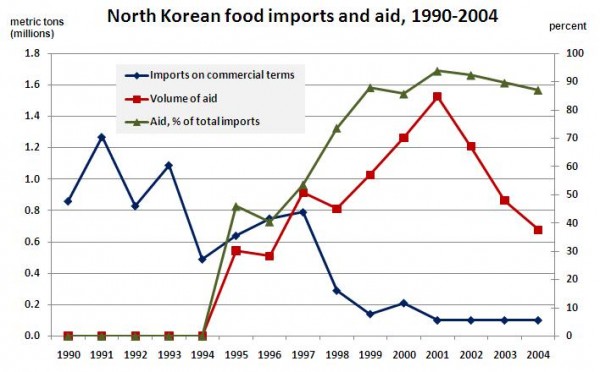 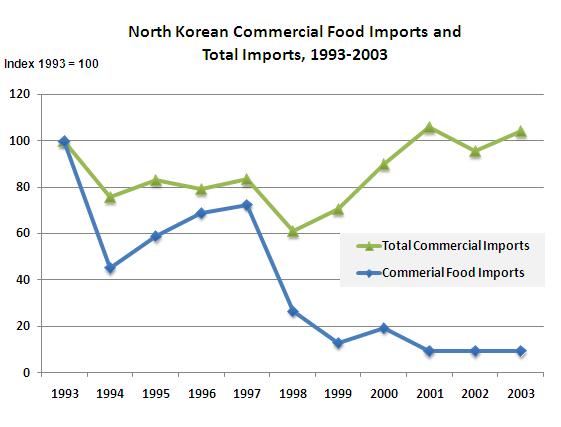