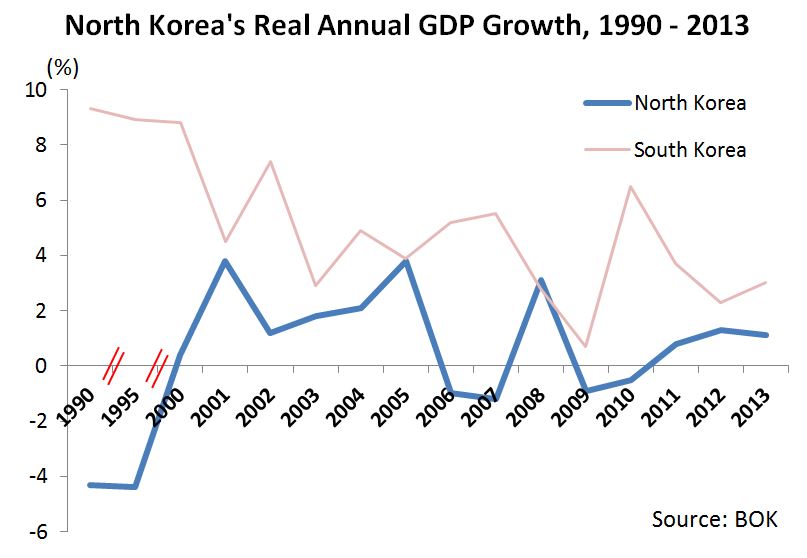 Vice President Mondale once told me that anyone who described themselves as an expert on North Korea is a liar or a fool; my corollary is don’t trust any figure relating to the North Korean economy that comes with a decimal point attached. Yes, dear readers, its time for our annual review of the Bank of Korea’s estimates of North Korean national income.

According to the report, BOK constructs its national income account estimates “using basic data on North Korea’s economic activities supplied by relevant institutions...GDP at current prices is estimated with the use of South Korean prices and value-added ratios.”

What this means in non-economist speak is that someone (the NIS?) gathers data using some sources and methods which presumably put an emphasis on physical indicators that are easily countable. So that, as a practical matter, the South Korean authorities may have a better grasp of output in some sectors (like coal, where it’s easy to count railcars leaving a limited number of mines) and less on say services such as education where both the quantity and quality are more difficult to observe. Not surprisingly, the agricultural and industrial sectors of the economy show more output variability than does services. Whether this reflects reality or just problems counting physical indicators for services is unknown.

Then, having obtained these physical measures of output, we need prices and value-added weights to aggregate them into a single measure of the value of output. According to the BOK report they use South Korean prices and value-added weights. There are two problems here, though one problem may be diminishing over time. The first problem is that the relative price structures of the North and South Korea economies are not the same. However, over time it appears that the structure of domestic prices in both economies is getting more like world prices, and hence more like each other. So differing relative prices is probably less of an issue today than say 20 years ago.

Its less clear that the problem is disappearing with respect to the use of South Korean value-added weights that reflect the underlying techniques of production which remain vastly different across the two economies. Bottom line: we know there are some non-trivial problems with using the South Korean data to construct the North Korean GDP estimates.

Rumors have long circulated that the South Koreans either obtained or constructed a North Korean input-output table which they could use for these calculations, and contrary to the statement in the BOK report, weights derived from this source are used to construct the North Korean national income estimates, not the South Korean value-added weights. I personally do not know whether these claims are true or not.

Substantively, the report says that the North Korean economy grew a bit more slowly in 2013 (1.1 percent) than in the previous year (1.3 percent). The accuracy of these growth rates and even whether growth slowed or accelerated are hard to assess. Anecdotally, the city of Pyongyang appears to be increasingly prosperous, while aid groups and others which have recurring access to provincial cities and rural areas report stagnation, if not actual retrenchment. A possible exception is North Hamgyong province which appears to be benefitting from Chinese investment.

So does increasing traffic and cell phone use in Pyongyang, and stagnation in the hinterlands add up to 1.1 percent growth? Beats me.

However, if you take these figures seriously they imply that the gap between living standards in North and South Korea continues to widen because the richer country, South Korea, is growing faster than its poorer neighbor. According to BOK, the level of per capita income in South Korea is more than 20x per capita income in the North. Whether its 10x, 20x, or 30x, I don’t know, but the gap is huge, and on these figures, growing. One implication is that if the “costs of unification” are a function of that gap, i.e. the amount of investment needed to get North Korean incomes up to some percentage of those in the South, then the implication of this latest report is that those costs are rising.

The accounts of Pyongyang being prosperous while the countryside declines would seem to show no matter what happens economically, political considerations are the only thing that matter to the KWP. Your comment about the "cost of unification" rising makes me wonder if the North would purposely destroy its economy to scare off South Korea from really wanting to unify. Once again thank you for the information.