Chinese economic growth for the past decade has been categorized by controls on resource and capital price increases, excessive levels of investment, and overcapacity in certain industrial sectors. Policymakers have been concerned with overcapacity since 2005 yet even after a decade of regulatory intervention industrial overcapacity has not only persisted but in fact worsened. Figure 1 shows the average capacity utilization of the worst affected sectors - steel, cement, aluminum, plate glass, shipbuilding, and photovoltaics - was only around 70 percent in 2012. Today these sectors represent less than 2 percent of industrial profits but control 10 percent of industrial assets. However, China may finally be getting closer to tackling the issue. 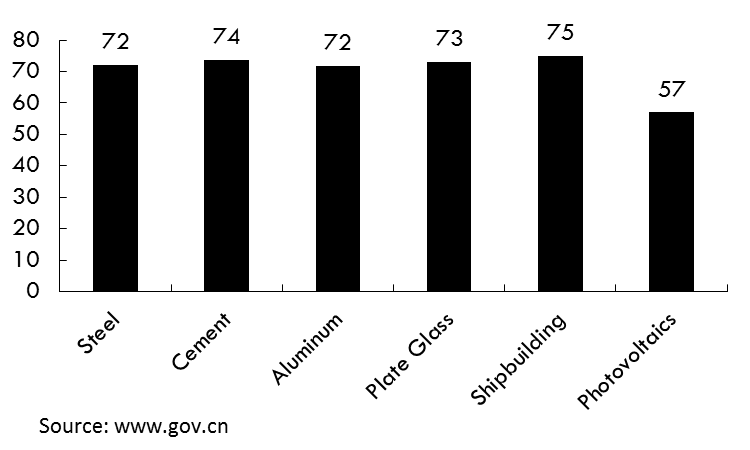 Overcapacity sectors are facing the prospect of higher inputs costs as underlying price distortions are removed. During the third plenum last year, the Xi Jinping and Li Keqiang administration called for removing price controls and allowing markets to play a decisive role in resource allocation (使市场在资源配置中起决定性作用和更好发挥政府作用). This idea is also reflected in their new plan to tackle overcapacity. Last October the State Council for the first time added price reform (完善和规范价格政策) for water and electricity to a pre-existing list of policies to combat overcapacity dating back to 2009. The new policy calls for removing any local price subsidies and introducing tiered pricing for significant users of water and electricity in overcapacity sectors. For example, last year the National Development and Reform Commission (NDRC) introduced a progressive electricity pricing system for aluminum producers. Heavy industrial firms are the dominant users of electricity and water and therefore will be the most adversely impacted by higher costs.

Progressive pricing for water and electricity will add additional pressure to overcapacity sectors now –for the first time - facing the prospect of a prolonged slowdown in demand. The photovoltaics industry was the first to face significant problems following the EU debt crisis as export demand in their primary export markets - Spain and Germany - evaporated.  Shipbuilders are struggling due to continued weakness in global trade. More recently, steel, cement, and aluminum are suffering from a slowdown in domestic demand for real estate and infrastructure.  Sinking profit margins are a reflection of the rising pressures from higher input prices and falling demand. Figure 2 shows in 2013 the average large-scale aluminum smelter was loss making. Although some of these demand pressures could be cyclical, the prospect of resurgence in domestic infrastructure and real estate investment growth appear unlikely and would in fact run counter to the slower growth imperative of China’s current leadership. 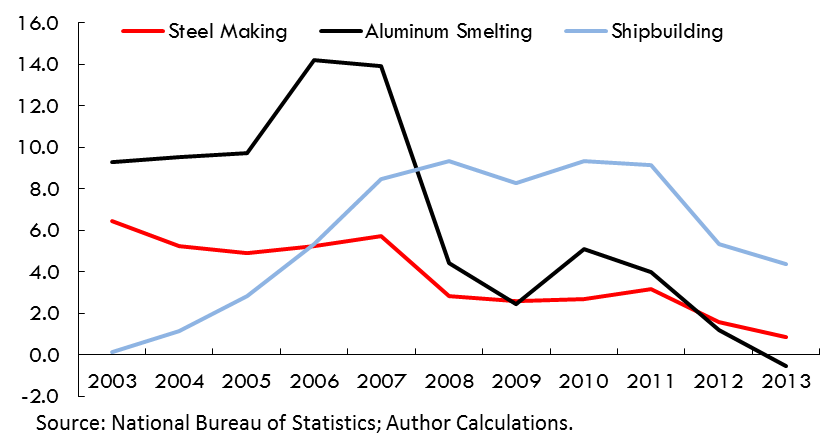 Rising cost pressures and weaker growth in domestic demand should improve the competitiveness of overcapacity sectors in the long run. Figure 3 shows that on average the return on assets of sectors with severe overcapacity problems are less than half that of the industrial sector as a whole. If less competitive firms exit this could lead to consolidation around more competitive players capable of adjusting to more market-determined conditions. However, this will require a commitment of central and local regulators to allow less competitive firms to exit the market.

In the past loss-making enterprises could avoid exit with the help of local governments. But today local governments also appear in a weaker position to bailout struggling firms. Local debt has now risen to over 30 percent of GDP. Many governments are making just enough non-tax revenues to cover the cost of financing their infrastructure investment vehicles let alone provide subsidies for loss-making steel firms. Moreover the Xi Jinping and Li Keqiang administration will now be evaluating local officials more on resource consumption, environmental costs, and debt levels, less on the kind of GDP growth targets that benefit heavy industrial sectors.

Initials signs that these factors are beginning to address overcapacity are mixed. In the photovoltaics industry there have already been a number of high profile defaults. However, other enterprises in overcapacity sectors - such as the China Credit Trust Product case – appear to avoid default with continued local intervention.  Thus it is still too early to declare victory but broadly the new leadership appears committed toward reducing intervention in the market. The test will come as local governments and regulators find it increasingly difficult to support non-competitive firms and must allow more defaults and exits in overcapacity sectors.

Implementation of the Santiago Principles for Sovereign Wealth Funds: A Progress Report

Getting Used to Slower Growth in China: Quality over Quantity