From “We Should” to “We Will”: A More Disciplined Approach to Reform in China

Every March, the Chinese Premier delivers a government work report to the National People's Congress which includes a section outlining the State Council's agenda for the following year. If political rhetoric is worth anything in China, the first work agenda delivered by Premier Li Keqiang is cause for optimism in 2014.

Based on the language of the report, structural economic reforms are a higher priority for the current administration than the last. The government work agenda includes several sections outlining key policy priorities for the following year. This year Premier Li Keqiang said deepening reform was the “main priority” (要以深化改革为强大动力).  He signaled this by placing the section on reforms entitled “making breakthroughs in reform” (推动重要领域改革取得新突破) ahead of all other tasks for 2014. In contrast, Wen Jiabao put structural reforms as the last of the State Council priorities for 2013 even below rural development. 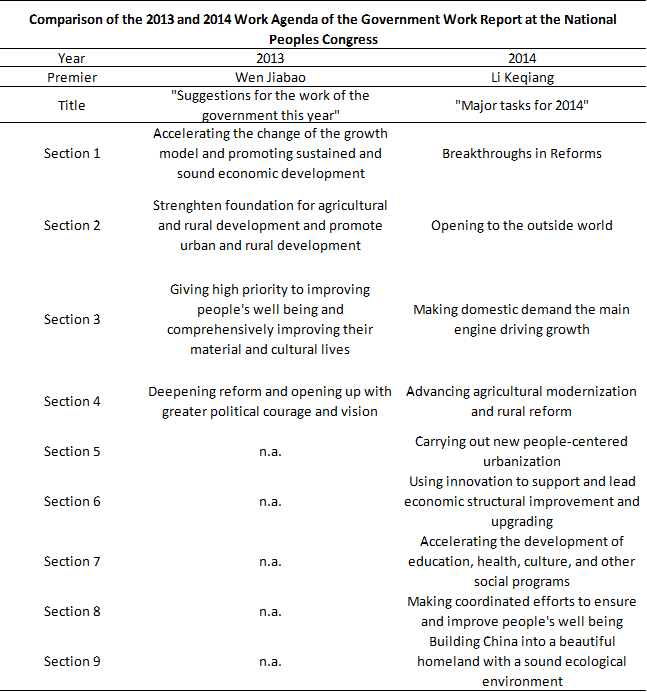 Premier Wen Jiabao’s work agenda tended to be vague and filled with broad platitudes. In contrast, Li's 2014 report presents detailed, actionable reform items. For example when discussing the fiscal reform agenda for 2013, Premier Wen in a brief sentence said “we should establish a taxation system conducive to optimizing the economic structure and enhancing social fairness” (促进形成有利于结构优化，社会公平的税收制度).  In contrast, Premier Li Keqiang provided specific steps for tax reform in 2014 such as extending the VAT trials to include railway, post and telecom services, replacing fees with excise and resource taxes, and moving ahead with property tax and environmental tax reform. Furthermore, Premier Li Keqiang also favors specific reform metrics and deadlines. For example he called for “canceling/delegating at least 200 administrative approvals this year” (今年要再取消和下放行政审批事项200项以上) in addition to the 416 approval procedures canceled/delegated last year.  Such metrics were less common in the annual work agendas of Premier Wen.

In terms of broad strategy and tone, much of the language about an active government role in economic decisions has also diminished. Last year, Premier Wen Jiabao began his work agenda discussing how the government would “strengthen policy guidance” (要加强政策引导) to encourage industrial reorganization and emphasized actively promoting “strategic emerging industries” (推动战略性新兴产业健康发展). In stark contrast, Premier Li Keqiang has made reducing the government’s role in the market a priority. In the work agenda for 2014, he called for more measures to give businesses more power over their investment decisions and make it easier to start a business (充分落实企业投资自主权，推进投资创业便利化).

Only time will tell if the items in the report translate to actual policy outcomes, but the new rhetoric signals a different approach to governance. Premier Li Keqiang has moved quickly in his first year in office to reorganize and slim down the bureaucracy. The new report outlines his plan to restore discipline across the bureaucracies and improve top-down execution.  The government work report is another sign that under Premier Li Keqiang the State Council appears more capable of pursuing reform than any time in the previous administration, now we will have to wait and see if the rhetoric becomes the reality.

Very interesting piece. Has there been much good explanation or writing, in English or Chinese (state media encomia don't count) about Li Keqiang's efforts to "reorganize and slim down the bureaucracy." That sounds like a monumental task. Where we can go to read about it further would be welcome. MPR