Urbanization and Economic Growth in China

It’s an article of faith amongst many analysts that China’s rapid urbanization will inevitably suck up any excess housing supply and boost consumption as new urbanites enter the middle class. For example, a new research report by the Reserve Bank of Australia begins with the following assertion:

In 2011, 1.9 billion square meters of residential floor space was built in China. This volume is more floor space than the entire residential building stock in Australia. The scale of construction is necessary, in part, to house the 20 million annual increase in the urban population.

Stephen Roach has a similar analysis:

But the pessimists’ hype overlooks one of the most important drivers of China’s modernization: the greatest urbanization story the world has ever seen. In 2011, the urban share of the Chinese population surpassed 50% for the first time, reaching 51.3%, compared to less than 20% in 1980. Moreover, according to OECD projections, China’s already burgeoning urban population should expand by more than 300 million by 2030 – an increment almost equal to the current population of the United States. With rural-to-urban migration averaging 15 to 20 million people per year, today’s so-called ghost cities quickly become tomorrow’s thriving metropolitan areas.

China cannot afford to wait to build its new cities. Instead, investment and construction must be aligned with the future influx of urban dwellers. The “ghost city” critique misses this point entirely.

According to this line of argument, the 20 million or so people joining the ranks of urban dwellers per year are a “floor” for housing demand. China may be building too many luxury apartments, but the aggregate amount of housing must increase rapidly to keep pace with demand. 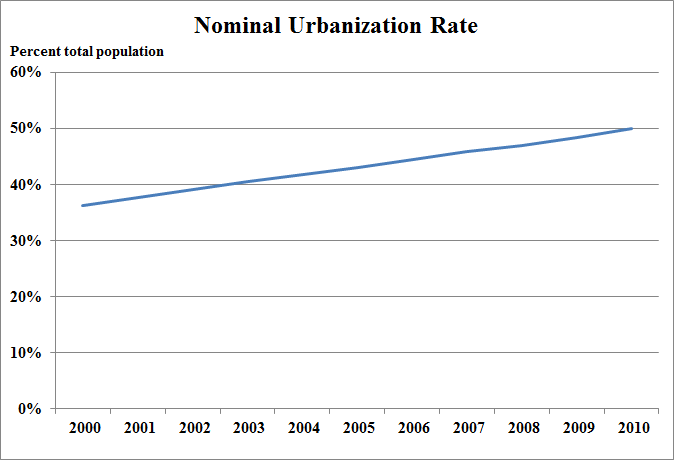 A related argument is that future economic growth will be driven by a rapidly growing urban middle class. A Brookings study estimates that these new middle class consumers may number as many as 670 million by 2021 and have the potential to eclipse the United States as the key source of consumption demand.

The problem with these analyses is that they overlook the bifurcated nature of urban China. Chinese cities are divided between the nominal urban population (everyone who resides in urban areas) and official urban hukou residents (those with urban residence permits and access to full social services). Noted geographer Kam Wing Chan puts the number of official urban residents at 460 million people in 2010, versus 670 million for the entire urban population.

The gap between the nominal and official number of urban residents is large enough to fit the entire population of Brazil. The average annual increase of official urban holders has been 14 million per year, much slower than the total urbanization rate of 20 million. Additionally, the growth of the official urban population has actually slowed over the past five years. 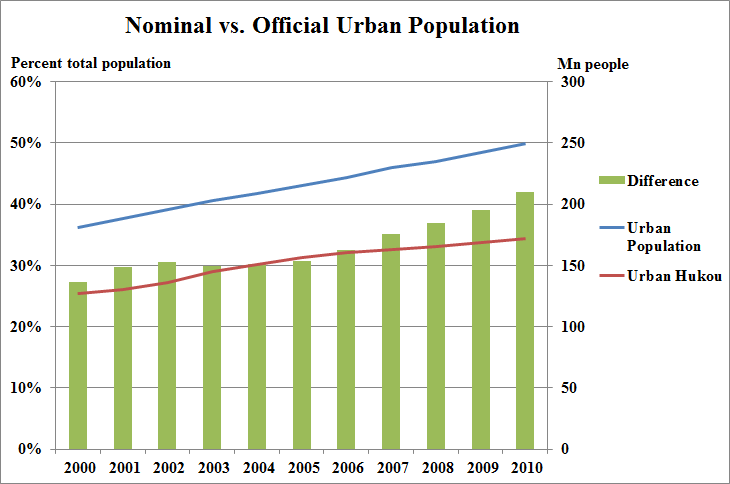 What accounts for the difference between the de facto and official number of urban residents? Kam Wing Chan gives an excellent breakdown of the sources of the increase in the nominal urban population. According to his estimates 15 percent is through natural increase, 43 percent through migration and 42 percent through reclassification of rural areas into urban ones.

Understanding the differences between these two measurements of the urban population has important implications for both the housing market and economic growth overall. The mantra over the past several years has been that urbanization drives growth and will continue to do so into the foreseeable future. This seems obvious given the wide variety of studies that estimate China will become 70 to 80 percent urbanized by 2030.

However, these potential middle class consumers are a lot fewer in number than most people acknowledge. Those most likely to join the middle class are official urban residents, the 35 percent of the population that have full access to social services. This is much lower than the 50 percent number that is frequently thrown around.

The other 210 million urban residents are mostly poor migrant workers and are more loosely tied to urban life. These people have migrated to the cities to find jobs in factories and construction projects. They often live in employer-provided dormitories and remit a large percent of their income back to their home villages.

To put it simply, for migrant workers, economic growth drives urbanization, not the other way around. Were growth to slow down precipitously, many would leave urban areas and return to the countryside.

Moreover, given their low incomes most are in no position to buy an apartment in an urban area nor are they likely to become traditional middle class consumers.

Even for rural residents added to urban areas through reclassification, the change is not always positive. For many, reclassification corresponds with a property developer seizing their land and offering paltry compensation in return. Rural dwellers urbanized in this manner are also unlikely to become part of China’s burgeoning middle class.

These two groups, migrants and reclassified urban residents, account for 85 percent of the increase in urban population. Most of the people in these two groups are not on the verge of becoming middle class consumers, nor are they in the market for an expensive urban apartment.

It’s hard to deny that China’s urbanization trend is large and historic, but it is also over exaggerated. Absent large scale reform of the hukou system, hundreds of millions of Chinese workers will be unable to become fully urbanized and join a consumption-oriented middle class. Those who claim that economic growth will sustain rapid urbanization must take these limitations into account.

It is true that the Hukou system has some demerits. However, it does act as an effective cushion to historically large scale reform.

Interesting analysis of the urbanization rate. It's great to see you take into account the issues of the current hukou system, which many optimists ignore in claims of China's potential for a growing middle class. There's also a major conflict between developers wanting to build luxury apartments that brings in higher profit margins, and the government wanting them to build more social housing that new urban migrants may be able to afford. Is there a chance the central government will be able to force developers to supply affordable housing for the migrant influx? I've heard that half the population of the residents in most major coastal cities don't have proper housing, living in temporary dorms. Without a change to the hukou, I don't expect the middle class to grow nearly as much as a lot of China watchers predict.

I also wonder how much the central government actually wants to support a growing middle class. With economic stability comes widespread education.....

Thank you for every other great post. Where else may just anyone get that type of info in such a perfect manner of writing? I've a presentation next week, and I am on the search for such information.

The key phrase of the article is:
"...For migrant workers, economic growth drives urbanization, not the other way around." Using something as fungible as the urbanization rate to make economic arguments is dangerous. Consider how it is used:
- To describe expensive land prices as rational.
- To argue that millions more construction units are justified.
- To argue for a much longer high-GDP growth environment.
- To argue that hukou policies are somehow beneficial in aggregate. All of the above point to how distorted the pictures of China really are. They are all cases where China-specific "logic" dominates - where measures like the urbanization rate are used to defend or argue almost anything.

I would agree that the "middle class" isn't going to grow as fast as some have predicted (at the moment China lacks mechanisms for creating a middle class); but urbanisation is very unlikely to slow or reverse. The idea that long-term urban residents will "go back to the countryside" is crazy. There's nothing in the countryside. They would rather be beggars in the cities than go back there. There was a big test of this in 2008-9, when people did leave the coastal conurbs in large numbers as exports fell. But they didn't go back to the villages. They went to inland urban areas.

China usually has an image go future super-country, and optimistic forecasts are frequently seen. Also, in fact, it is now a big economy unit in the world financial system. But there are potential risks, and it must make adjustments to acquire future development. This is a report I wrote recently about China's economy, and it can be found http://daxueconsulting.com/china-economy/. Hope to exchange ideas.