The reforms are a step in the right direction but we should not expect a Chinese “Temasek” to emerge anytime soon.

Since the late 1990s, China has adopted a strategy to reforming state owned enterprises similar in principle to Singapore. State-owned enterprises are repackaged into shareholding companies, and eventually publically listed on equity markets. Non-state investors can then take minority positions in state-owned firms. The belief is that with the introduction of minority shareholders and an improved corporate governance structure, state-owned enterprise will improve performance, thus delivering a higher return on state assets.

However, China’s own experiments with corporatization and listing have not been as successful.  First, corporatization has proceeded at a painfully slow pace. Ten years after China established the State-owned Assets Supervision and Administration Commission (SASAC) to streamline the restructuring of state firms only 50 percent of state-owned firms have been corporatized. And the state retains control of 75.4 percent of the equity of all state-owned and state-controlled firms, leaving little room for minority investors. 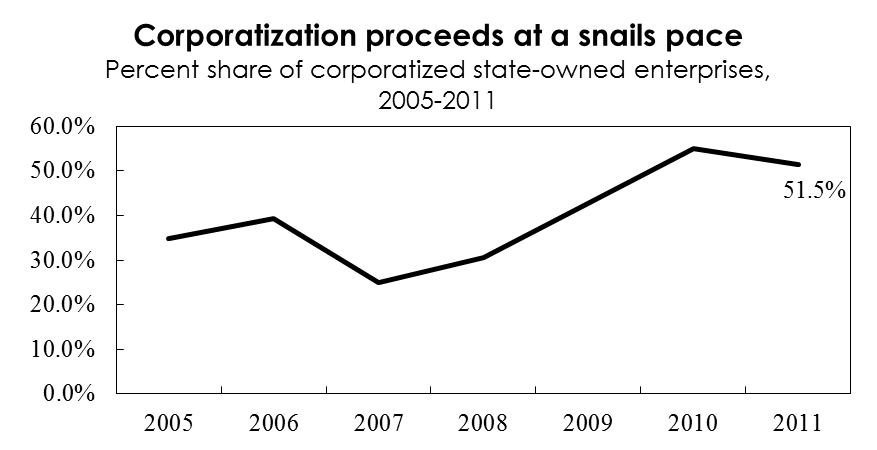 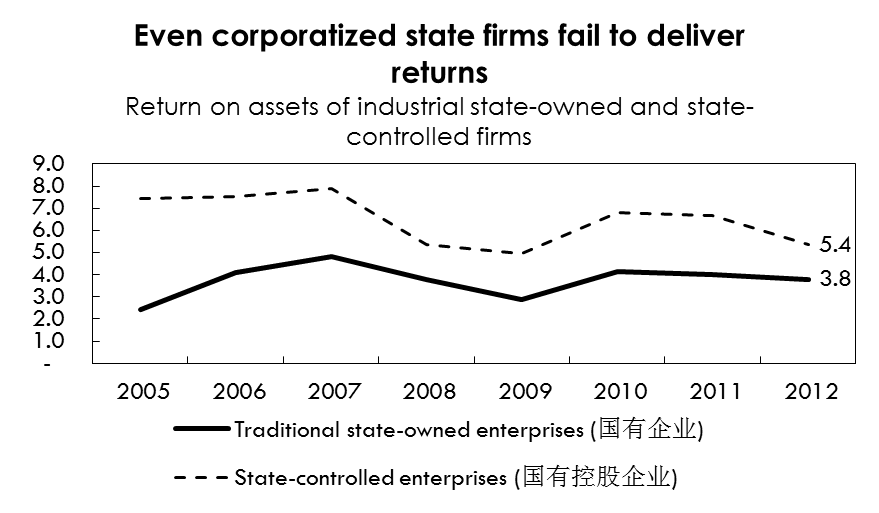 One of the key differences between the China model and the Singapore model is the failure to manage state assets on a commercial basis. In theory SASAC is supposed to enhance the performance of state assets. However in practice it acts more as a supervisor for the corporate governance reforms of state-owned enterprise, leaving operational decisions and investment responsibilities at the central level to 115 unlisted state-owned groups.

Presumably this could begin to change with the new reforms. For example, in Shanghai, a local asset management company is reported to be taking over equity ownership of seven listed state-controlled firms from four unlisted state-owned group companies, including the listed SAIC motor group limited corporation (上海汽车集团股份有限公司) - China's largest automaker by sales. SASAC has said that these investment management companies will be tasked with improving the allocation and quality of state assets in such a way that increases value (改善国有资本的分布结构和质量效益，实现国有资本的保值增长).

Yet even with the owner and the manager separated, there is no guarantee that China’s state-owned investment companies will operate on a commercial basis. For example, Central Huijin (中央汇金) - a subsidiary of China Investment Corporation and the Ministry of Finance – is already managing state equity positions in China’s state dominated financial sector. However, Central Huijin’s role has namely been to prop up the share price of struggling banks rather than maximize the investment of state assets in accordance with market principles.

In contrast, Temasek was committed to selling underperforming state-owned assets, and even investing in private or foreign companies to improve the performance of its portfolio. Of the 35 state-owned companies in Temasek’s portfolio at inception, only 11 firms remain. The rest have been divested or liquidated. Today only 30 percent of Temasek's portfolio is exposed to Singapore.

The performance of state firms, whether corporatized or not, are also unlikely to improve without more competitive markets. Temasek’s success was related to the liberalization of state dominated sectors. For example, the telecommunications market was liberalized in 1998, exposing the Temasek-owned - Singtel - to competition from private players, such as M1 Limited. Financial services have also long been exposed to domestic and foreign competition in Singapore. The state-controlled – DBS bank – only controls about two-fifths of the assets of domestic-owned banks. As a city-state Singapore industries – whether state or private-dominated – are also inherently more vulnerable to foreign competition on services then large territorial nations like China.

The success or failure of China’s state-owned sector ultimately will depend on the leadership’s commitment to open and competitive markets made in the third plenum. This will make it easier for managers of state capital to allocate resources to firms that generate the highest returns rather than cling to the hope of mechanically improving legacy state-owned enterprises.