For the uninitiated, when looking at China from afar it is easy to assume that in a “socialist-market economy” the state would play a significant role in employment. Even for seasoned China watchers, it is easy to fall into the misconception that the painfully slow pace of economic reforms during the Wen Jiabao and Hu Jintao era of the past decade led to a rebound in the state-owned enterprise sector, unraveling the mid-1990s downsizing of Premier Zhu Rongji.

This misconception exists because China’s state sector is vast. State employment is a large apparatus including schools and hospitals, communist party organs, social organizations, government agencies and organizations, state-owned enterprises, and corporatized companies majority owned by state-owned groups (state-controlled enterprises). China’s labor statistical yearbook provided by the Ministry of Labor and Social Security showed the sum of all employees in all these groups to be 77.6 million people in 2009. To put this number in context, the number Chinese workers employed by the state is close to the size of Turkey’s entire population and larger than the populations of many countries, including Thailand, France, and the United Kingdom. 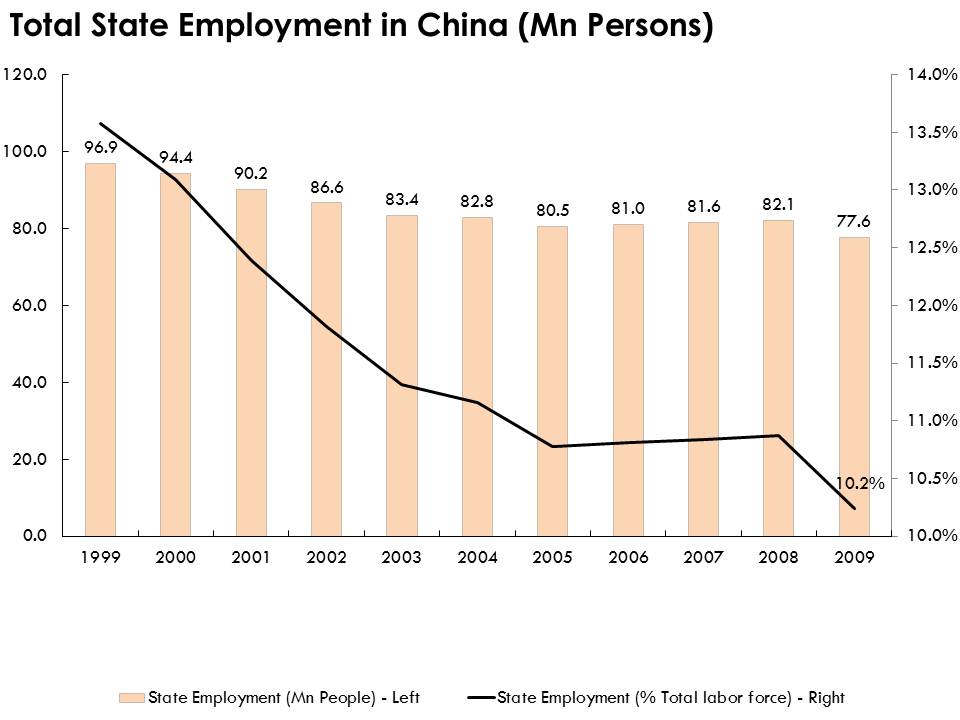 Although the number of state workers is large in absolute terms, relative to size of China’s labor force, state employment is not only small but shrinking. Since 1999, China’s state employment has fallen from 13.6 percent of total urban and rural employment to 10.2 percent of total employment in 2009. The key explanation for this decline is the continued consolidation of the state-owned enterprise sector since the late 1990s. State-owned enterprises and state-controlled enterprise employment fell by 37 percent between 1999 and 2009. In contrast to the prevailing view of rising state influence in the Hu and Wen administration, the number of state employees continued to fall during most of their administration, down 25 percent between 2002 and 2009.

It is worth noting that while state-owned enterprise downsizing has brought down overall state employment levels, state employment in other areas has increased. Between 1999 and 2009, employment in state institutions and government agencies and organizations rose by 7.6 percent. State institutions include educators, scientists, health workers, and cultural entertainers while agencies and organizations include police officers, judges, and other state administrators. Some of this increase could be attributed to Hu and Wen administration efforts to increase expenditure on social services or tightening of domestic security. During their first 7 years in office, non-enterprise state employment rose by 10.1 percent, reaching 40 million employees.

Yet even with some growth in China’s bureaucracy, overall state employment levels remain well-below that of other countries including the United States. Data from the Bureau of Labor Statistics shows that total non-military US federal and local government employees represented 16.9 percent of the total labor force in 2011. In fact the US number for state workers may even be an under estimate, considering it does not include the growing contingent of contractors. The International Labour Organization also provides comparable data for public sector employment (including state-owned enterprises) in other countries. In Germany and France, state sector employment stood at 15 percent and 26.7 percent of their total labor force employed by the state respectively. 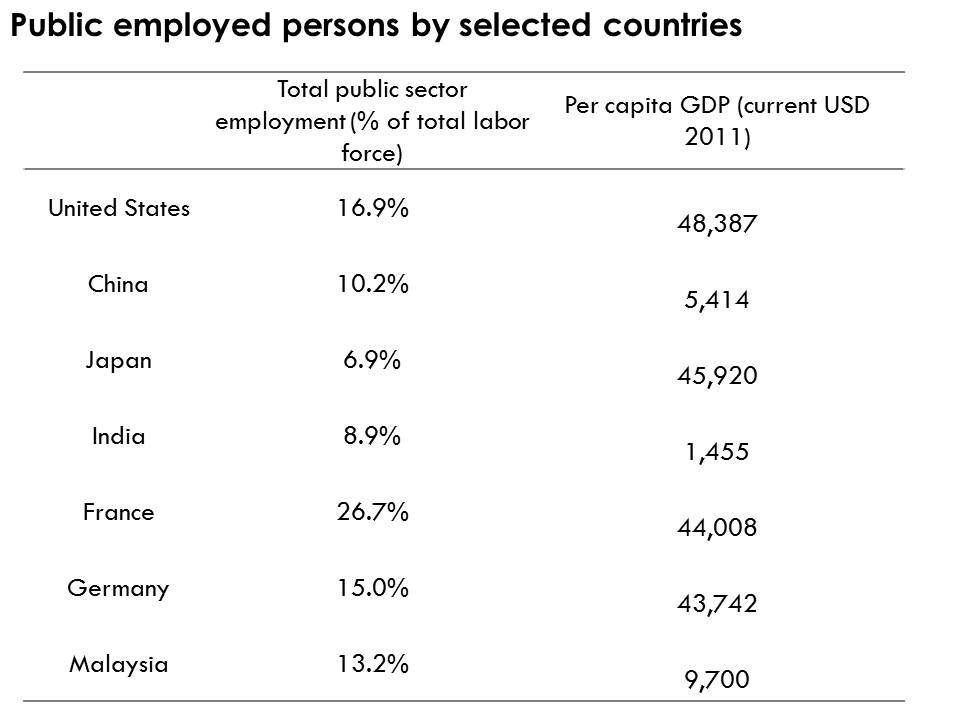 The number of state employees in China is large but consistent with international norms and shrinking. It is unclear whether this trend will continue as relatively low gross government debt to GDP and economic rebalancing favoring household income growth could push state sector employment up in service providers, such as health care, education, finance, and transportation. Yet this need not be the case. The example of Japan shows that further reforms to encourage private participation in these sectors could allow China to continue downsizing its state sector even as per capita income grows.

Even if China's state sector employment were to increase in the future, it would be in line with established norms in economic development. More importantly, this data suggests there is little validity in the assumption that the state dominates employment in China any more so than any other country at a similar per capita income level.