Shadow Deposits in the United States and China

Shadow deposits are investment products that act as a substitute for traditional bank deposits. Unlike bank deposits, shadow deposits lack the protections put in place to prevent bank runs. In the United States these protections are FDIC deposit insurance, access to the lender of last resort, and capital buffers. China lacks a deposit insurance system, but deposits at major banks are protected via a strong implicit guarantee of government support and banks have strict capital requirements.

In the United States shadow deposits come primarily in the form of money market mutual funds (MMFs) while in China they are wealth management products (WMPs). While MMFs and WMPs are structured somewhat differently they share a common origin: regulatory arbitrage.

MMFs first emerged in the United States in 1971. The catalyst for the creation was a mismatch between short-term interest rates and the controlled interest rate on savings deposits. These interest rate controls were put in place to prevent banking instability in the wake of the Great Depression. Due to inflation spikes during the 1970s, short-term interest rates on low-risk  assets such as US Treasuries shot up above the level allowed on savings deposits.  Money market funds emerged as a way to offer this investment channel to smaller investors, allowing them to earn a higher return than what was available on savings deposits. Money market funds grew rapidly because they were not subject to the same restrictions banks faced on deposit rates and interstate activity. 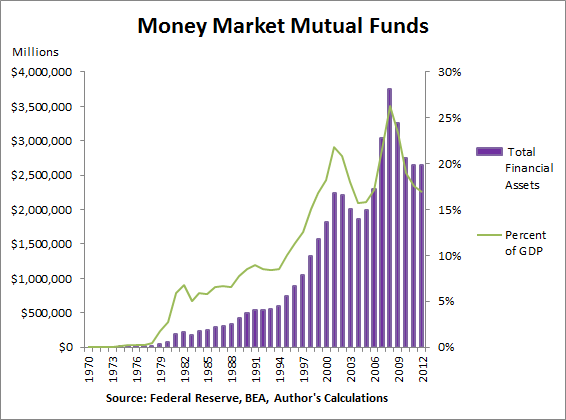 WMPs first emerged in China in 2004 and have grown rapidly, particularly in the past few years. The primary driver of this has been China’s low interest rate policy on deposits. The People’s Bank of China (PBoC) sets a low ceiling on the interest rate that can be paid on savings deposits in order to keep banks profitable. This policy was a byproduct of China controlled exchange rate regime which forces the PBoC to sterilize large amounts of foreign currency market intervention. To accomplish this, the central bank had to continually raise the required reserve ratio, increasing the amount of funds banks had to deposit with the central bank. To compensate banks for putting so much cash into these low-yielding accounts, the central bank established a healthy interest margin for banks by capping deposit rates and putting a floor on lending rates. 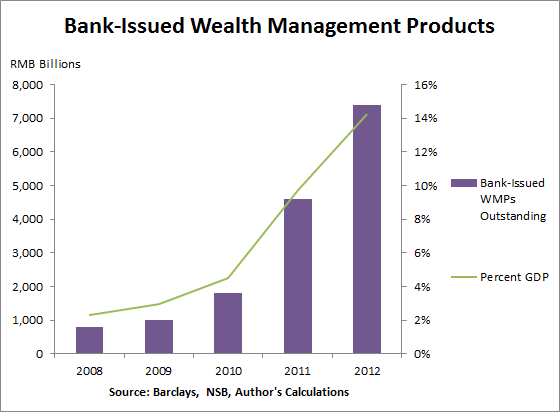 In both the United States and China, the growth of shadow deposits was driven by regulatory arbitrage to avoid restrictions on deposit interest rates. More by accident than design, both MMFs and WMPs have grown into an important source of short-term financing for both economies, with widespread participation by household investors. In the United States MMFs are equal to 17 percent of GDP. Bank-issued WMPs are equal to 14 percent of Chinese GDP. Adding in third-party WMPs issued by trusts and securities companies brings the total to 17 percent of GDP, equal to the American level.  While money market mutual funds have plateaued in size in the United States, Chinese wealth management products continue to grow robustly.

Lacking the normal regulatory safeguards imposed on banks, shadow deposits are vulnerable to runs. This creates a source of financial instability in short-term credit markets and poses a danger to the overall economy. This risk was made apparent during the 2008 financial crisis. The Reserve Primary Fund ran into trouble when Lehman Brothers defaulted in September 2008. Due to its loss on Lehman’s commercial paper, the Reserve Primary Fund was forced to place restrictions on withdrawals. The action created panic amongst investors that quickly spread to other money market funds. Reminiscent of a bank run, there were rapid and large withdrawals from money market mutual funds, with $300 billion withdrawn from funds during the week of September 15, 2008.

Four days after the collapse of Lehman Brothers, the US Treasury was forced to announce ex-post deposit insurance for all MMF investments prior to Lehman. The turmoil in the market led MMFs to reduce their large holdings of commercial paper which caused chaos in the commercial paper market. The Federal Reserve was forced to establish the Commercial Paper Funding Facility (CPFF) to restore the market.

Is China vulnerable to this same type of risk? WMPs are mostly closed funds, meaning investors cannot withdraw before maturity, but the maturity for two-thirds of products is less than three months. This means that any slowdown in the rate at which investors buy new products and rollover existing ones could lead to a rapid decline in the WMP market. Because many invest in relatively long-term illiquid securities,  a decline in the sale of new WMPs could imperil the ability of banks and third-party issuers to pay off maturing WMPs. This is the liquidity risk incoming CSRC chairman Xiao Gang identified as fundamentally a Ponzi scheme. Additionally, a decline in WMPs would shrink  China's short-term financing markets, putting stress on corporations dependent on access to short-term financing.