Shadow banks in China come in a variety of forms and guises. The term is applied to everything from trust companies and wealth management products to pawnshops and underground lenders. What surprising is that China’s biggest shadow bank is actually a creation of the central government and receives billions in financing directly from the banks.  Even more interesting, this shadow bank recently pulled off a successful international IPO where it raised billions of dollars.

First, let’s deal with the terminology. The “shadow” in shadow banking doesn't imply nefarious doings, although it frequently involves a bit of regulatory arbitrage. At the most basic level, shadow banking is borrowing funds and extending credit outside of normal banking structures.

So what is this mysterious shadow bank that has such tight government connections? It’s none other than Cinda Asset Management Company, a creation of the Ministry of Finance (MoF) and the beneficiary of a recent 2.5 billion U.S. dollar IPO in Hong Kong.  In terms of total assets, Cinda is more than 15 times as large as any of the country's trust companies.

The normal business of a distressed asset management company (AMC) is not shadow banking. It involves purchasing troubled loans at a discount and trying to collect a higher amount from the debtors. Cinda was one of the four AMC’s created by the central government to bailout the banking sector in the 1990s. The initial round of bad debt purchasing was policy-directed, starting in the late 1990s and lasting through the mid-2000s. In the second half of the 2000s, the big four AMCs began to purchase NPLs from banks on commercial terms and in the process tried to transform themselves into market-oriented businesses.

Over the last three and a half years, Cinda’s business has diverged from this model. In addition to purchasing bad debts from banks and other financial institutions, it has accumulated a vast stock of distressed debt assets directly from non-financial corporations. 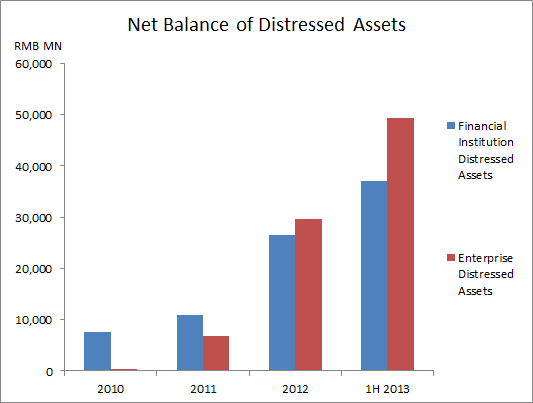 These non-financial enterprises distressed assets (NFEs) include overdue receivables, receivables expected to be overdue, and receivables from corporates with liquidity issues. In effect, Cinda has become a huge source of financing for companies facing financial distress.

It comes as no surprise that real estate developers have been the primary recipient of this emergency funding. Squeezed by central government efforts to dampen the housing boom, real estate developers are frequently cut off from formal bank loans.  As is the case with the growth of shadow banking in other parts of the financial system, Cinda has found a way to circumvent these restrictions by offering credit to property developers through the NFE channel. The Cinda IPO prospectus states that 60 percent of distressed receivables are attributable to the real estate sector.

What makes the whole situation a bit dubious is that Cinda has financed these purchases through a massive borrowing spree at below market rates. Over the last 3.5 years, the size of CINDA’s borrowings increased 13x, while the interest on these borrowings has fallen dramatically (paid interest was less than three percent). Despite the claim from the IPO prospectus that the borrowing was primarily from “market-oriented sources,” it seems unlikely that any market-oriented actor would loan out funds at a rate significantly below inflation and less than half of the benchmark lending rate.

The cost of funding issue is important because while Cinda’s distressed asset business is profitable, its profitability is dependent on low borrowing costs. In 2012 total interest expense is equal to 50 percent of its net income. A large increase in borrowing costs could wipe out the company’s profitability. 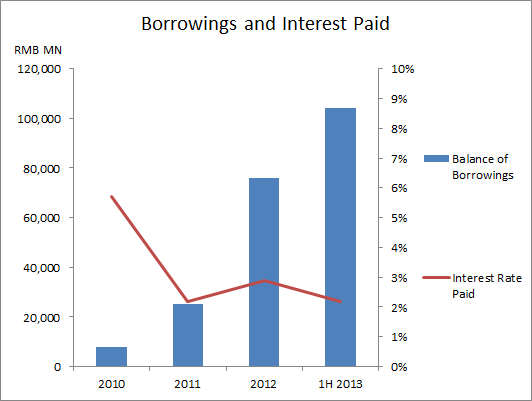 Why would financial institutions make such cheap loans to Cinda? One possible explanation is that the company’s tight relationship with the MoF makes it a low credit risk. MoF’s support of Cinda has been immense.  MoF has allowed Cinda’s corporate tax payments to be used to pay down the bonds it issued to China Construction Bank. MoF also gave Cinda a 25 billion renminbi capital injection with a delayed payback period. The odds that MoF would let Cinda go belly up are exceedingly low.

The other reason that financial institutions might be willing to loan to Cinda on the cheap is that the company has come to play a very useful role for them.  Commercial banks face constant pressure from regulators to reduce their non-performing loan (NPL) ratio. The strikingly low reported NPL rates throughout the past several years stands in stark contrast to a slowdown in economic growth and fluctuating credit conditions. Shadow lenders like Cinda play a role behind the scenes in extending credit to companies short on cash who are in danger of defaulting on their bank loans. Having this type of lender of last resort helps banks avoid increases in their NPL ratios. It doesn’t, however, reduce the exposure of banks to these distressed companies as they are still on the hook through their loans to Cinda.

The IPO prospectus of Cinda has made clear that the company has rapidly transformed itself from a traditional distressed asset manager to a provider of emergency financing.  Though we lack similar disclosure, it is likely that the other three national asset management companies are proceeding along similar lines. China’s AMCs are an important part of the shadow banking system and an enabler of large-scale regulatory arbitrage.

Nick: Great post. How does Cinda's interest rate compare with other "core" SOEs and local governments?

Hi Andy,
The latest PBoC data shows that only 11% of loans were made below the benchmark rate. Given that the 1-3Y benchmark rate stands at 6.15%, Cinda's comparative borrowing cost is very low. Bonds issued by SOEs and LGFVs are sometimes at lower rates, but are roughly in the same range.

source p375 CINDA IPO document
http://www.hkexnews.hk/reports/prelist/Documents/Ecinda-20131122-Full.pdf
Page I-50 of the IPO document gives interest payment by type of borrowing and I-113 gives the outstanding borrowing by type from you coud calculate the actual interest rate on borrowing.
Of course, CINDA still has its legacy debt to MOF and PBC which carries 2.5% interest that was used to (in effect) recapitalise the big banks nearly 10 years ago.
Hope this helps

Please forgive my naivete but doesn't what this mostly means is that the government, i.e. MoF, will probably continue to bail out entities like Cinda, whereas it will not bail out companies, i.e. property developers, who default. So...I draw a long breath...so it makes sense for companies to go shadow rather than mainstream. How does Cinda recover NPLs? I mean, do they seize assets and property?

Hi Richard,
Thanks for your comment. I calculated the interest rate paid by taking interest expense on borrowings and dividing by the balance of borrowings. This information is all available on page 58 of the prospectus.
Of course there may be some interest capitalization. This would raise the effective interest rate. I didn’t see a specific disclosure on this, so I calculated interest rate paid rather than the effective interest rate.
The amounts owed to the PBoC and MoF are relatively small compared to other borrowings at this point. The prospectus lists the outstanding balance of borrowing to PBoC at 6.9 billion rmb and MoF at 33.6 billion, compared to total borrowings of 104.1 billion.
My estimates seem to be in the same ballpark as other analysts. Goldman puts the average funding cost for Cinda at 1.9% and 2.8% for 2011 and 2012, respectively.
Best,
Nick