A survey in China last year found that 84 percent of Chinese were not concerned about leaving home without any cash—not because they relied on credit cards or checks, but because they were confident that their mobile phone payment methods like Alipay or WeChat would be accepted for any expenses they encountered. China seems, in this area at least, to have leapfrogged the United States, where Americans are wedded to plastic (credit and debit cards), as well as paper checks and cash. China would thus appear to be surfing the financial technology (fintech) wave of the future. How did that happen?

This blog post on the rise of online payments in China is the first in a three-part series covering recent fintech developments in China and their implications for global commerce.

The first factor in China’s rapid progress, ironically, is the backward state of China’s payment infrastructure in the early 2000s, when Internet companies were beginning to expand. Ecommerce firms were forced to develop their own payment tools to build nationwide businesses in ways that their counterparts in the United States were not. When American Internet companies began to take off in the 1990s, credit cards were ubiquitous and joined into international networks. American ecommerce sites simply needed to accept credit cards to handle payments from anywhere in the country and even abroad, and the ability to initiate a chargeback (easily cancelling a payment if goods ordered online never arrived) made buyers feel more secure. The chargeback is an often-ignored advantage of credit cards over debit cards and bank transfers.

In China in the early 2000s, credit cards were virtually unheard of, online banking was rare, and debit cards could not be used nationwide. In fact, it became a major policy objective of the United States to try to open China to American credit cards, a process that has dragged on for well over a decade and has only just now opened to a joint venture set up by American Express. An example of the primitive nature of China’s system back then was the payment process for the Chinese person-to-person auction website EachNet: Launched in 1999, the online company had to deal with the hassle of opening a separate account with each major bank in each city its customers lived in, because debit cards could only be used in the same city at the same bank that issued the card. To avoid dealing with this clunky system, , EachNet relied on its delivery people to accept cold cash on delivery for many of its online transactions. China UnionPay, a card network analogous to Visa and Mastercard, only launched in 2002 and gradually integrated previously fragmented systems between cities and banks.

Meanwhile, Tencent (China’s largest social and gaming company) and Alibaba (its largest ecommerce company) built their own payment systems to solve specific problems in their businesses. Tencent created a virtual currency called the Q coin in 2002 that its customers could use to pay for its digital products like items in games or digital outfits for a chat avatar. It functions like a gift card, allowing customers to make one clunky large payment with the banking system to buy coins and then transact easily online within Tencent’s systems using coins.

Alibaba launched Alipay (now part of Ant Financial) for use on its Taobao online marketplace in 2004 , which started with an escrow service for online purchases between parties who didn’t trust each other. EachNet had tried escrow services as early as 2002, but the service was expensive and did not take off.[1] Alipay’s initially free service was designed to hold payments until goods arrived, so buyers can trust Alibaba to give their funds back if the products are shoddy or never arrive. Sellers can trust it to confirm that buyers had put up the funds. A credit card chargeback fulfills virtually the same function in the United States, so American firms had less need to build their own payment systems to solve the trust issue. Credit card acceptance made escrow less important for eBay or Amazon.

The second key factor in the growth of online payments was Chinese government support. China’s 2004 electronic signature law provided legal certainty for online contracts, and a series of policy pronouncements starting in 2005 called for the “advancement of the online payments system.” It may be that EachNet’s escrow service failed partly because it came too early, before the signature law was in place, while Alipay came at exactly the right moment with far less legal risk. China’s central bank waited years before passing official regulation of the sector in 2010 and issuing licenses soon after, which allowed the market to develop largely free of compliance costs, entry barriers, and regulatory restrictions.[2] In the United States, by contrast, companies like PayPal had to go through an inefficient, fragmented state-by-state process to obtain money transmitter licenses.

Nonbank online payment systems like Alipay were thus almost a decade old when regulations came into play; by that time, they had reached critical mass thanks to network effects and the hundreds of millions of Chinese using smartphones, driving a shift from online to mobile payments. Nonbank online payments were catapulted into the world spotlight in 2013, when providers in China processed RMB 9.2 trillion in transactions (see figure below). Also in 2013, Alipay surpassed PayPal to become the world’s largest online payment platform. It is difficult to quantify growth before 2013, the first year for which there are official data on online payments volumes, because Alibaba and Tencent keep tight wraps on their data. Nonbank online payments grew at almost 170 percent in 2014, and soon after exceeded consumption spending on China’s 5 billion or so debit cards. 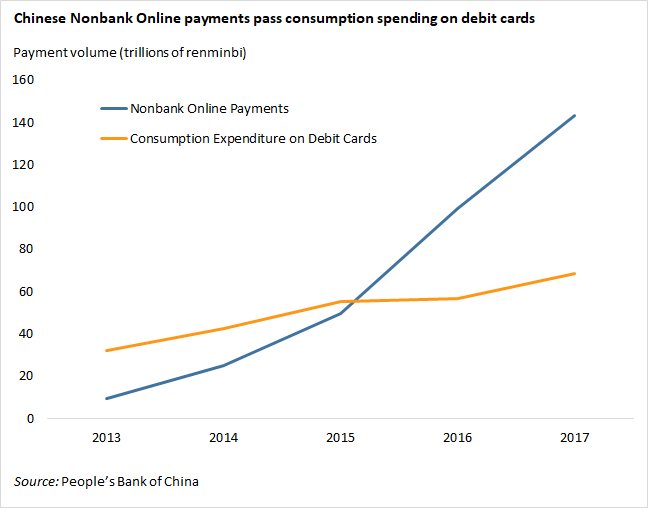 The success of online payments in China is the result of a symbiotic relationship with Internet firms, which provided the original use case for their payment business. Since ecommerce accounts for 17 percent of retail sales in China and only about half that, 8.9 percent, in the United States, online payments fit into the Chinese environment more than they have in the United States. Adoption for offline businesses, including tiny street vendors, has been helped along by their use of QR codes for in-person payments instead of near-field communications (NFC) or plastic cards. Offline merchants use the buyer’s smartphone camera to scan a printed code (or a scanner like those for bar codes that can scan a QR code on the buyer’s smartphone screen). This method is far easier than setting up an expensive point-of-sale machine connected to a network, though firms like Square have made it cheaper and easier to do so in the United States.

Tencent and Alibaba's Ant Financial expanded into financial services like lending and asset management only after online payments were well entrenched. One key lesson from China’s experience is that these changes do not occur overnight. It took years to develop this infrastructure and for enough consumers to trust Internet companies with aspects of their financial lives. But perhaps most importantly, fintech innovation came about because a few companies would not accept missing pieces of their environment as a given. They built new, more efficient systems rather than waiting for incumbents to do it for them.

1. eBay’s early escrow offerings struggled to get off the ground in the early 2000s as well.

2. Foreign companies, however, were effectively barred from operating payment companies in China. This freedom was for Chinese companies only.

Who Likes Facebook's Libra Currency? Not the Chinese