Why China’s command and control equity markets are no fun

When Guo Shuqing took over as head of the China Securities Regulatory Commission (CSRC) in October, there was great hope that he would push forward more reforms to make equity markets – only accounting for 3.6 percent of total financing today - a better source financing for the majority of firms.

For the most part he has come through on this promise: streamlining the listing process, calling for more dividends for investors, cracking down on insider trading, allowing more foreign institutional investors to enter the market, better pricing for IPOs, and delisting poor performing companies, etc.

However, one area where he has not done so well is in reducing the tendency for state intervention to prop up markets. The government’s asset managers or state-owned enterprise groups own stakes in the numerous state-owned enterprises listed on mainland exchanges – accounting for 68 percent of all listed companies in 2011. While the majority of their shares have become tradable since 2006, there is still a large overhang of non-tradable shares owned by the state -- the equivalent of 7.4 percent of the Shanghai exchange’s market cap -- which have yet to enter the market, unlocking these shares can still affect market expectations. 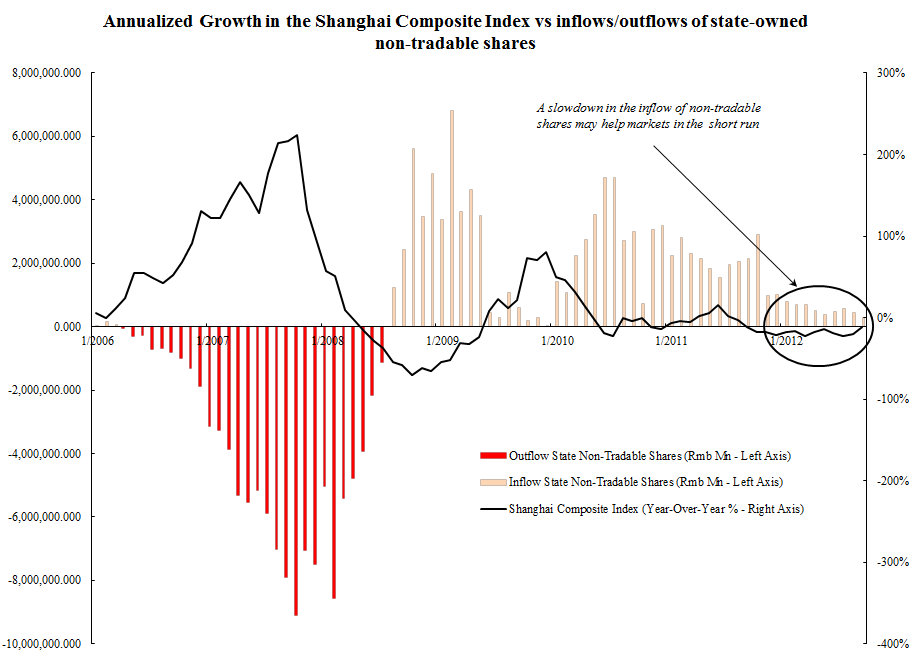 Last month, CSRC told over a dozen SOEs that they should prop up prices by buying back some of their floating shares. Some speculate that decision may have been political in nature, aiming to juice markets in the lead up to the meeting of the 18th party congress in November. This would effectively remove tradable shares from the market for a period of time, leaving investors unclear when and how they would be released back into the market.

The action is nothing new. Major state-owned institutional investors like the National Council for Social Security Funds (NCSSF) and Central Huijin are often used to stoke demand for equities in the bad times. Central Huijin in particular has been engaged in almost annual buybacks of major banks since 2008 to prop up markets - including a recent round of share purchases in October of this year. CSRC also periodically reduces or even cancels its stamp tax on stock transactions to stoke trading - a measure it was rumored to be considering this year.

CSRC’s call for more state intervention this year is disappointing, and perhaps a step back for Guo Shuqing after implementing so many much needed reforms. Although such buybacks may have short-term benefits to investors or even make room for the listing of better performing private companies, in the long run these actions simply make investors more concerned with the decisions of regulators than the valuation of companies and undermine the effectiveness of equity markets as a source of financing in China. Perhaps this may explain why Chinese equity markets remain a minimal source of capital for the majority of firms over two decades after the opening of the Shanghai Stock Exchange.

What can the European Union learn from America's COVID-19 vaccine supply chain policy?