The Economics of Nuclear Power in China

It should come as no surprise that the first reactor built in the UK in the last 20 years will be built with the support of Chinese nuclear power firms. China is currently leading the world in the number of nuclear power plants under construction and even after a post-Fukushima slowdown, it still plans to more than double its nuclear capacity by 2015, and quadruple it by 2020.  It will do this in part by keeping nuclear power profitable.

On this blog we have often discussed the implicit subsidies in the power sector. Controls on the price the grid pays power producers and the price the grid charges users have led to lower returns for the electric power sector, thus implicitly subsidizing the cost of electricity for industrial producers.  In particular, thermal power producers have struggled to maintain profits when on-grid tariffs fail to adjust to rising coal prices. 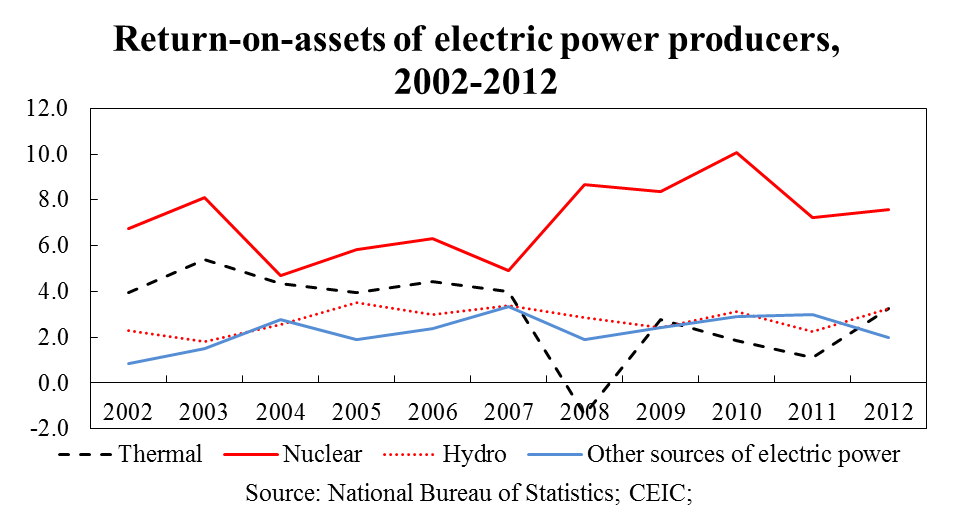 The higher profitability is encouraging more rapid growth in nuclear capacity. China has 59 plants planned and 30 reactors already under construction. Existing nuclear players are now planning on issuing shares to raise capital and support expansion plans. Thermal power producers are also eager to enter the nuclear power sector. How did nuclear power producers stay profitable while other producers have struggled?

The answer to this question is related in part to the nature of nuclear power but also China’s controversial system of price controls and subsidies:

First, nuclear power has lower input costs than most other forms of electric power production. The international price of uranium prices have increased almost as rapidly as thermal coal over the past ten years. However, uranium has a much greater energy density than coal and lower transportation costs, lowering the cost of fuel for nuclear power plants. Between 1998 and 2012, only hydro power producers were able to match nuclear power plants in terms of gross margins with gross margins almost three times higher than thermal power. 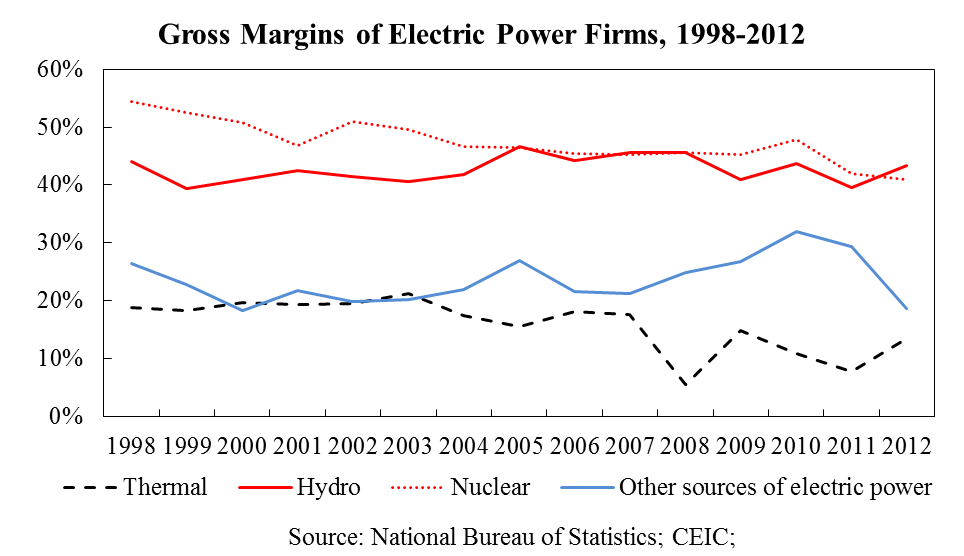 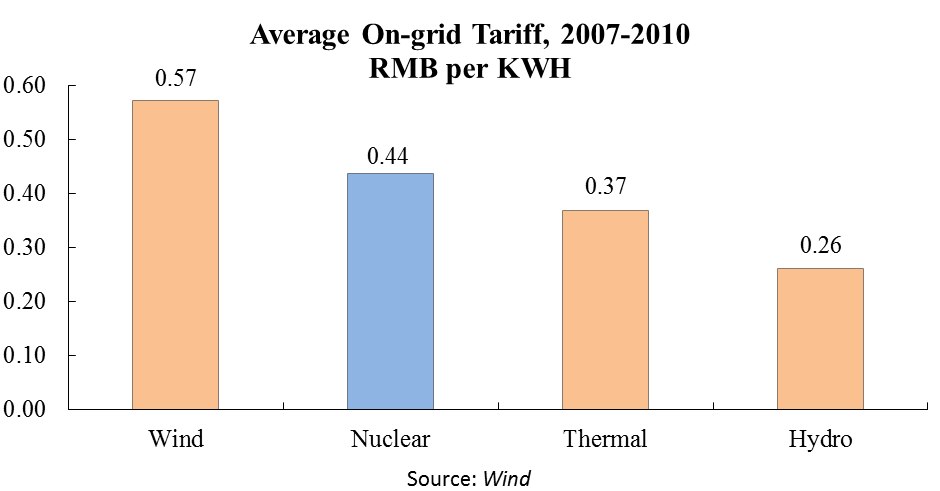 Third, unlike wind power, nuclear is relatively easy to connect to energy-intensive users on the east coast. Wind power has benefited from high on-grid tariffs in recent years, supporting a rapid build-up in capacity. However, much of this capacity still cannot be fully utilized for a couple of reasons. First, Wind farms are located in remote areas, often far inland requiring an expansion of the grid network and more advanced transmission technology to reduce loss when transmitting the electricity inland. Second, due to the variability of wind power production, full utilization requires technical advances in grid management still years away from widespread adoption (i.e. smart grid technology). 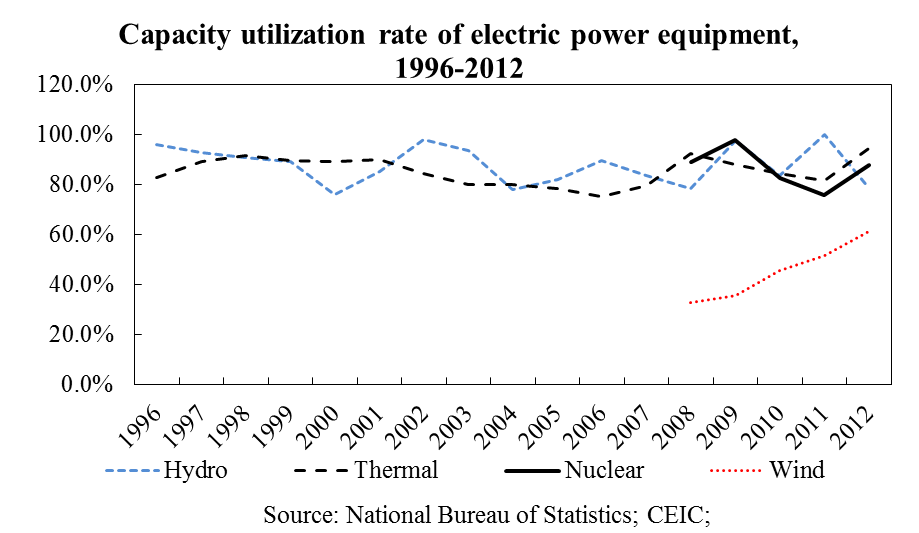 Fourth, nuclear power benefits from subsidized capital costs in China. As we have discussed frequently on this blog, controls on deposit interest rates lower the cost of capital for borrowers. According to a projection by the OECD the average investment cost of a 2nd generation nuclear reactor in China is more than double that of a large-scale thermal plant. But at a 5 percent discount rate – due to lower fuel costs – the cost of operating the plant is roughly comparable to that of a thermal plant. However, if the discount rate is doubled to 10 percent, than the cost of operating a thermal plant in China would be one-eighth lower than that of a 2nd generation nuclear plant.  This means that nuclear power producers benefit the most from artificially low interest rates.

But is this a good way to encourage growth in nuclear power? Certainly there are better ways to support the profits of nuclear power than financial repression or government-controlled pricing. For example, a market determined rate for electricity coupled with higher taxes for coal-fired plants is preferable to on-grid tariffs set by NDRC. This would improve the management of power utilities by allowing them to make commercial decisions based on a market demand rather than government-controlled pricing. In addition, from a rebalancing standpoint, it would be better if higher contract prices for nuclear power could be passed on directly to industrial users reducing the pressure to build up additional thermal capacity to keep pace with rising demand. These are the reforms China’s new leadership should consider going forward. In the meantime, if China is able to reduce dependence on thermal power with measures to shift profits toward cleaner power generation that is a welcome first step toward a cleaner China.

Informative article; here is my problem. As Minxin Pei never tires of pointing out, Westerners never tire of giving the Chinese sound advice, which of course they ignore: "market determined rate. . .preferable to NDRC." OOh!! Lets watch and see if the NDRC changes its ways after reading this article. If they do not, perhaps your next article might speculate why they continue in their less-preferable ways.

What Does China Want? Part II: Taking up the Wang Yi Proposal and the China-DPRK War of Words