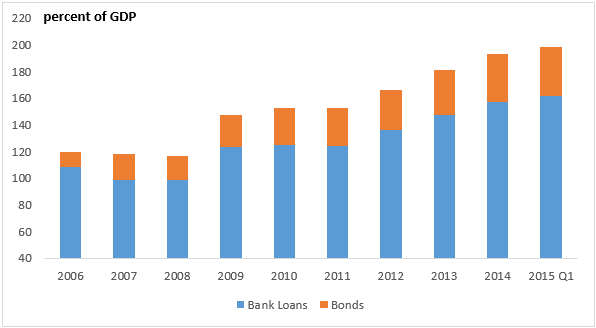 Increased borrowing by state-owned enterprises (SOEs) has contributed significantly to this rise, and SOEs account for around half of all the corporate debt in China.  But problematically, SOEs have a much lower return on assets than private firms, as low as one-third.  Which begs the question: If a large SOE is unable to pay its interest payments, what will the government do?  Will it take control of the debt, and will the debt therefore be counted as government rather than corporate debt?  This would do nothing to the overall credit-to-GDP ratio but may cause moral hazard.

Besides corporate debt from bank loans, China has seen dramatic growth of the corporate bond market.  Overall this growth is seen as a positive move, as it means the firms are either refinancing old loans with bonds at lower yields or simply expanding their balance sheets using the bond market rather than bank loans.  Also helpful is that the majority of corporate bonds in China are in renminbi, protecting them from foreign exchange fluctuations.  The International Monetary Fund reports that total bond issuance in China in 2014 was over $600 billion.

Real estate, construction, mining, and energy production have been leading the increase in leverage.  These cyclical sectors loaded up on credit after the 2008 financial crisis and have some of the most highly leveraged firms in China.

The rise in corporate debt in China is one of the most pressing issues for future growth.  A drop in corporate revenue could prompt a number of defaults, lowering overall economic growth and reducing revenue further—a vicious cycle.  Potential headwinds include normalizing interest rates in the United States, decreasing capital efficiency, disinflation, or a property market slowdown.  Moreover, banks lend about half of their loans to corporations, so a rise in corporate defaults could have broader banking implications, including liquidity concerns and nonperforming loans (see figure 2).  The biggest threat is slowing growth: China’s nominal GDP grew at 6.2 percent in the third quarter, which makes paying off loans more difficult. 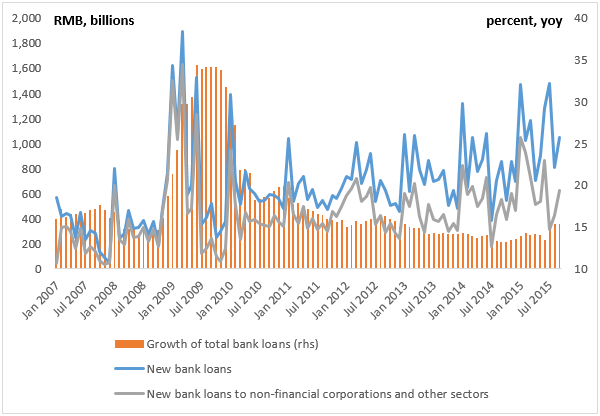 Moving toward more market discipline may help guard against slower growth and social instability.  Policymakers should try to suppress credit growth in highly leveraged firms.  They should also carefully watch systemically important firms that could be at risk and try and prevent a "Lehman" type moment.  Serious reform of SOEs is more important now than ever, and as one of China’s top economists, Liu He, recently noted, China has a need for “intensified efforts to shut down zombie firms and an end to overcapacity.”  These “zombie firms” are large and bloated SOEs, usually in an oversupplied industry, and are a drag on growth. Liquidating some of them could increase productivity in whole industries.  Policymakers could also direct a higher proportion of new loans to smaller, lower leveraged firms, with potentially enormous benefits.  Moreover, overall bringing credit growth below nominal GDP growth would ease long-term concerns.  Pushing through capital market reforms, especially opening up better paths for equity financing, could do just that.

From Credit to Crisis

What Geithner Should and Should Not Do in India